In May and June of 2011, I spent 5 weeks traveling around Europe. This post is one of a series chronicling the different places I visited on that trip.

After Cefalu, we headed to the resort town of Taormina, which ended up being one of my very favorite spots in Sicily.

We started out by attending a pizza making demonstration at Ristorante Pizzeria Villa Zuccaro. A man named Nino led the demonstration, and he told us he would share “some, but not all” of his secrets with us. It was fun to watch him work – and spin the pizza dough around. 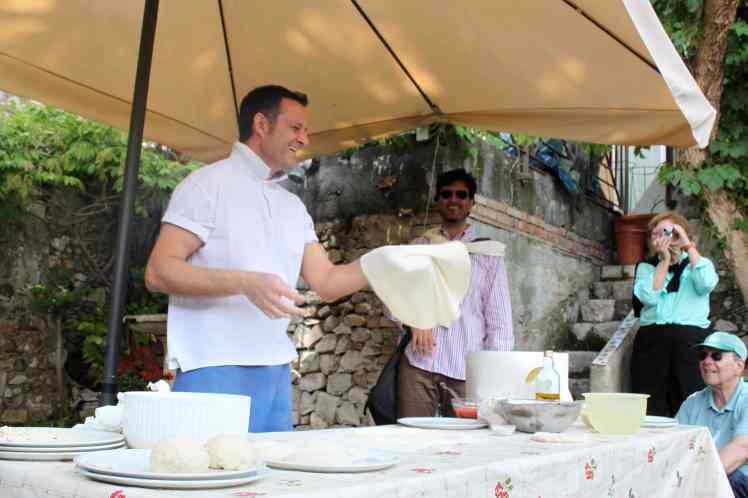 After learning about making pizza, we naturally got a chance to eat some pizza too – and it was delicious. We sampled several different kinds – in the first picture, we have pizza margherita and capricciosa (which is topped with things like ham, peas, hard boiled eggs, and olives. You might expect this to be gross – I  did – but it’s not). In the second picture, we have a pizza called “Regina di Bronte” and a four cheese pizza. We also had a mushroom pizza, though I didn’t get a picture of that one.

All of the pizza was excellent, but for my money, the simplest pizza – margherita – was the best. I had it again and again in Italy, and I never regretted a bite.

After lunch, we took a walking tour of Taormina. The town, located right on the water, was just lovely: 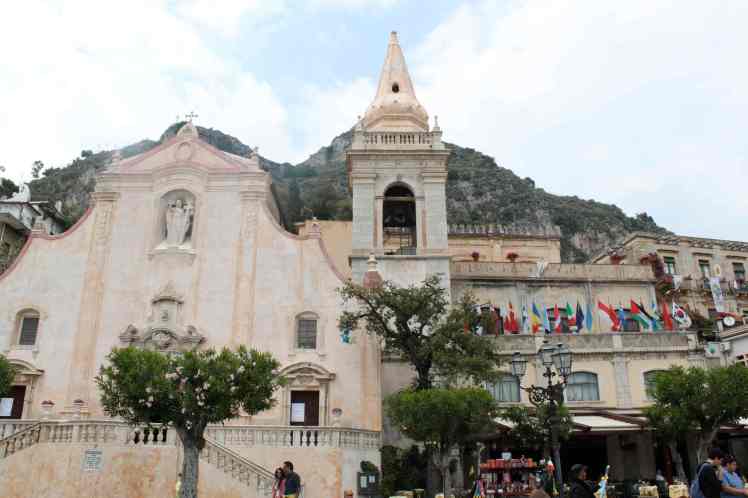 My main impression of Taormina was flowers – they were everywhere you looked, but especially on balconies. I took what seemed like a million pictures of well-decorated balconies – I just couldn’t stop myself.

The highlight of the walking tour was the very last stop – a huge Greek theater. The theater is still in use today, and I kept thinking how cool it would be to see a performance there. Our local guide told us that, recently, Elton John, Sting, and Liza Minnelli have all performed there. Who knew?

After the theater, we were pretty hot from standing out in the sun all afternoon. On our walk downhill back into town, I saw a granita stand and knew we had to stop there. As for the taste of granita, the closest comparison I could make would be to a Slurpee, though I’m pretty sure they are made with fresh fruit in Sicily rather than some sort of processed Slurpee chemicals. Whatever the case – they were perfectly refreshing. 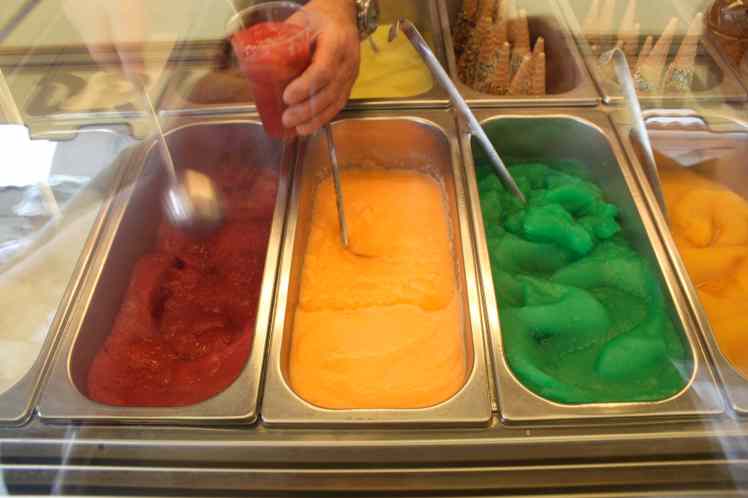 After a quick rest to enjoy our granita, we headed on to the botanical gardens. I really enjoyed the gardens – they were big and beautiful, had lots of interesting memorials inside them, and had great views of the water and of the city.

After the gardens, we continued exploring Taormina, poking into stores here and there and doing some shopping. Here are a few other things that caught my eye as we were wandering around: 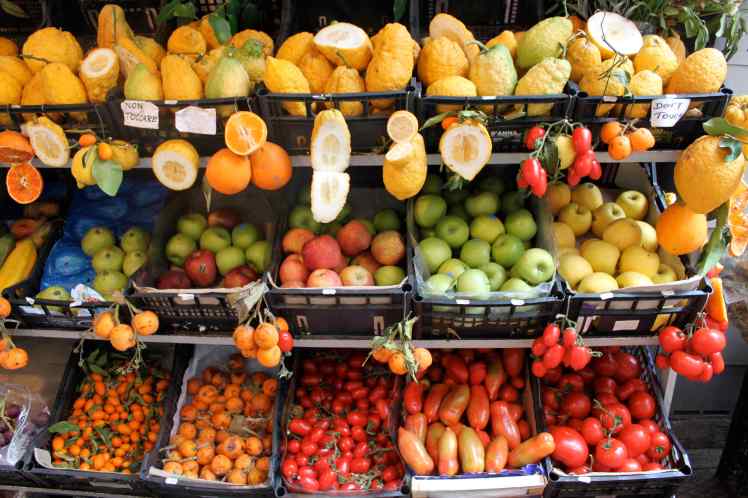 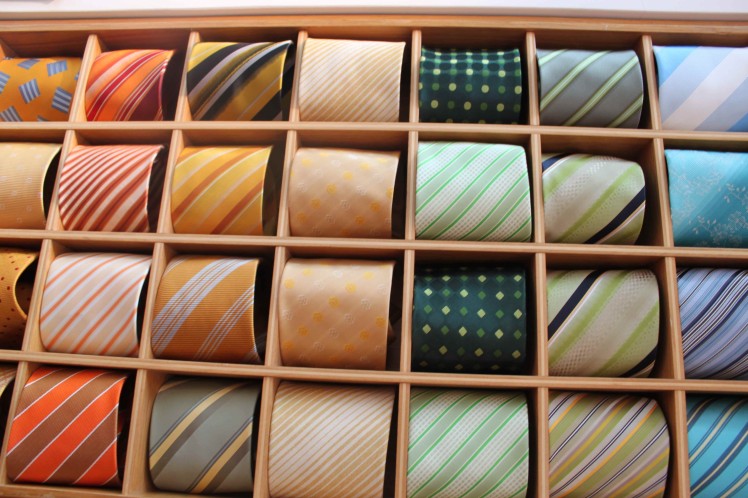 After we finished our shopping, we headed back to our hotel to rest for a bit before going to dinner. I had a great meal – fried mozarella balls for an appetizer, stuffed fish for an entree, and tiramisu for dessert. It was the tiramisu that I was most excited about. I had been on a quest to get real Italian tiramisu at least once during this trip. Mission accomplished!

The next day, we left Taormina (much to my chagrin – I wish we could’ve stayed longer) and headed to Mt. Etna. We were able to climb around a crater of Etna. Pretty cool:

It’s also amazing (and a little scary) to see and think about all the destruction a volcanic eruption can cause. We saw areas where lava rivers flowed, destroying everything in their paths and burying entire homes: 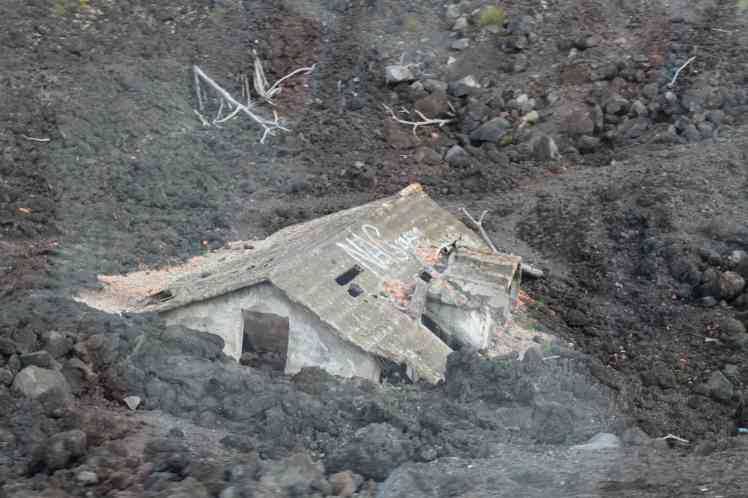 As we descended back down the mountain and I saw homes dotting the road, I started to wonder – why would anyone live nearby, with such a threat of imminent disaster present? But then I thought – disaster can strike in most places. A tornado in Missouri, a tsunami in Japan, a hurricane in New Orleans. Maybe there isn’t anywhere we’re truly safe, and so you go on living in a place you love, a place that’s home, no matter what.

And with that thought on my mind, our bus continued on toward the town of Catania. I don’t have any pictures there, because we made just one stop, and you weren’t allowed to take any photos. We visited the Museum of the Allied Landings. It wasn’t anything fancy, but I found it very thought-provoking, particularly because this is one area of WW2 I know little about. You always read so much about the landings at Normandy, but not so much about the landings in Sicily. I wrote in my journal that more troops landed in Sicily on July 10, 1943 than landed on D-Day. I want to verify that fact, but if that’s true – wow.

After the museum, we drove to the countryside (our guide said the nearest town was Lentini) and had lunch at the home of a contessa. We began with an outdoor antipasti buffet: 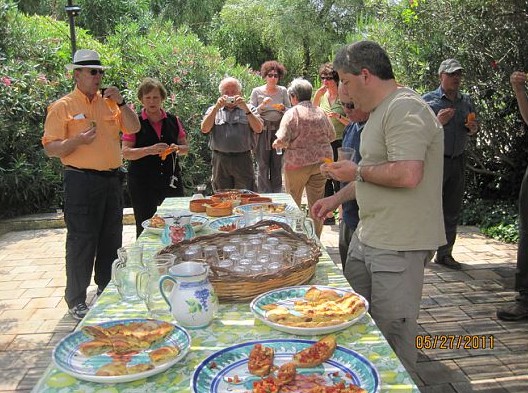 After our appetizers, a woman named Simona gave us a little demonstration on making Sicilian pesto. It turns out that it’s pretty much like normal pesto, except you throw in some cherry tomatoes for good measure.

And, naturally, once we had learned about the pesto, we had to eat something with pesto on it. We moved indoors and had a feast of a meal. We started with two pastas – one with the aforementioned pesto, another with lemon linguini. For the main course, we had veal, potatoes, and meatballs. And for dessert, we had a cup of fresh fruit with ice cream.

Before we left, I snapped a few photos around the contessa’s estate: 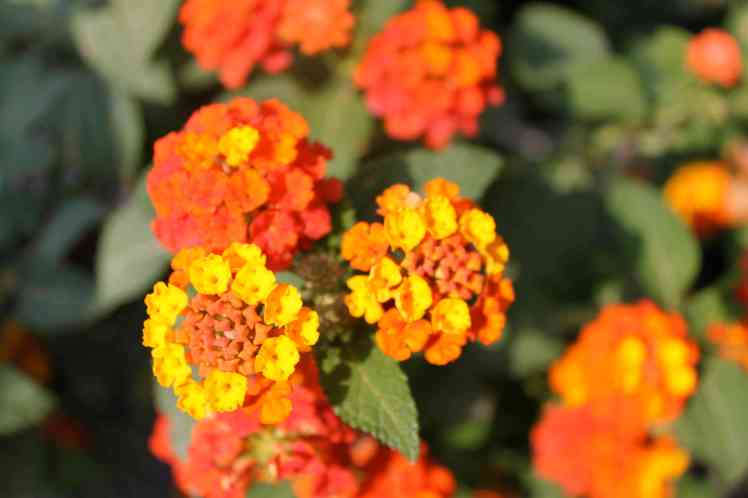 It was a lovely afternoon – next up, Siracusa!