In May and June of 2011, I spent 5 weeks traveling around Europe. This post is one of a series chronicling the different places I visited on that trip.

After our tour of Sicily ended, my mom flew back home and I flew to Paris to meet up with my sister for the second leg of my trip. I had a day in Paris to myself before my sister arrived, and though I initially had some grand plans for how I’d spend it, in truth I did little but relax and rest. I was staying in the La Defense area, using my Hilton points for a free hotel room. La Defense is basically the business district of Paris, and it’s very different than the Paris I usually think of – less old school charm, more modern day workaholics. The main thing I did was wander around La Defense and people watch, which was pretty fascinating in itself and minimally taxing.

The next morning I headed to CDG to meet my sister. We went from the airport directly to Gare de l’Est to take a train to Colmar, a small town in the Alsace region. When I originally planned out the trip, my sister looked at the itinerary and asked why we weren’t doing anything in France other than Paris – she wanted to go somewhere in the countryside and do some wine tasting. I know nothing about French wines, and I’m not sure if Alsace’s Rue de Vin is the best or most quintessential French wine experience, but it was the region that fit best with our travel path – so to Alsace we went.

We arrived in Colmar in the afternoon and walked from the train station to our hotel (a 10-15 minute walk, and not that difficult, but of course we got a little lost). We didn’t do much our first evening in Colmar – just walked around the town, explored a bit, and grabbed dinner (I had mushy Croque Monsieur – a bit of a letdown).

Our biggest discovery of the night was Cafe Le Michigan. We walked by it and did a double take – what was a University of Michigan cafe doing right in the middle of small-town France? Being Michigan alums, we were super excited about this. I still have no idea how or why the cafe came to exist in Colmar, but it’s completely awesome nonetheless. 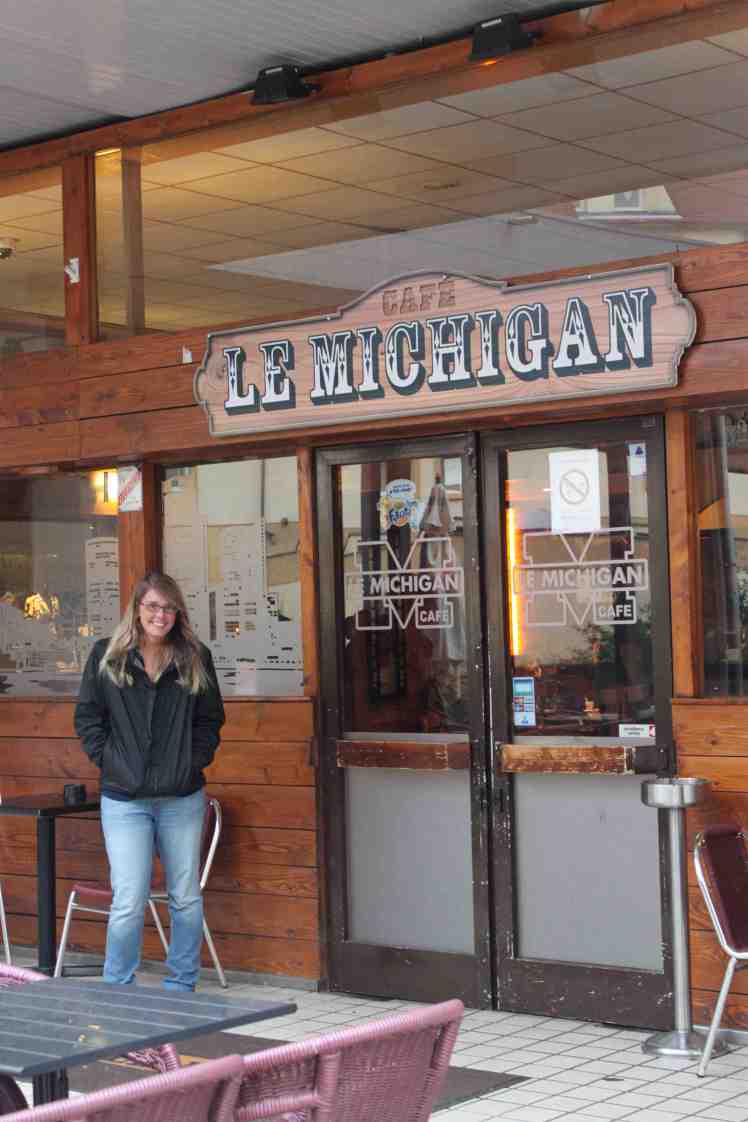 The coolest thing about Colmar is that it basically looks like a postcard – all the buildings have thatched roofs and are painted bright colors. It was overcast and rainy almost the entire time we were there, so I don’t think my photos really do justice to how pretty the town is. Here are a few of my favorites:

On our second day in Colmar, we spent the morning at the Unter der Linden museum. The neat thing about the museum is that it is a really quirky mix of things – the first floor has traditional Christian paintings and the second floor has a collection of completely random objects, from suits of armor to china to miniature dollhouses to everything in between. Perhaps I should have been the most impressed by the first floor, but it was the second floor that really caught my attention. Here are a few pictures from the second floor: 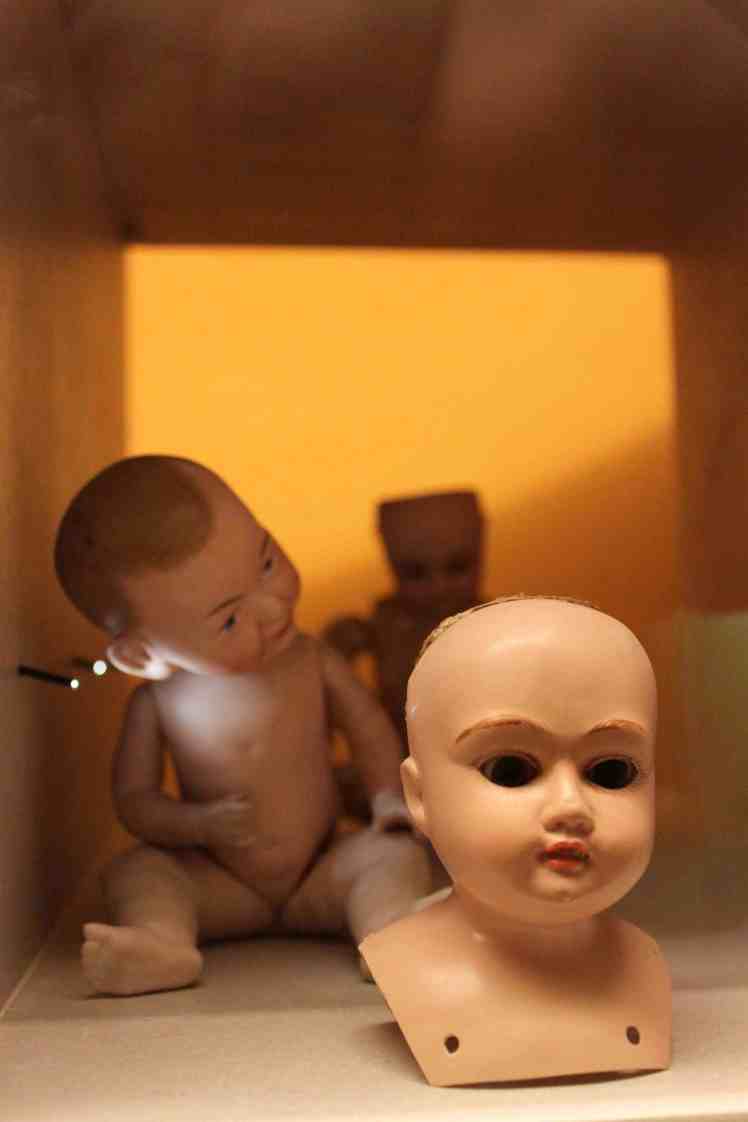 In the afternoon, we toured the Rue de Vin (wine road) with a small group of people. We started out at Haut Koenigsbourg castle, which was built in the 12th century, nearly destroyed, and later restored in the 1900s. 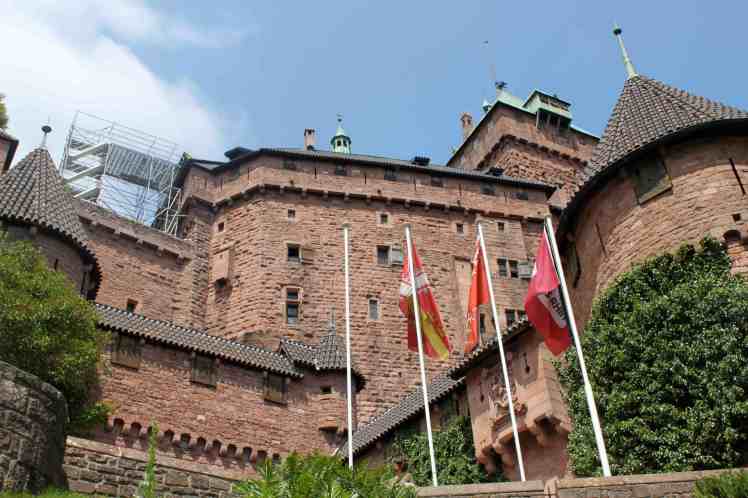 The castle wasn’t that fascinating, but my sister and I had fun wandering around it and taking silly pictures. While we were waiting for the rest of our group to finish touring it, we relaxed outside. Since we were up on a high hilltop, we had a great view of the surrounding countryside. And, inspired by the recent Rachel Bilson commercials, we each ate a Magnum ice cream bar. They looked super delicious, but were pretty much like any other ice cream bar…kind of a letdown.

From there, we headed into the heart of the Rue de Vin. We stopped in the middle of a vineyard to take some pictures – and I was amazed by the rows and rows of grapes that surrounded us everywhere, stretching as far as the eye could see. It was beautiful! 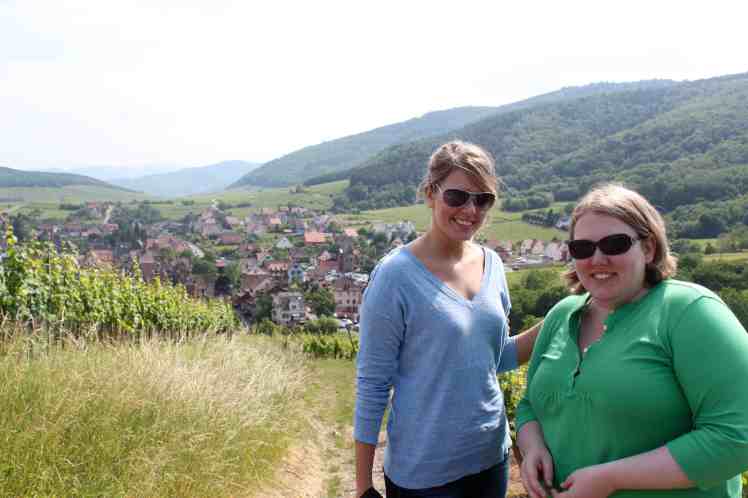 We headed on to the town of Riquewihr for a wine tasting at Maison Zimmer. We tried three wines: a Riesling, a Pinot Gris, and a Gewurztraminer. My favorite was the Gewurztraminer, but my sister thought it was too sweet, so we ended up buying a bottle of Riesling instead.

After our wine tasting, we had some time to explore the town of Riquewihr. Like Colmar, it is filled with brightly colored buildings. Our tour guide explained that, originally, the different colored buildings signified the occupation of their owners – green for gardeners, yellow for bakers, etc. Even though it was very crowded with tourists, I thought Riquewihr was quite charming. We stopped at a bakery to buy macarons and a Christmas store to buy an ornament for our mom.

In the evening, we headed back to Colmar and went to bed fairly early since we had to be up early to catch our train (or series of trains – it took 3!) to Munich. While Colmar wasn’t a super exciting destination, I thought it – and the Alsace region in general – was a lovely area.

The other thing our visit to Alsace made me realize was how much more of France there is to explore. So far, I’ve been to Paris, Normandy, and now Alsace. But there are still many, many more regions I want to visit. France is so large and diverse – I totally adore it!