I’m living and working in NYC this summer and, before arriving, one of my most stressful tasks was the housing search. We’ve all heard horror stories about New York’s housing market, and even as someone who was just looking for a temporary spot to call home, I was overwhelmed by all the options and logistics of finding a place. Because I just wanted to get the entire thing over with, I ended up choosing the very first place I found, simply so I wouldn’t have to worry about it anymore.

So, this summer I’m living in Gramercy Park, not because I had any particular desire to live in the neighborhood but because it’s home to the first acceptable building I happened upon. That said, one of the most pleasant surprises of my first week here has been discovering that, without even trying, I stumbled into a pretty nice neighborhood to spend my summer.

There are a ton of cool spots within easy walking distance of my building, and last week I visited one of them, multiple times. Madison Square Eats is a yearly food festival that runs for a few weeks each summer in Worth Square, just west of Madison Square Park and just north of the Flatiron. Because there were so many vendors I wanted to try, I visited on three different occasions last week, finding good stuff to sample each time. Here’s what I ate:

On my first trip, I started with a lobster roll from the Red Hook Lobster Pound. I had it Connecticut Style, meaning it was served warm. The roll was really, really delicious – but it was tiny, so I wouldn’t say it was quite worth its $16 price tag. I ended with a Red Velvet Ice Cream Sandwich from Melt Bakery, which was oh-my-god-I-can’t-believe-how-good-this-thing-is tasty and was possibly my favorite dish that I tried at Madison Square Eats. 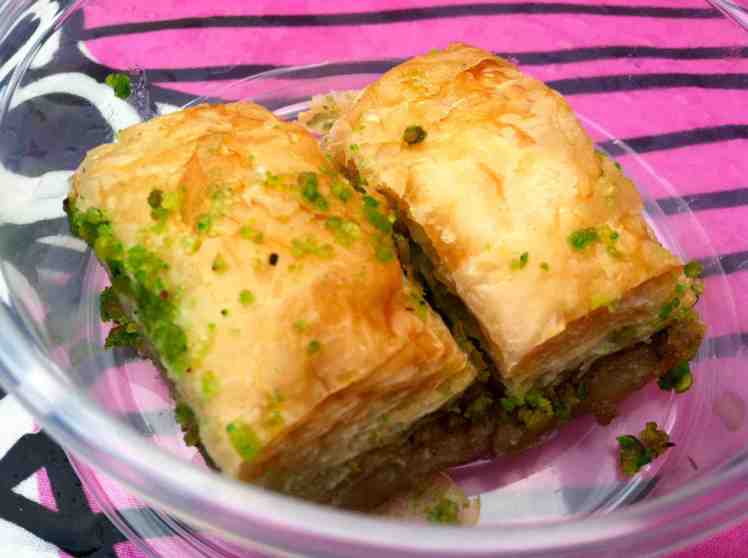 On my second trip, I had pork belly buns and spring rolls from Hong Kong Street Cart. The pork belly bun was very flavorful, while the spring rolls were a bit more standard – pretty much your garden variety takeout spring roll. One thing I didn’t realize is that for $6, you get six spring rolls! They’re small, but I still thought that was quite a few – so make sure to share with a friend, if you order them. For dessert, I tried the baklava from Mmm Enfes, which had all the elements of perfect baklava – sweetness, nutiness, and flaky pastry layers. So good! 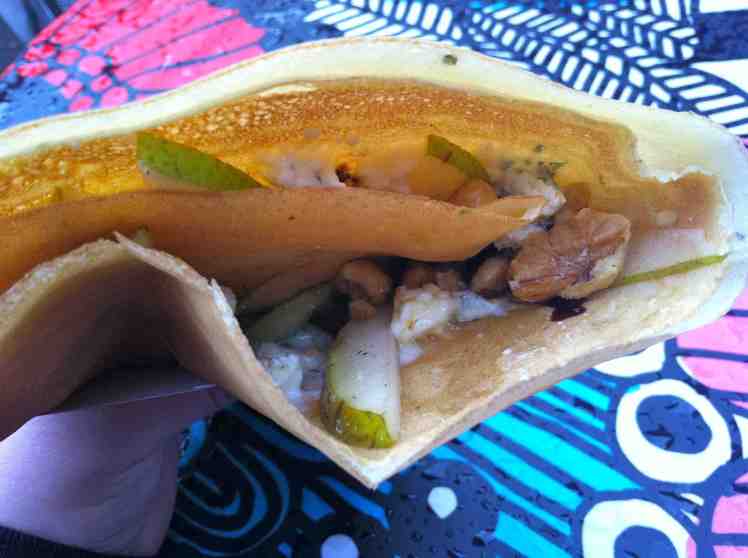 Finally, on my last visit, I ordered a pear, walnut, and gorgonzola crepe from Bar Suzette. I’ve had the pear-walnut-gorgonzola combination in other dishes before, and it was just as good as I remembered here (and was probably my second favorite dish, after the red velvet ice cream sandwich). The atmosphere of Bar Suzette’s stand was hip and fun, and made me want to visit the actual restaurant itself just to see if it’s similarly cool. I ended with a small cannoli from Stuffed Artisan Cannolis. I opted for the mint chocolate chip version, which I think was a mistake – I realized I’m more of a cannoli purist, and mint chocolate chip filling in a cannoli just seemed wrong to me. It wasn’t a bad cannoli, but it felt odd.

Overall, I had a fantastic time at Madison Square Eats (as evidenced by the return trips), and I’m totally looking forward to finding many more little festivals during my time in New York this summer. Madison Square Eats runs through May 31st, so if you’re in NYC, hurry up and go while you still can!