Way back in 2006 (cue panicked comment about how old I feel), I spent a summer in London. I totally fell in love with the city during my time there…and then promptly stayed away for the next seven years. So when I figured out that I could spend a few days there after visiting Ireland, I was excited to see how the city compared to what I remembered (spoiler alert: it’s still fantastic). And, because it would be my mom’s first trip to London, I was excited to make sure she saw all the big London “must-sees.”

After surviving our flight from Dublin to London – we had the great misfortune of sitting directly in front of a little girl who screamed bloody murder for large portions of the trip – we checked into our hotel and began exploring. First stop: Westminster Abbey. While I was dismayed by how crowded the Abbey was during our visit, it’s still pretty fascinating to walk around a place with so much history. As Joey Tribbiani would say: hands down, best Abbey I’ve ever seen.

Sidenote: When in London, it is absolutely essential to quote Friends as much as humanly possible. When lost, remember that you’ve just “got to get into the map.” When excited, feel free to shout, “London, baby!” 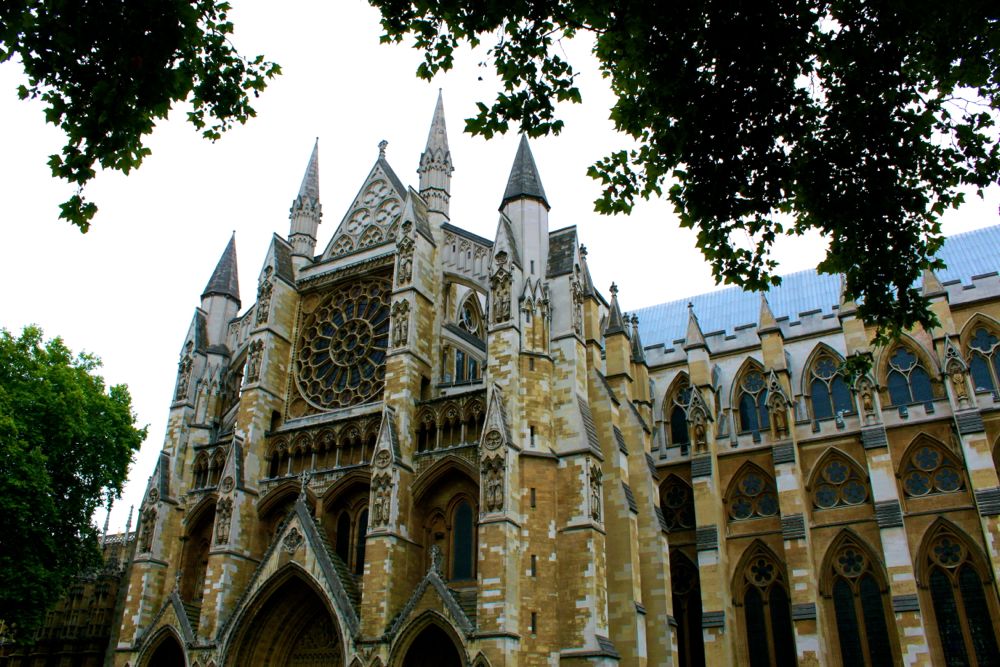 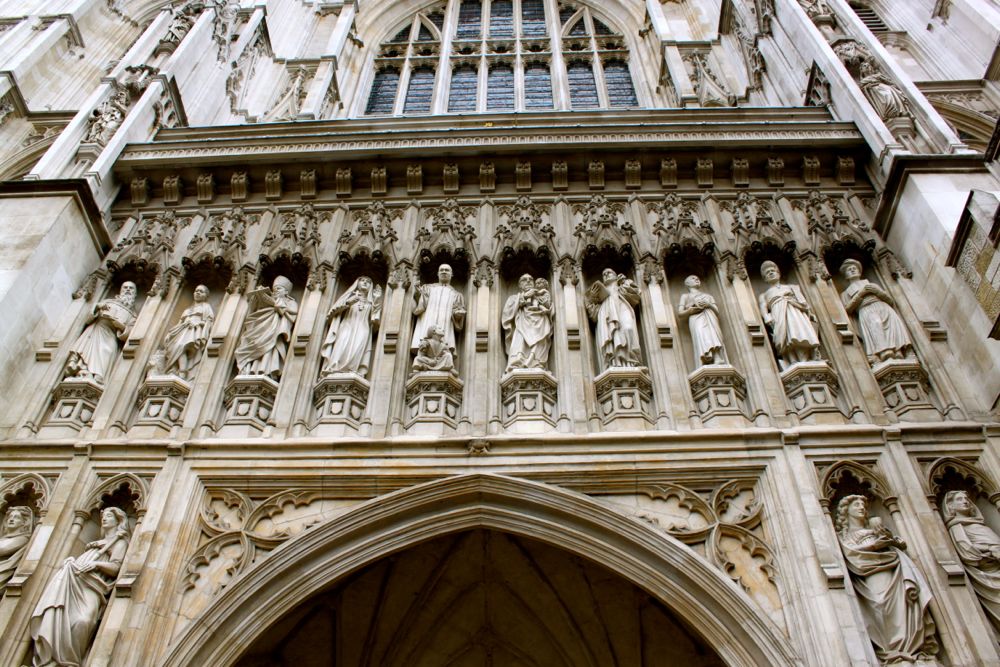 From Westminster, we walked down Whitehall (pausing to laugh at the tourist mobs crowded around the gates of Downing Street) to Trafalgar Square. We grabbed lunch at St. Martin-in-the-Fields (a standard, non-photo worthy affair) and then headed to the National Portrait Gallery. We had originally planned to visit the National Gallery, but the size and scope of the collection seemed overwhelming (I had spent an entire day wandering around the museum on my first London trip), so we opted for the easier to manage Portrait Gallery, which was a very fun backup plan. There, you can see portraits from all of England’s royal families plus various photos of notable modern day Brits. You’ll also see the controversial new painting of Kate Middleton which, strictly speaking, you aren’t allowed to photograph. But I’m pretty sure Kate and I could be BFFs, so I know she would approve of my covert iPhone snap.

After the Portrait Gallery, we headed back to our hotel and rested up a bit before dinner. Once we headed back out, our Tube stop happened to be the gauntlet that is Picadilly Circus, aka London’s version of Times Square. We quickly shuffled past the neon signs – we had somewhere much more exciting to be…

And that place was Nopi, one of Yotam Ottolenghi’s restaurants. I’ve read a lot about Ottolenghi over the past few years, so this dinner was one of my most anticipated moments of the trip. I struggled with a way to describe Nopi’s style of cuisine and then found this article, whose opening paragraph captures it much better than I could. Suffice it to say, I went into the meal hoping for lots of rich, bold flavors – and the dinner delivered.

We chose two items from the “nibbles” section of the menu to begin, a tasty hummus with lavosh crackers and the very delicious roasted spice nuts. 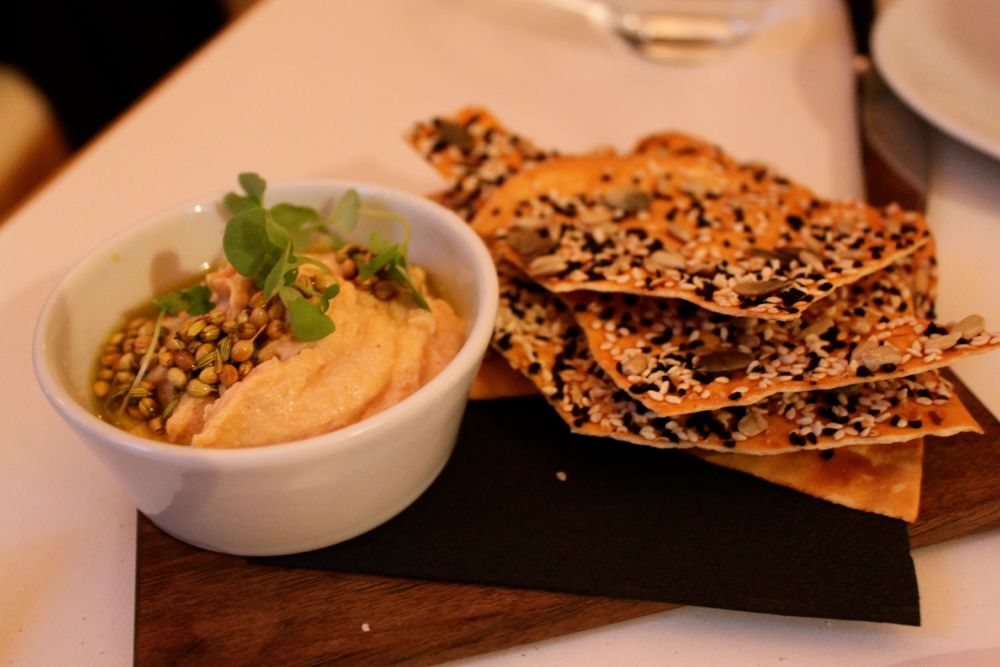 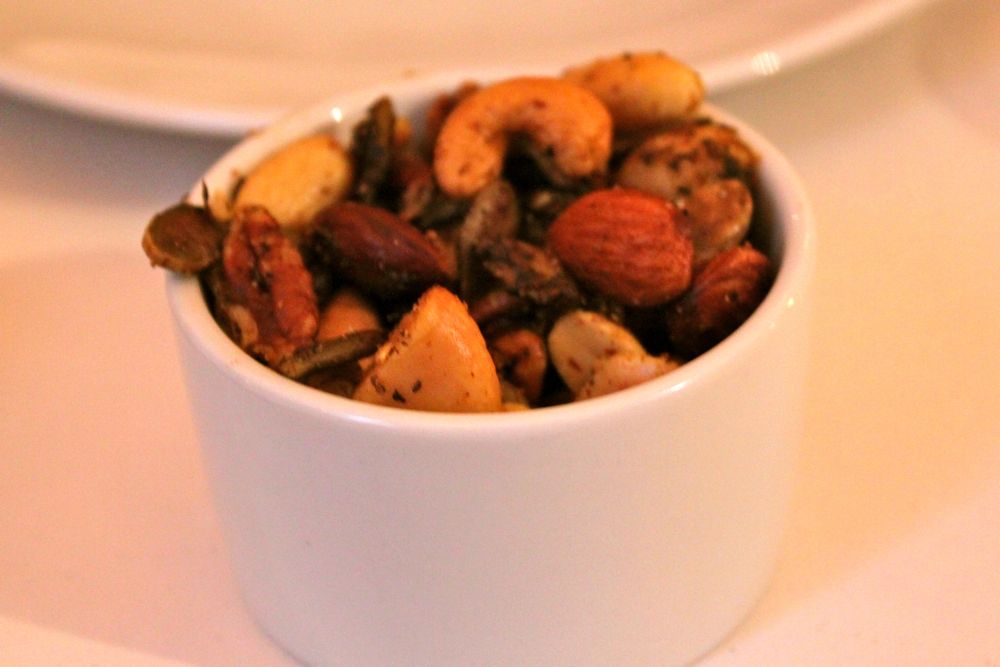 For our main, my mom and I both selected the lemon sole with burnt butter and nori. I thought the fish had just the right amount of lemony-ness (yes, that’s a word) to it and the caper topping was so good (this coming from a girl who does not particularly care for capers). 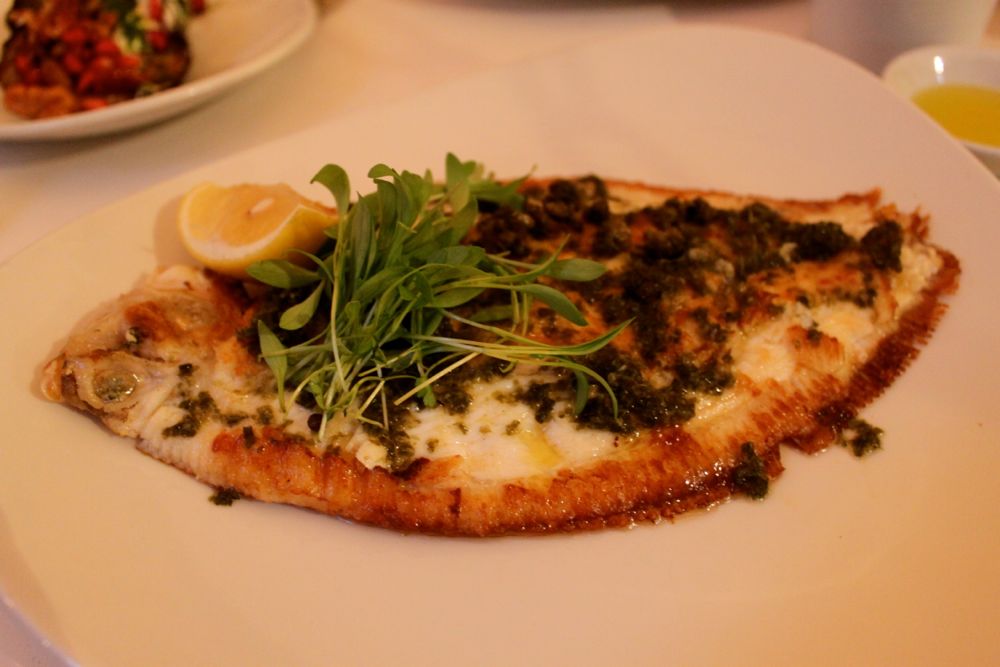 We also got a side of roasted aubergine with walnuts and pomegranate. I’m super bummed that my photo of this dish didn’t turn out great, as it was one of the unexpected highlights of the meal for me; the pomegranate complemented the aubergine really well (in my journal, I wrote that the addition of pomegranate was “inspired,” so clearly I was impressed). A unique and memorable combination!

For dessert (or “pudding,” in the spirit of being British), we chose two items to share. I ordered the coffee pecan financiers with maple cream, while my mom selected a peanut butter ice cream sundae, which came with a little bowl of peanut brittle to top it off. Both were quite good, but in my opinion, it was the savory courses where Nopi really shined. 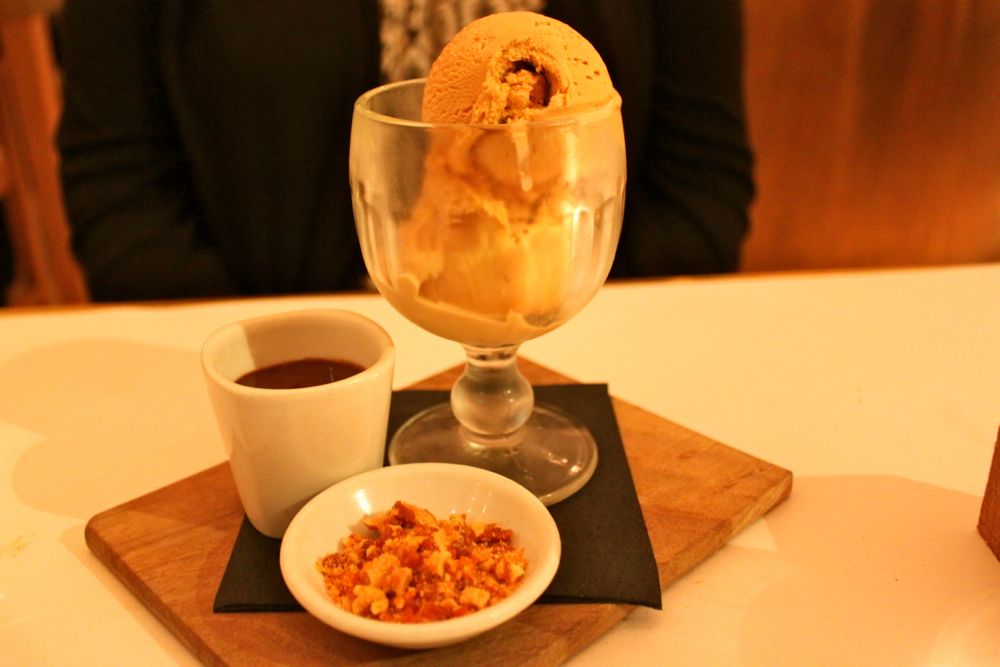 I left the restaurant very full and very satisfied that I had finally experienced a bit of the famed Ottolenghi empire. Now, I just need to plot a return trip to London so I can conquer the other three locations around the city!

6 thoughts on “London, Day 1: The Best Abbey I’ve Ever Seen and the Long-Awaited Nopi Feast”