Before arriving in Budapest, I was not sure what to expect from Hungarian cuisine. I was pretty certain that…they liked goulash? Yes, there was that, but goulash was precisely the extent of my knowledge. I knew there had to be more, though, and so I signed up for a culinary walk with Taste Hungary, where I discovered just how much more there was to love about Hungarian food. From tasty cheeses to delicious wines to sour cream galore, I truly enjoyed exploring the food scene in Budapest – and I left with a few favorites that I’m excited to recreate once I return home.

The tour began at the Central Market Hall, and I set aside some time to explore the place before joining the tour. I have been to many food halls and markets before, but it’s possible that this one takes the honor of being the largest and most overwhelming one I’ve experienced. I loved the place and could have happily wandered from stall to stall for hours.

The tour itself began with a few stops at different stalls in the market, the first of which was an important one: drinks! We sampled Unicum, one of the traditional Hungarian liqueurs. While its plum flavor was nice, the Unicom was also a bit strong (and cough medicine-y) for my tastes. Still, when in Hungary…down your drink. 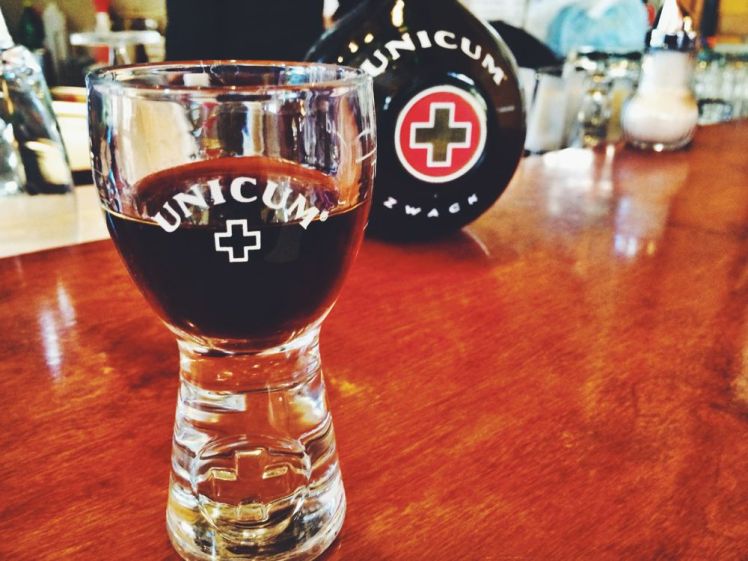 Our next stop was one of the highlights for me: the langos stall. Our guide told us that langos literally means something like “flame-y” in Hungarian, which seems appropriate, as the dough for langos is deep fried. It’s then traditionally topped with cheese, sour cream, and garlic. Our guide pointed out that the stall was also selling langos topped with a lot of other items, like meats and veggies (almost making them resemble pizzas), but that these incarnations were created for tourists. The Hungarian way is to eat it simply, and our langos was so delicious that I could not argue with that philosophy. The dish was also almost obscenely cheesy; though I would have liked to eat my entire portion, I knew there was no way I could do it and still have room for the rest of the tour!

This also seems like an ideal time to mention the Hungarian fascination with sour cream, as langos comes with a generous amount piled atop it – as do many other Hungarian dishes. Our guide explained that “sour cream is to us as olive oil is to Italians,” and I saw repeated evidence of this fact during my time in Hungary. It comes with everything. 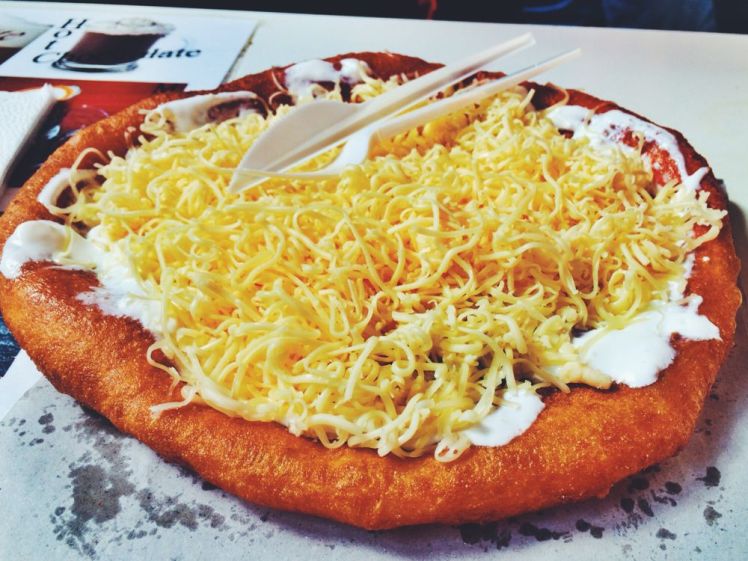 After indulging in one super cheesy dish, we headed to the next stop on our tour, where we sampled…more cheese! Though it was a bit much to visit these two stalls back-to-back, we enjoyed a tasty selection of four cheeses. I didn’t catch the exact names of any of the cheeses, but we tried a cow’s cheese, a sheep’s cheese somewhat akin to smoked mozzarella, a sheep’s cheese aged four months, and a sheep cottage cheese (which was soft and almost ricotta-esque – and my favorite of the bunch). 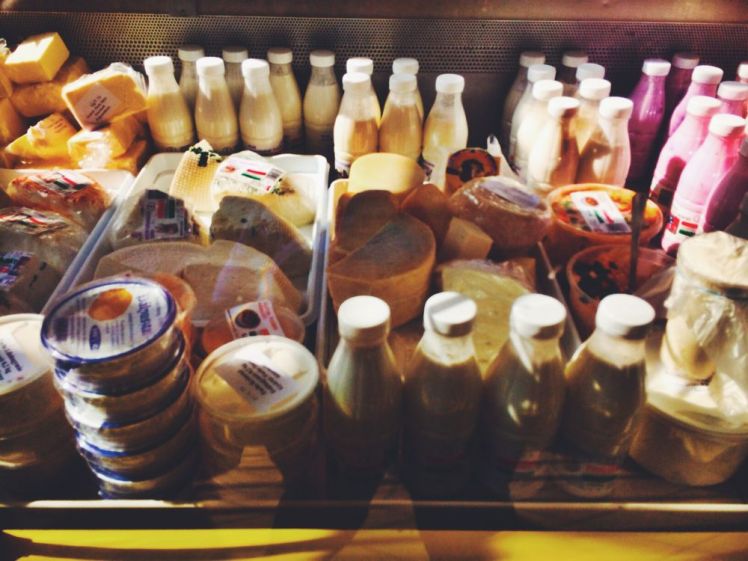 Next, we headed to the basement of the market, where we found stand after stand selling pickled vegetables. It turns out that, in Hungary, they don’t just pickle cucumbers – they pickle every vegetable, plus some fruits for good measure. We tried a whole variety of bites, from straight-up pickles to pickled mini corns, pickled cauliflower, and…pickled watermelon (which doesn’t take like watermelon at all; you just get an intensely sour flavor).

A bag of pickled veggies in hand, we headed back upstairs to our final stop at the market, a deli stand where we sampled a variety of salamis: one regular pork, one spicy pork, one venison, and one…horse. My rule this semester has been to try all local dishes, if only a little bit, and to keep an open mind. So even though the idea of horse meat does not thrill me, I went for it. Overall? Fine. If the guide had not told me it was horse, I never would have suspected it. 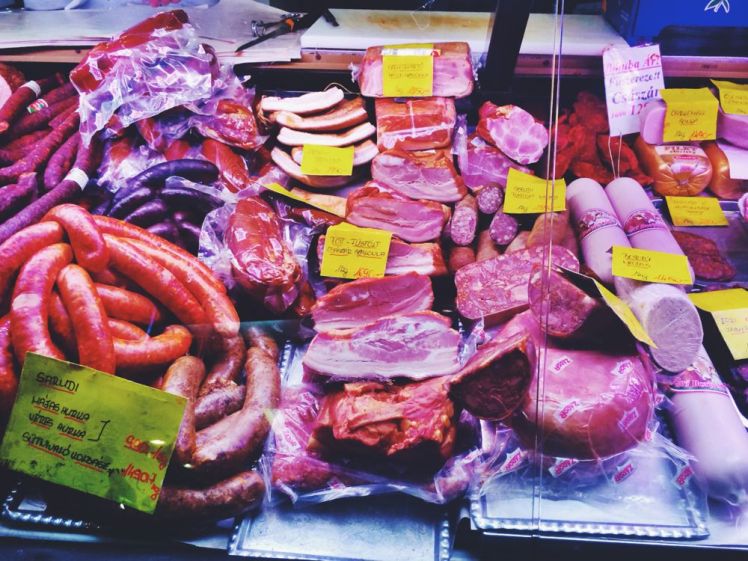 Next, it was time to leave the market and head to lunch (as though we hadn’t already eaten a ton!) We went to Belvárosi Disznótoros for lunch, a spot our guide told us is popular with the locals who work in the area and like to grab a quick lunch there. The restaurant definitely had good food, so its popularity seems well-justified to me.

We started our lunch with a simple mushroom soup. The guide explained that its base consisted of onion, oil, and paprika – which, she said, is the base for pretty much all Hungarian cuisine.

We also sampled a potato pancake, which – along with the langos – was probably my favorite dish of the day. I would not have expected a potato pancake to be particularly flavorful, but this one was. The guide wrote down the recipe for me, so maybe I’ll try my hand at this dish someday.

With our lunch, we also had a simple salad, which tasted really good when piled atop bites of the potato pancake and eaten together.

We topped off lunch with a hearty stew of potato, sausage, onion, and paprika. The guide explained that this strew is a typical “leftover” stew for Hungarians – that is, they whip it up based on whatever they’ve got lying around in their kitchens. 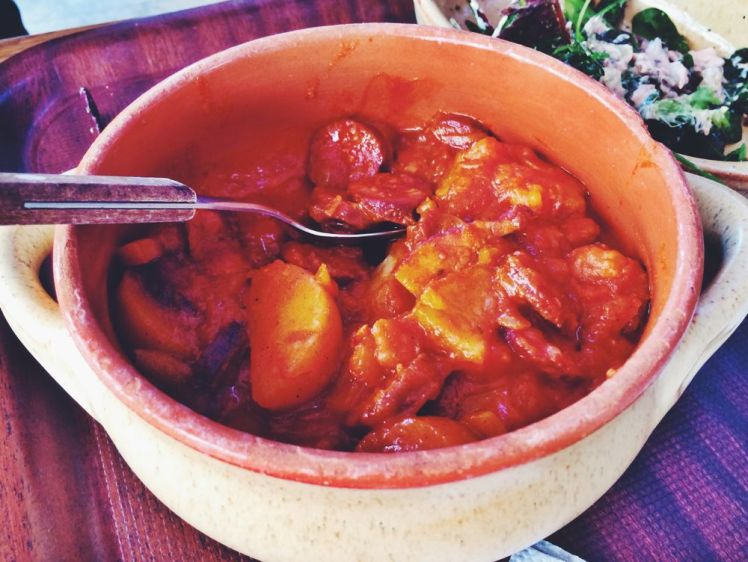 After lunch, we moved on to dessert at Auguszt Cukraszda. This was a really lovely café – it had gorgeous pastries and a huge chandelier, and overall just felt more elegant than your average coffee shop. 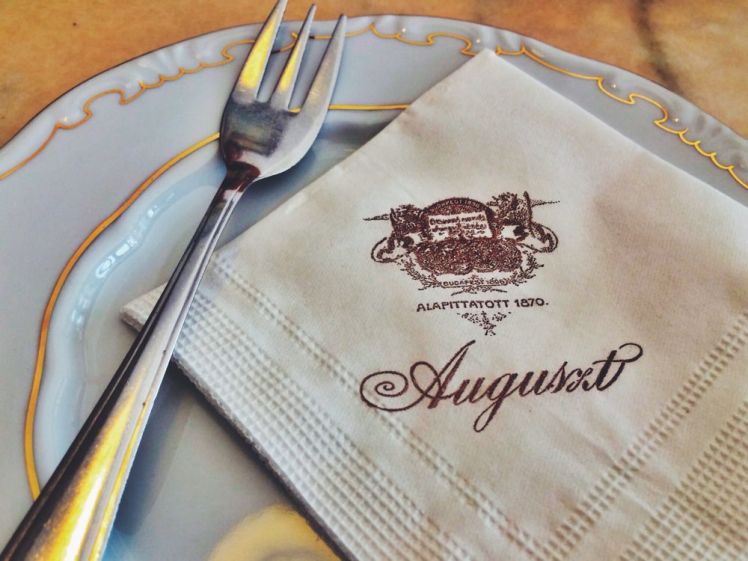 We sampled three cakes. First up, an Esterhazy cake, made with layers of vanilla buttercream and an almond meringue dough. Of all the desserts we tried, this was quite possibly my favorite:

Next, we ate a chocolate sponge cake with a whiskey cream. I’m a chocolate fan but, surprisingly, this was my least favorite dessert. Not that it was bad by any means; sure, the spongy texture was not my favorite, but really, it was just that all the other cakes were that delicious.

Our final cake was the current Birthday Cake of Hungary. Every year, a competition is held for the best cake that’s both creative yet consistent with Hungarian traditions. The recipe for the winning cake is then distributed to bakeries around the country, who whip it up for their customers throughout the year. This year’s winning cake – a honey and walnut confection – was pretty tasty. I also love the idea of having a new national cake each year. America, get on this.

Our final stop of the day was a Hungarian wine tasting at Borbirosag. It was a nice, relaxing way to end our day, as well as the perfect opportunity to learn more about Hungarian wines (a subject on which I knew absolutely nothing). 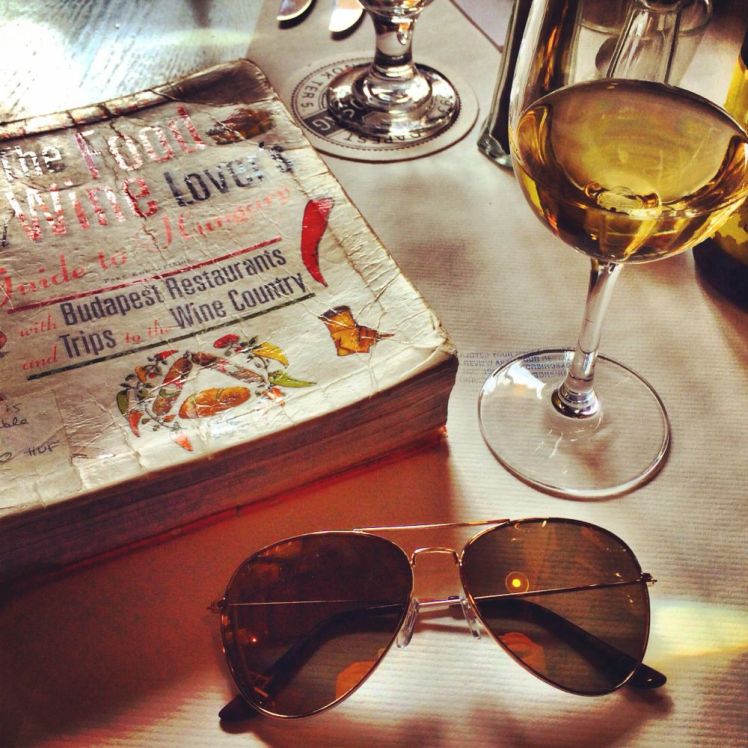 Our first glass was a white wine from the Eytek region of Hungary. Truth be told, I don’t recall much about this particular wine other than that it was “good.” Clearly, I am a regular oenophile.

Our next wine was a red from the Eger region. It tasted sort of standard to me, but it was not too dry – which I appreciate, as that’s generally my problem with reds. 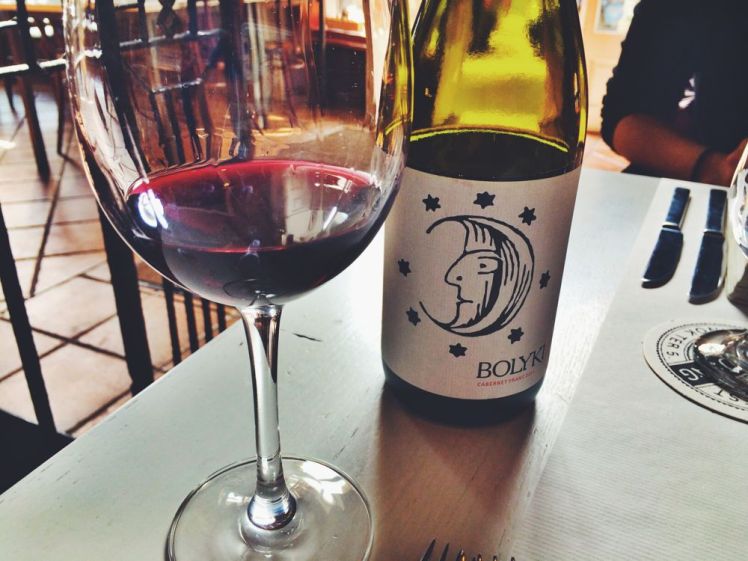 We ended with a white wine from the Tokaj-Hegyalja region (say that five times fast). This was a very sweet dessert wine, meaning it was right up my alley. I would have happily had another glass!

And with that last glass of wine, my adventure with Taste Hungary came to a close. Considering that I began the morning with zero knowledge of Hungarian cuisine, I would call the day a big success, as I left with several new favorite dishes and a clearer sense of the country’s culinary scene. And though I can only imagine that it would be dangerous to live in a country where sour cream comes with everything, it was delicious to indulge in it for one very, very filling – and educational – afternoon.

13 thoughts on “Budapest: What to Eat When You’re Hungry in Hungary”