If you can measure how much I love a particular destination in terms of how many pictures I snapped there, one thing is clear: I really loved Budapest. I’ve already written about my adventures touring the Opera House, learning about Hungarian cuisine, and visiting Castle Hill, but that’s not all I did in Budapest. A quick scroll through my iPhone reveals that I found many, many other things photo-worthy. Here, then, a sample of some of my other highlights in Budapest. 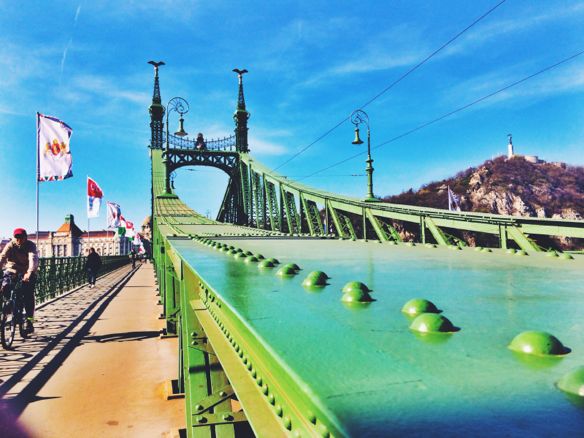 The Danube is one of the prominent features in Budapest, bisecting the city into the Buda and Pest sections. Obviously, then, bridges are a major feature of the city, and I criss-crossed them many times while in town. My favorite was the green-hued Liberty Bridge, just down the street from my hotel (and from the bustling Central Market Hall). I found the Budapest cityscape beautiful, and one of my favorite places to take it all in was from these bridges. 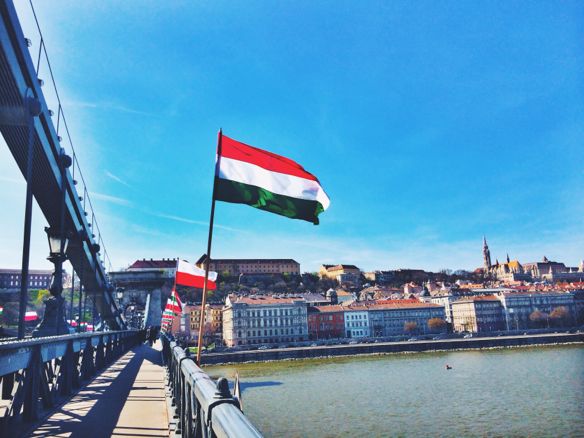 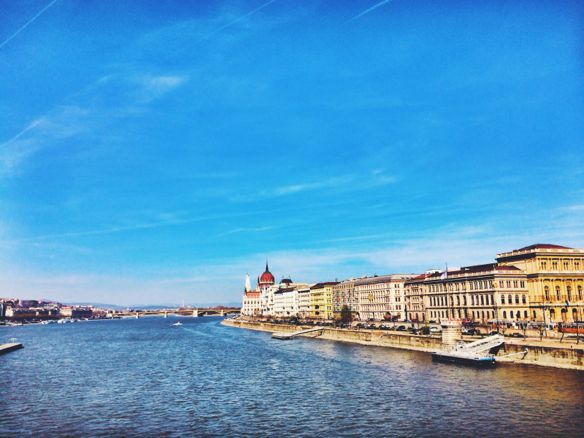 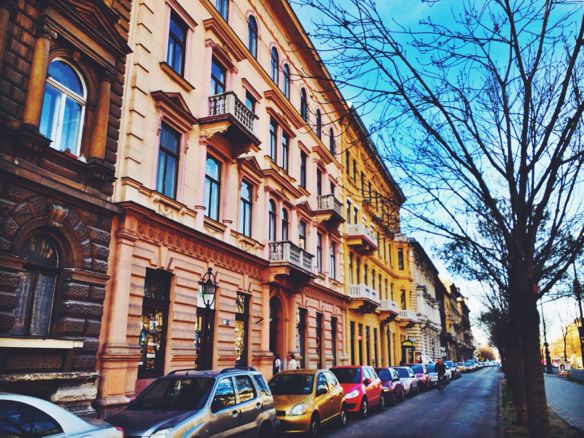 Andrassy Ut is the grand boulevard of Budapest, dotted with beautiful buildings and abundant shopping options (it’s also home to the Opera House). I walked the entire length of the street, pausing frequently to admire the colorful building facades and the gorgeous spring flowers – which had just begun to blossom on the weekend I visited. 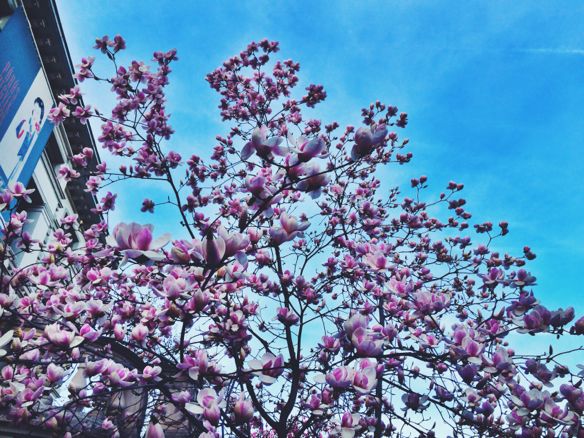 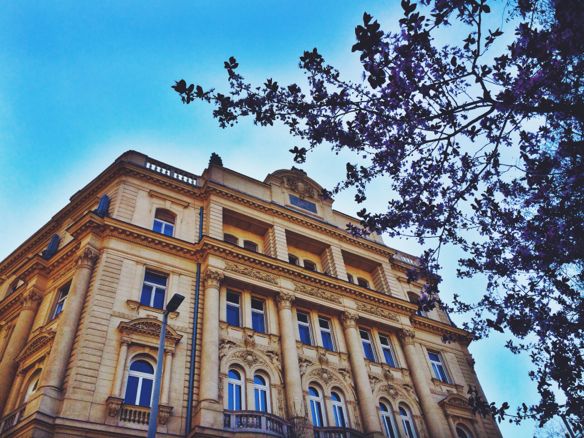 At one end of Andrassy Ut, you’ll find Heroes Square, one of the main squares of the city and home to the Museum of Fine Arts and the Millennium Monument (the structure with all the columns). Another fun fact: Budapest’s underground metro system is the oldest in Europe, and the stop near Heroes’ Square (Hosok Tere) bears this fact out: it’s definitely vintage looking. And by that, I mean: kind of creaky and creepy. 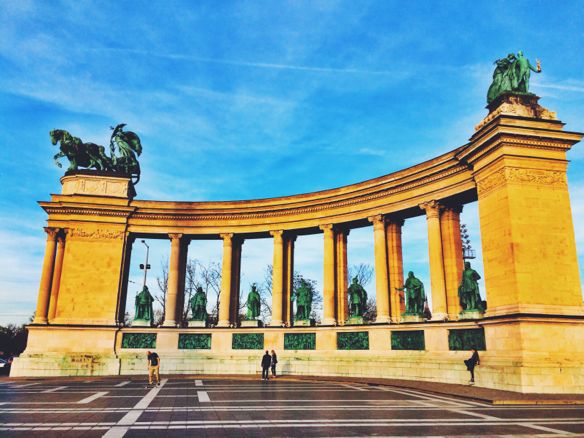 Reflecting at the Holocaust Memorial: 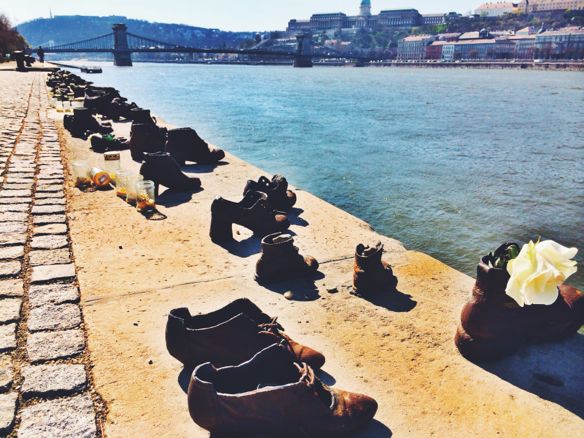 On a somber note, Budapest is also home to one of the more memorable Holocaust memorials I’ve ever seen. During World War II, Jews were lined up along the banks of the Danube, made to remove their shoes, and then shot so that they fell into the river. This monument, with its iron-sculpted shoes, commemorates those events. A fitting and beautiful tribute. 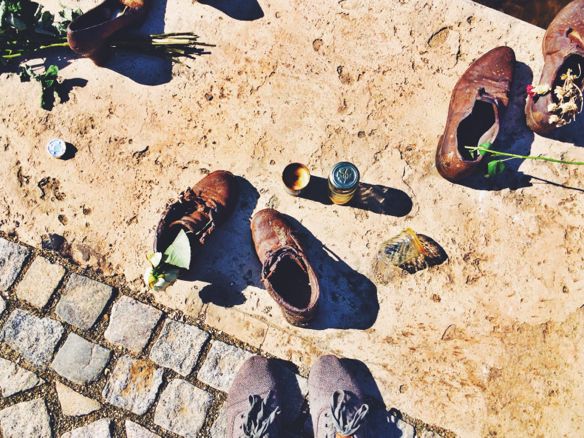 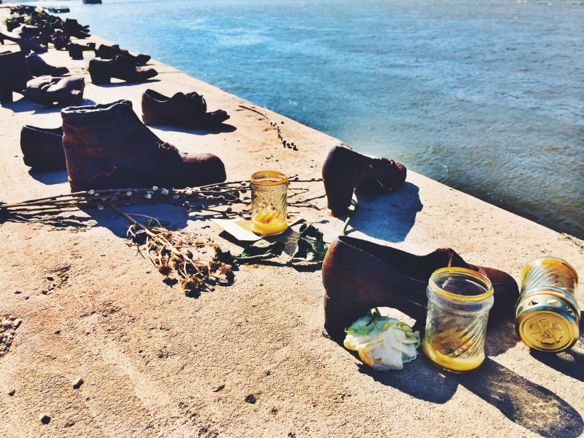 The gigantic St. Stephen’s Basilica was so imposing a structure that I found it difficult to fit the entirety of the building in one photograph! While I didn’t go inside, I still marveled at the church’s grandeur. It also overlooks a nice pedestrian area (Szent Istvan ter) lined with cafes and shops – a good place for a sightseeing coffee break.

In addition to indulging – quite a bit – on my food tour of Budapest, I also hit up a few other dining establishments worth mentioning. At a restaurant near St. Stephen’s (whose name, unfortunately, I did not write down), I tried chicken paprikash. It seemed like a quintessentially Hungarian dish – particularly being topped with sour cream and paprika, two staple ingredients – but I felt more compelled to order it due to its mention in my all-time favorite movie.

On my first day in the city, I was on a mission: acquire new sunglasses. I headed to the H&M on Vorosmarty Square (a bustling pedestrian area lined with shops), where I spotted something else that caught my eye: gelato. After snapping up a pair of cheap sunglasses, I treated myself to a salted caramel gelato and a stroll along the Danube – the perfect end to a day.

On my last day in Budapest, I grabbed lunch at one of the city’s ruin pubs, Koleves Kert. Situated in the Jewish Quarter, this place was a great deal: really tasty food (I loved my free-range chicken), reasonable prices, and tourist-free (except for, you know, myself). Plus, I found the Jewish Quarter to be a worthwhile place to explore and walk off my calories post-meal. 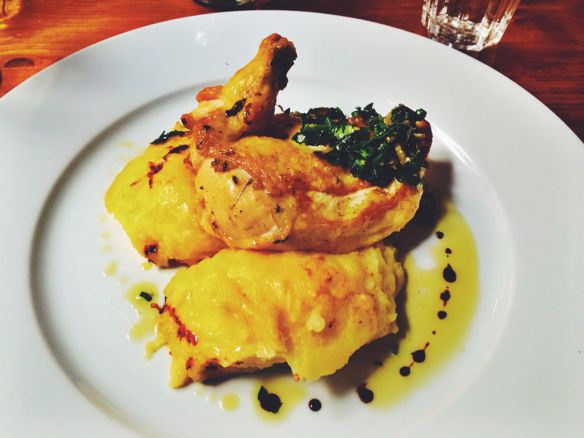 On the recommendation of the guide from my food tour, I stopped by Rozsavolgyi Csokolade, a chocolate shop touting some very…unique flavors. Among those I tried? Chocolate with paprika, chocolate with lavender, and chocolate with palinka (a fruit brandy). While I can’t say I was a big fan of paprika chocolate, I did enjoy the other flavors, particularly the lavender.

Over the course of three days in the city, I went from knowing absolutely nothing about Budapest to falling in love with its charms. Even though, as this post probably shows, I did a ton while in Budapest, it’s a place where I know there’s still more to do. I was grateful for my weekend-long introduction to the Pearl of the Danube, but I have a sneaking suspicion that this is not the end of the story for Budapest and me.