I started to have a recurring though in Paris.

It went something like this: Paris, you are such a drama queen. Because, seriously, the city sort of was during my five days there. I mentioned before that it was rainy during my Parisian jaunt, and this led to one wonderful phenomenon: some seriously striking clouds.

I did not set foot inside Notre Dame, the Eiffel Tower, or Sacré-Coeur on this trip to Paris – been there, done that, and have little desire to fight through tourist throngs to do it again. But I visited each landmark nonetheless, content to simply admire them from the outside, under the blanket of Paris’s striking skies.

My hotel was located about a ten minute walk from the Eiffel Tower, so it became a nightly ritual to take a stroll by the Tower. Every time I did, it seemed like it had just rained; the clouds were always gorgeous and the puddles filled with reflections of the Tower itself. 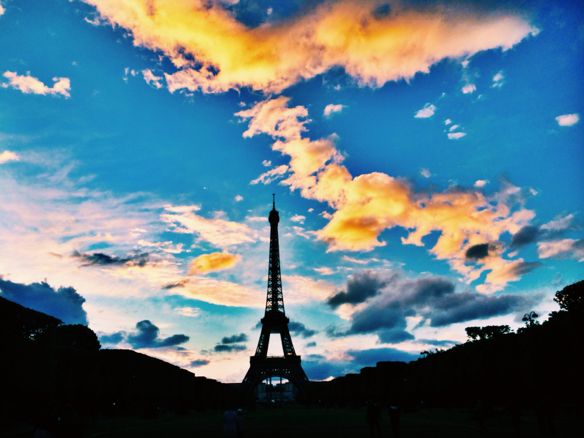 As for Notre Dame, I headed to the Latin Quarter in search of cream puffs at Odette – and, being so close to the cathedral, it seemed a shame not to stop by for a bit. I spent a while wandering around outside, weaving through throngs of tourists in search of the perfect picture. Eventually, I headed over to the “Love Locks” bridge to view Notre Dame from my favorite vantage point: the back. Isn’t it more gorgeous from that side anyway?

And finally, Sacre-Coeur. I know Notre Dame is sort of “the” church that everyone thinks of when they think of Paris, but I’ve got to be honest: I’ve always loved Sacre-Coeur more. Perhaps it’s due to the location: high atop a hill in Montmartre, with a fun, lively atmosphere and gorgeous views of Paris stretching out below.

Whenever I think about these three landmarks, I think of that scene from Sex and the City where Carrie checks into the Plaza Athénée, walks out onto the balcony, and shrieks upon catching a glimpse of the Eiffel Tower down the road. I don’t care if they’re super touristy, I don’t care if they’re overhyped: these sites will always be oh-so-Paris to me, and I doubt I will ever lose my enthusiasm for revisiting them. And, though they’re plenty grand on their own, set against the backdrop of some seriously stunning skies, they become even more spectacular, don’t you think?