One annoying thing about all the travel I did this semester was the planning: coordinating flights, hotels, food, and sightseeing took a lot of time and effort. Often, I would try to crank out a bunch of trips all at once, going on a spree, for instance, of booking hotels. This meant that, by the time I actually arrived in each destination, I had pretty much forgotten why I had once chosen that particular hotel. Location? Price? Amenities? Who knew. Those details had long ago blended together in a blurry, jumbled travel-planning vortex.

That was not necessarily a bad thing, however. In fact, it happens to be why I had one of my favorite moments of the semester in Copenhagen.

On the plane from Brussels to Copenhagen, I thumbed through a guidebook, taking special note of Nyhavn Harbor. The harbor certainly has plenty of history, dating back to the 17th-century, but I was interested in it for another reason: it looked really, really beautiful. Like, insanely so. With its ships set against a backdrop of brightly colored buildings all in a row, Nyhavn could not have appeared more picturesque. I made a mental note to check it out as soon as possible.

I headed toward my hotel in Copenhagen, rolling my suitcase down the cobblestones behind me, iPhone map firmly in hand. One right turn, I realized, and I would be on the street where the hotel was located. So I turned right, and there it was:

As it turned out, I had booked a hotel right on the harbor. I hadn’t even realized it until that moment (or perhaps I had realized it, months before, but I had long forgotten about it by that point). It felt like an incredible stroke of luck: I get to wake up here every morning and come back here every night? Really? Well alright. If you insist.

I loved having the harbor as my home base in Copenhagen, as it was an easy walk to the subway, to Strøget (Copenhagen’s long, bustling pedestrian street), and to the Little Mermaid statue. It was also just a pleasant place to be, not to mention a super pleasant place to photograph. Rather inadvertently, I had wound up right where I wanted to be. 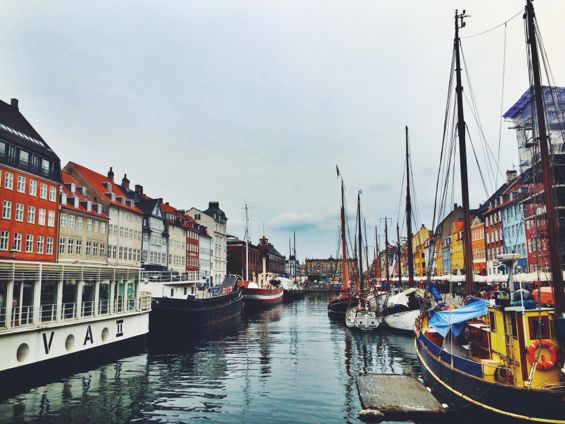 On my last night in Copenhagen – which also happened to be my last night of my entire semester abroad – I was in my hotel room, packing. I had put off packing for as long as humanly possible (as I tend to do), and I had to be up early in the morning to catch the first of the three flights it would take to get me back home. I peeked out my window to catch a glimpse of the harbor, as I had grown accustomed to doing during my stay in Copenhagen. I saw this:

My jaw dropped. The sky was the most amazing, vibrant shade of orange I had ever seen. I abandoned my packing immediately, throwing on my shoes and coat and heading out for one last stroll through lovely Nyhavn Harbor. That night, I wound up going to bed way later than I had planned, of course. But you know what?

3 thoughts on “Copenhagen: A Delightful Homebase in Nyhavn Harbor”