Copenhagen, to me, is not the flashiest of destinations. It’s been on my list of places to visit for quite a long while, yet if pressed to say why exactly, I think I might have drawn a blank. Before this trip, I’m not sure I even knew what to expect in the city. I was vaguely aware that the Little Mermaid statue was a thing, and I think I had seen Tivoli Gardens on an old episode of The Amazing Race. And the city itself did indeed turn out to be pretty low-key: it doesn’t have the swoon-worthy charm of Paris, or the permeating feeling of “I’m literally walking atop history” of Rome, or the hustle and bustle of London. It’s simply not an ostentatious, attention-grabbing sort of place.

And yet, as I scrolled through my camera roll, it occurred to me just how much I truly loved the city, how fully I savored my days there. I did so many wonderful things in Copenhagen, and the city did charm me, albeit in a reserved, Scandinavian sort of way. In my book, it’s an underrated European gem, filled with beautiful places to see and interesting things to do. I’ve already written about several of them (Nyhavn Harbor, Tivoli Gardens, my Danish food tour, and the city’s three palaces), but here’s the rest of what I did in Copenhagen.

The heart of Copenhagen is the Strøget, a pedestrian walkway that connects the Nyhavn Harbor area with the Tivoli Gardens area. I walked up and down this street countless times (okay, probably more like ten times) during my stay, and there was always something to see, whether it was poking my head into a cathedral, veering down a colorful side street, or popping into a shop to browse. 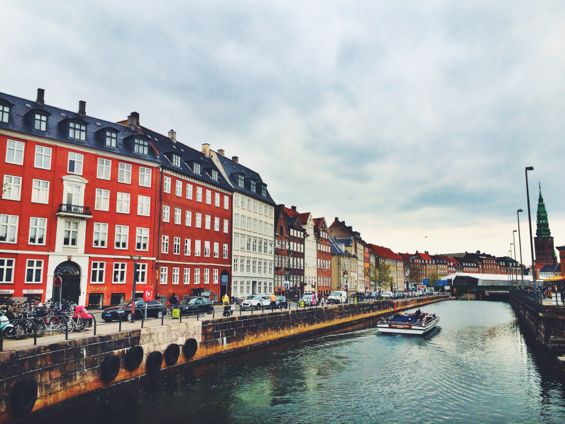 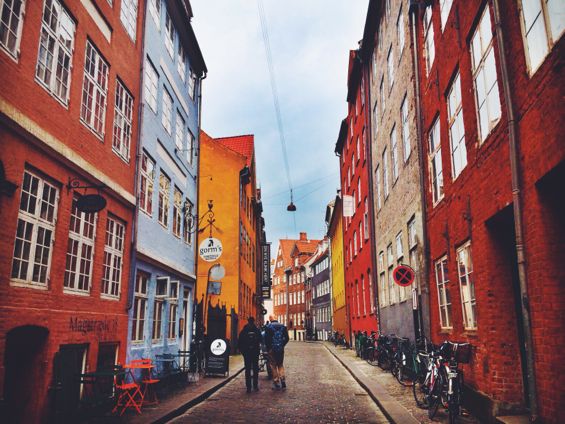 Equally famous in Copenhagen – though perhaps less deservedly so – is the Little Mermaid statue. Hans Christian Andersen lived in Copenhagen from age 14, calling Nyhavn Harbor home and giving rise to the need for a statue to commemorate one of his most celebrated tales. As for the statue itself, I’ll be lazy and borrow the analogy I used to describe Brussels’s Manneken Pis – it’s a full-on Mona Lisa, meaning it’s tiny, mildly disappointing, and absolutely mobbed by tourists. The only difference is that, in the case of the Little Mermaid, said tourists have to climb over a fairly precarious set of rocks if they want a picture next to the statue, giving rise to some humorous-to-watch stumbling around. Not that I am the sort of person who would chuckle at seeing tourists clinging to slippery rocks for dear life while forcing a smile for the camera. I mean, obviously.

More exciting than the statue itself is the walk to the statue from Amalienborg Palace. Lovely gardens, statues, a church, and a waterfall dot the pathway, and I enjoyed seeing them even more than good old Ariel. 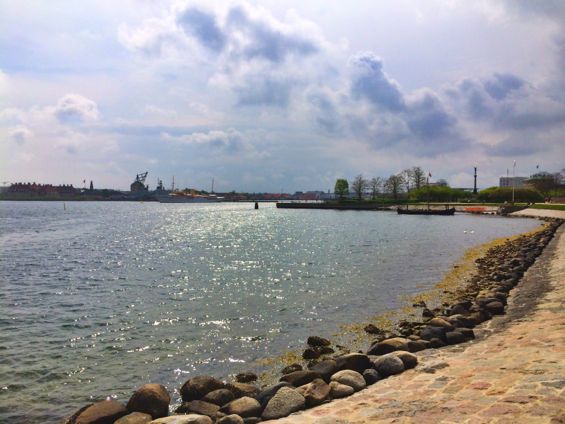 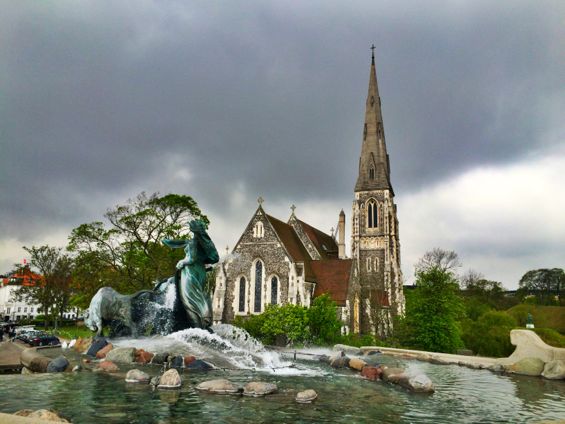 The Little Mermaid statue is also visible, albeit from afar, via the boat cruises that depart from Nyhavn Harbor. I jumped on one such cruise, which offered a picturesque circuit through Copenhagen’s harbor and major canals. The only problem? I went on a cold, windy morning – and the boat ride was basically pure misery. I was freezing (seriously, seriously freezing – this cannot be overstated), so my recommendation would be to ONLY go on a bright sunshine-y day, when I’m certain it would be a perfectly lovely experience. If it’s cold or rainy or windy, I would give the cruise a hard pass. 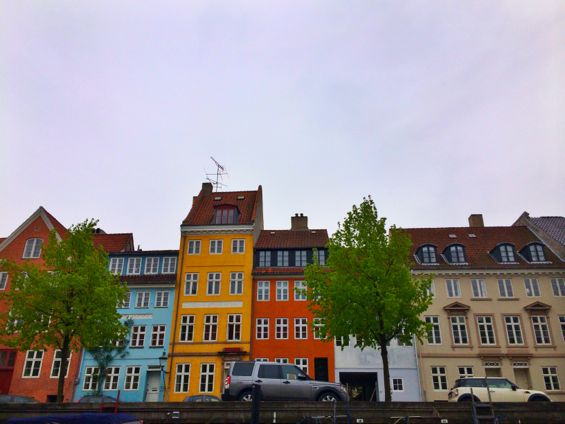 After my shiver-inducing boat tour, I needed a spot to warm up, and luckily, Copenhagen has plenty of good places to do just that. The first of these was Conditori La Glace, a cake and coffee shop located just off Strøget. When I arrived, there was a line out the door – a perfectly normal occurrence, as the spot is quite popular and, as I soon learned, with good reason. However, I didn’t need to worry about waiting too long; the staff at La Glace knows what they are doing, and the line moves quickly.

Once inside, I sat down at my table and perused the extensive and overwhelming menu. I selected the Stjernekræs cake (made with hazelnut, almond praline, and apricot) and a cappuccino, stepping up to the bar to place my order as is the procedure here. The cake was fabulously decadent and the cappuccino did just the trick on a cold day, even though I was a bit incredulous at being bundled up in my thickest scarf and wrapping my hands around a hot coffee cup for warmth in freaking May. 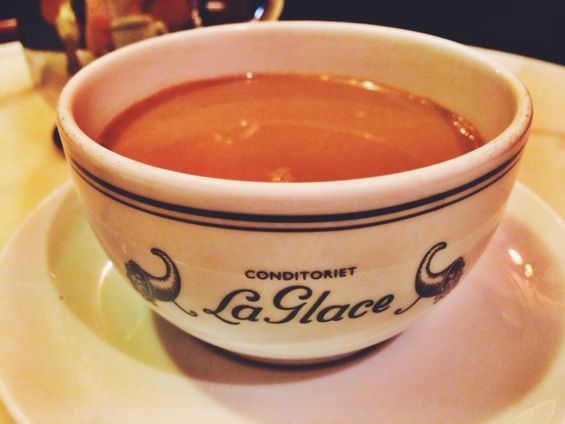 Another lovely place I sought refuge from Copenhagen’s chilly, rainy weather was Perch’s Thehandel. While Perch’s offers a full-on, fancy afternoon tea (and lord knows I love a good afternoon tea), I opted for just a pot of tea and a few scones rather than all that food, this time around. The scones here were excellent and I thoroughly enjoyed cozying up in Perch’s tea room with a good book for a few hours. 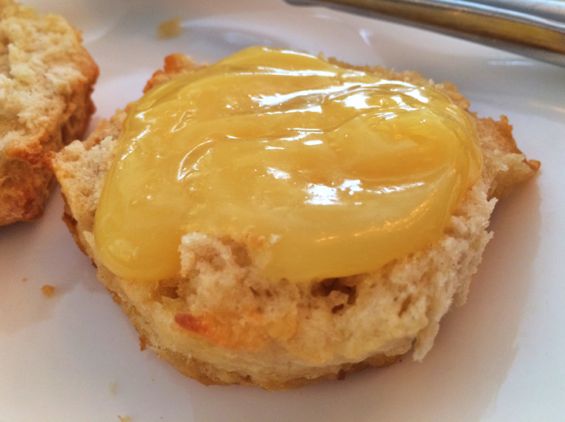 When it came to actual meals, I opted to do things on the cheaper side in Copenhagen, cobbling together my own cheese, bread, and fruit picnics or buying a hot dog from one of the many carts around the city. Yet one restaurant that I did hit and that is worth mentioning is Riz Raz, a vegetarian buffet. What I liked about Riz Raz was that it didn’t leave me with the gross, overstuffed feeling that many buffets do – the food was on the lighter side, and everything felt quite fresh and relatively healthy.

Another cheap-ish option for food was the cafeteria at Magasin du Nord department store. Here, I scored an inexpensive (by Copenhagen standards) but gigantic sandwich. 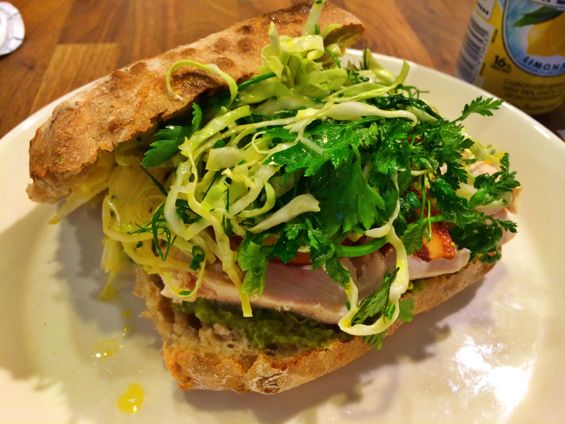 Adjacent to the food vendors at Magasin du Nord, I found an extensive chocolate section, and it was super fun to just browse the selection. Isn’t this packaging clever?

While I didn’t do much shopping at Magasin du Nord, I did do a bit of browsing at other shops around the city. I love the Scandinavian design aesthetic, and I found many shops boasting housewares that I was absolutely dying to purchase but regrettably could not (damn you, grad student budget). Still, even looking was fun. 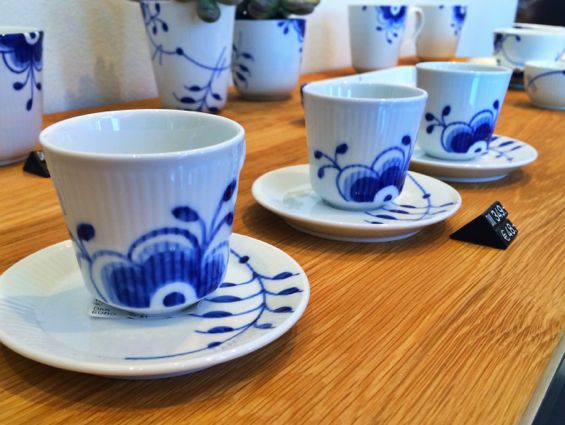 Also fun was the carnival-like atmosphere permeating Copenhagen during my stay there. I hadn’t realized it until I arrived, but the city was hosting the Eurovision song competition during my five days there. While I was initially wary that this would mean unbearable crowds, this didn’t turn out to be the case at all. There were impromptu parades (complete with confetti throwing) and live music all over the city, but it never felt disorderly or overwhelming – it was just carefully controlled Danish merriment, and I was happy to be part of it. 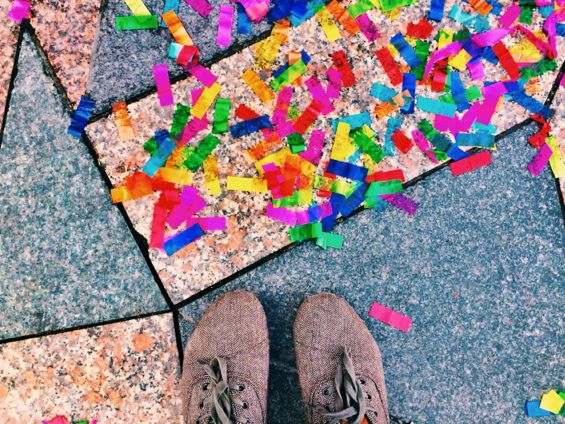 My semester abroad ended in Copenhagen, and now that I think about it, this turned out to be the perfect place. The city was quiet enough that, after four months of traveling, I didn’t feel exhausted by the pace of the city. Yet it was also wonderful enough that I left Europe on a true high note, happy to have had five days of Danish delights in lovely Copenhagen.

8 thoughts on “Copenhagen: Low-Key but Lovely”