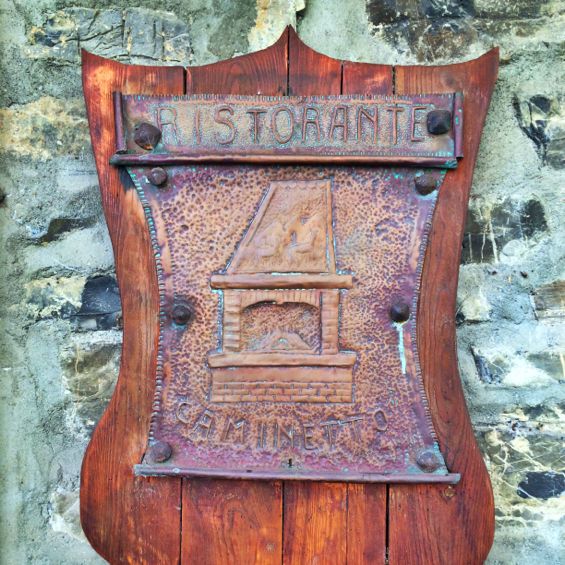 Hidden in the hills above Varenna lies a cozy culinary gem: Ristorante Il Caminetto. And the best thing about this foodie paradise? You can learn its secrets.

Il Caminetto offers cooking classes, and after hearing from multiple sources that they were top-notch, I signed up. On the day of class, I made my way to Varenna’s Piazza San Giorgio, where Rosella and Moreno, the husband and wife team behind Il Caminetto, pick all their students up. After piling into our chariot (er, van), we made the drive: up, up, and up a series of tiny, winding roads with lots of switchbacks. It was one part treacherous and approximately one million parts gorgeous – though, of course, a drive I would never dare make on my own.

The restaurant is situated in the quaint, quintessentially Italian village of Perledo. While there wasn’t much time to explore beyond the sleepy street Il Caminetto called home, I liked what I saw: flower-covered balconies, ivy-covered walls, and a cute little nonna who chatted with us in Italian from her balcony. 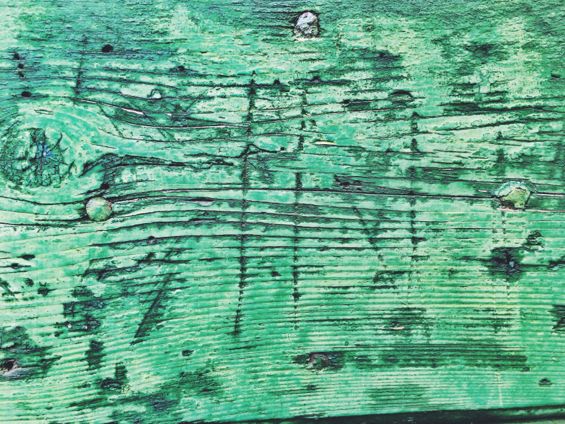 Once inside the restaurant, we were seated around long tables, facing toward a table at the front of the room topped with a gigantic cutting board; from this spot, Moreno would conduct his masterclass. Listening to him speak was not only informative but also supremely entertaining, as he had an excellent sense of humor, much of it cooking-related. “I have a lot of knives,” Moreno told us, “I’ve been a cook for 39 years, and after all this time, knives are like shoes for girls.”

Over the course of the morning, Moreno walked us through making three dishes: tortelloni with tomato sauce, risotto with porcini mushrooms, and veal. We started with the tortelloni and, of course, the noodles were made from scratch. We watched as Moreno employed the classic Italian method: dumping out a pile of flour and creating a crater in the middle, filling it with eggs, whipping them with his fingers, and then kneading the dough by hand. 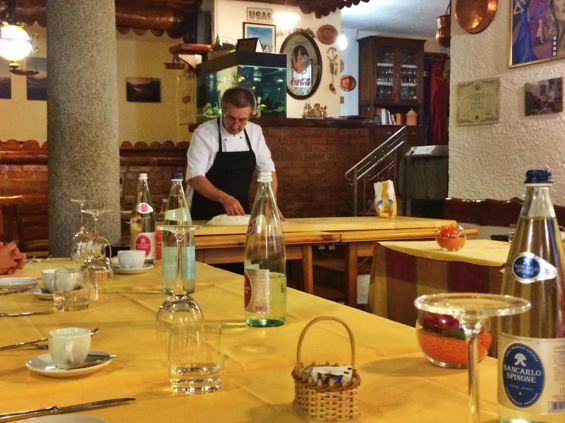 While the dough rested, we started on the veal loin. Moreno salted it, placed chunks of lard atop it (to keep the moisture in), topped it with Parma ham, and then tied it up with twine. He placed the veal atop vegetables and drizzled it with EVOO from the Lake Como region. It was a beautiful piece of meat. And, I mean, anything wrapped in prosciutto is basically a guaranteed winner, right? 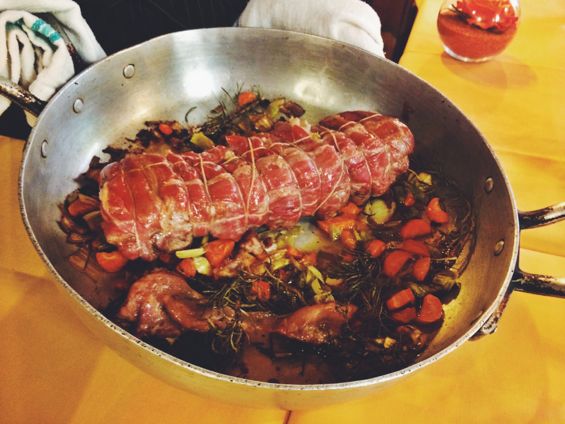 Next, we tackled the filling for our tortelloni. Moreno scraped garlic on the inside of a bowl, then stirred in fresh ricotta; the moisture from the ricotta absorbs the garlic flavor. Then he added herbs: lemon verbena (the leaf pictured below), marjoram, chives, basil, lemon mint, sea salt, and black pepper. Moreno emphasized that he chops all his herbs by hand – if you use a food processor, you lose the freshness of the herbs. He finished by adding an “Italian pinch” – also known as an enormous handful – of parmigiano to the mixture.

With our filling ready, we set to making the tomato sauce for our tortelloni. To the pan, Moreno added crushed garlic, EVOO, Sicilian cherry tomatoes, and tomato passata (purée). After beginning to stir, he added pepper (make sure to hold the grinder diagonally, not straight up, so that steam from the sauce doesn’t get into the grinder), a bit of sugar, and basil.

Once the sauce was simmering, it was time to assemble the tortelloni. Moreno tested the dough to make sure it was ready: if you push into it and it does not spring back, then you know your dough is workable. Moreno flattened the dough with his hands at first, then with a rolling pin, working it until the dough was insanely thin. He used parchment paper to pipe the filling into the tortelloni and, while folding them up, made sure to squeeze out any extra air. 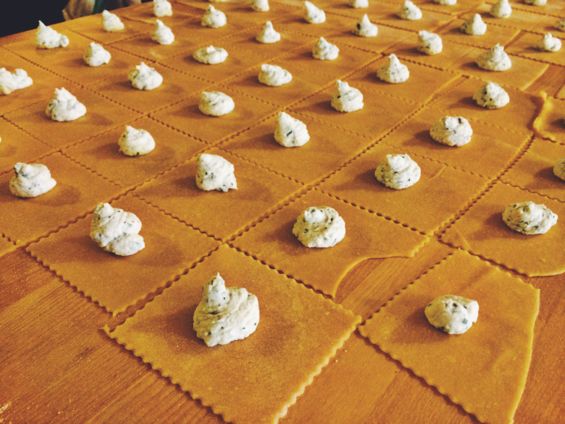 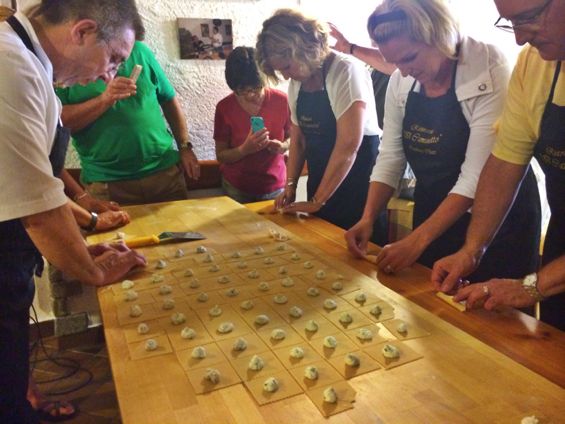 Our final step was to make the risotto. Moreno told us that we should only use vegetable or beef broth; chicken-flavored broth would be too overpowering for the porcini mushroom flavor you want to come through. He began cooking the rice, then added wine, broth, and mushrooms, and then cooked it all for 18-19 minutes. Then, he added BUTTER. And I place the word in all caps to indicate both the sheer amount that was added and how overwhelmingly delicious the butter made the dish. Oh lord, was it delicious. I love butter.

As a reward for our labor, we received a feast. We started with a red wine from north of Como; like all Italian reds, it was eminently drinkable and, happily, did not give me a headache, despite the generous quantities consumed. We also each received snack boards: cheese, salami, and some to-die-for prosciutto (and, spoiler alert, to-die-for prosciutto became one of the recurring themes of my month in Italy).

As for the meal itself? What can I say except: it was perfection. The tortelloni was delicious, and I even adored the chunks of tomatoes (I’m not a tomato fan, but I make an except for super fresh Sicilian cherry tomatoes, apparently). The veal was flavorful, tender, and all-in-all incredible (in my iPhone notes for the day, I literally wrote, GAHHHH). And the risotto was rich, gooey nirvana. Ah, butter. 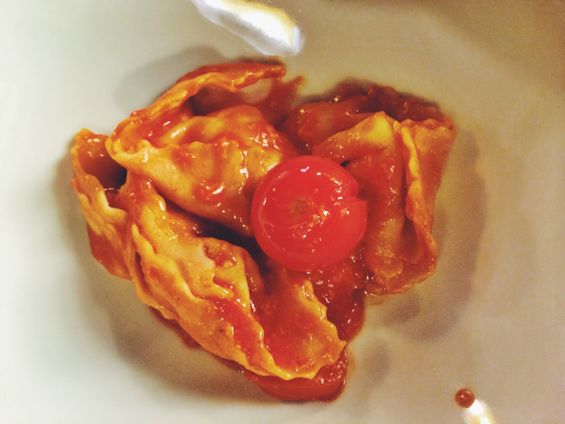 We finished our meal with limoncello – but of course – and then Moreno handed out certificates to each of us, which I found an adorable parting touch.

The day ended with a drive back down the twisty roads toward Varenna, each of us full to bursting from one of the best meals I have ever eaten, which is not a proclamation I make lightly in Italy! If you ever find yourself in Varenna, I highly recommend signing up for a lesson at Il Caminetto – it is an experience you won’t soon forget.

One thought on “Varenna: Culinary Secrets at Il Caminetto”