For the past year or so, there has been one constant with just about every place I have traveled: I take a food tour. There are many reasons why I love a good food tour, but the main one is that they always, always lead me to places I never would have found on my own: the hidden away restaurant serving petiscos (Portuguese tapas) in Lisbon, the amazing organic hot dog stand among a sea of other, lesser hot dog stands in Copenhagen, the restaurant tucked into a courtyard with unexpectedly wonderful cheesecake in Berlin, the relaxed wine bar where locals grab a drink after work in Edinburgh…and on, and on, and on.

Oslo was no different, and my four hours spent with Oslo Food Tours led me to all sorts of gems I would not have otherwise found. Case in point: the tour began in Olaf Ryes Plass in Oslo’s Grünerløkka neighborhood – a beautiful area, but not in the heart of the tourist zone – and the first place we walked to was Mathallen (literally, “food hall”), an awesome culinary emporium that was tucked away in a quirky neighborhood I never would have found on my own. 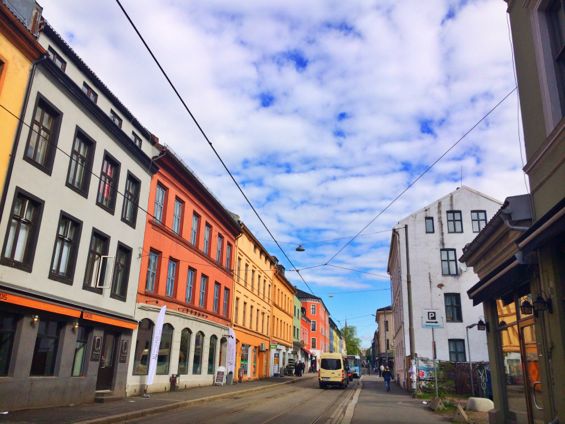 Mathallen is relatively new on Oslo’s culinary scene, having opened about two-and-a-half years ago. Our guide explained that it has been a bit slow to catch on with the locals. Eating out is – like just about everything in Norway – expensive, and most folks eat at home to keep down costs. Luckily, the food hall concept seems to be catching on: it wasn’t crazy busy when I visited (once on the tour, and once again later on my own), but the atmosphere was vibrant, bustling, and fun. 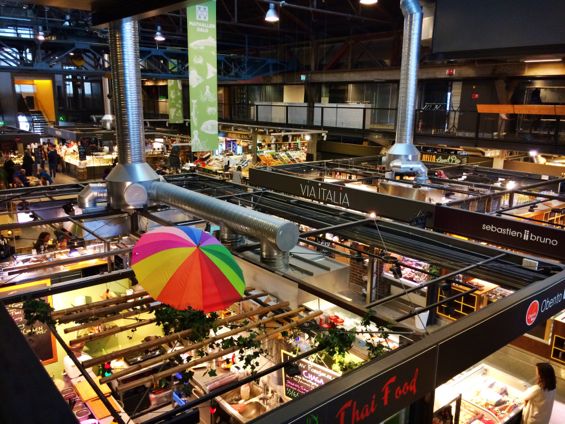 At Mathallen, we sampled food from three different shops. First up, Den Blinde Ku, a cheese shop whose name is translated as “the blind cow” (the owner was given a blind cow for her birthday one year, began making cheese, and – voila! – a business was born). Our guide explained that Norwegians have never been cheese connoisseurs but, recently, they have been growing more adventurous with their cheese. We tried three varieties of cheese that exemplified this: a blue cheese, a gouda with juniper, and a brie. The clear winner for everyone in our group was the gouda with juniper; it had a crunchy, salty texture to it that was so on point.

From Bondens Butikk Vulkan, we tried some Norwegian farmers market goodies: a super sweet raspberry juice and crackers with honey. I loved these thin, crunchy crackers – something about them seemed terribly Scandinavian to me. The honey was excellent, too.

At Melkerampa, purveyors of delicious dairy products, we tried two more memorable cheeses. First, a Jarlsberg aged five years – this was good, but quite strong. Second, the crown jewel – a Norwegian brown cheese, brunost, which is a caramelized whey cheese. In fact, I did not even realize it was cheese at first – it really does look like chocolate! – and its taste was a little trippy. It’s cheese, but it’s sweet and caramel-y? What’s that about?!? Ultimately, though, this was good, if a little disconcerting.

From Mathallen, we embarked upon a non-food related experience that wound up being one of the highlights of the day for me. We left the food market and headed toward the river where, near the art school, the buildings and streets have been turned into street art masterpieces. I loved the bright murals and quirky décor, and the entire area gave me strong Berlin vibes – a very, very good thing.

We then headed to Youngstorget, a lively square with a food market on it. We didn’t browse through those stalls on our tour, but I came back later in the day on my own (more on that in a later post). Nearby Youngstorget, we found Wurst, which serves hot dogs and beer. This was yet another example of a place I never would have found on my own: not only was it tucked down an alleyway, but there was also a series of chalkboards with arrows on them guiding us to the place (and past some other seriously cool looking bars and restaurants).

At Wurst, we drank an amber ale with our two varieties of sausages. We ate a lamb sausage with a mint chutney dipping sauce and a pork with honey mustard. Both were super tasty!

From Wurst, we began our journey back toward the tourist heart of the city, where we stopped into Steen & Strøm, a department store with a fancy food hall in the basement. There, we tried goodies from the Oslo branches of two gourmet dessert shops I was familiar with from my time in Copenhagen.

First up was Lakrids, where we ate all the licorice. We received five flavors of licorice to taste: white chocolate, mint, chili, Belgian chocolate, and a traditional salty one. The three sweet varieties were delightful, but the other two were more…challenging, shall we say. The salty one was not great, but it was manageable. The chili one, however, made me feel slightly nauseous. I bet licorice lovers would be in heaven here, but for those who aren’t fans of the stuff, my recommendation is to stick to the sweet kinds only! 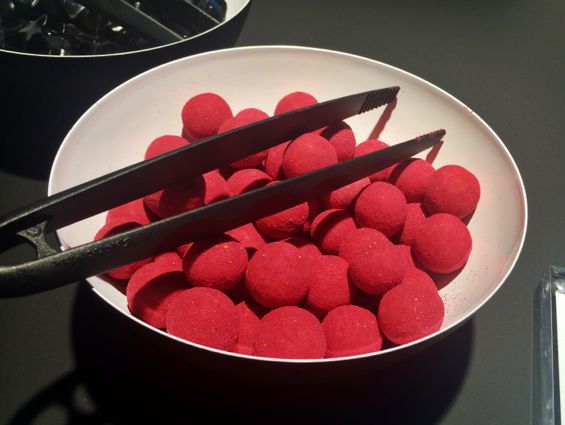 From Steen & Strøm we continued on to Oslo’s fortress, which overlooks the harbor and provides great views. Then we walked down into the harbor itself, where our guide told us that “all the restaurants here are tourist traps…except the one I’m taking you to.”

Ironically enough, the one she took us to was Rorbua, a restaurant where I had eaten lunch the day before. I didn’t mind the repeat, however, as we ate something pretty special there: a platter of various meats and seafoods, some of them pretty daring.

This was a feast: crab, trout, dried codfish, smoked whale, reindeer heart and tongue, moose sausage, caviar, potato salad, and lingonberries. My favorites here were the raw trout (super fresh and perfect) and the whale (which I did not expect to love). The one item I really struggled with, though, was the reindeer tongue: it looked like a tongue, and I had a tough time getting past that.

Our final stop of the day was Amundsen, a restaurant near City Hall where we had a flight of beers. We tried three: a pale ale with citrus, Amundsen’s own Oceans IPA, and the delightfully named Biggie Smalls, an American brown ale. I will say what I always say when confronted with beer: it’s not my favorite, but these were three interesting varieties. 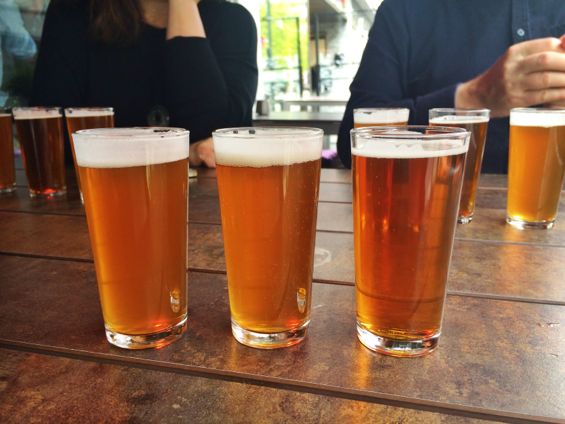 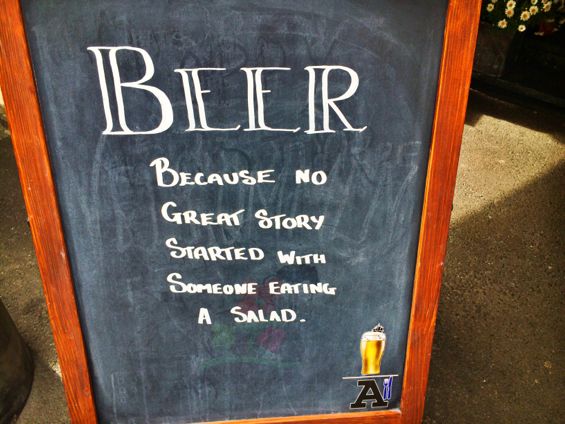 As the tour ended, we were all full to bursting, but I didn’t feel too bad about it: the food was great and we had covered a ton of ground on foot, so I’m sure none of the calories even counted (sure!). All the walking, in particular, made this tour memorable: I loved how much of Oslo we saw, from off-the-beaten-path places to fun discoveries within the tourist heart of the city. I felt not just that I had gotten to know Oslo’s cuisine, but also the city itself – and I loved both what I saw and what I tasted.