It’s impossible to write a post about “November in Paris” without acknowledging the attacks that occurred last month. Honestly, it feels a bit silly to write frivolous blog entries about the city at a time like this, but in another sense, it also seems sort of perfect: most Parisians seem determined to get back to “normal,” and in Paris, “normal” involves a hearty appreciation for food and drink. In fact, the week following the attacks, restaurants and restaurant-goers tweeted and Instagrammed #JeSuisEnTerrace (“I am out on the terrace”) and #TousAuBistrot (“everybody to the bistro”), unified in their determination to show that the French joie de vivre lived on. Indeed, every time I walk by a restaurant or café whose outdoor tables are filled with Parisians, I have to smile at the resilience of this city: tossed but not sunk, rattled but not willing to stop living, and still the best at celebrating the pleasures of life. In that spirit, then, a look back at where I wined and dined in Paris this November.

The month began with dinner at La Bourse et La Vie, which is by now an old familiar favorite: I dined there twice in September, and I’m sure I’ll be back again before I leave this month. I had the ever reliable steak frites for my main, and they were as wonderful as always. For a starter, I tried the mackerel which was good but very, VERY fishy. I mean, I love fish but this was…quite something. Nonetheless, it did not diminish my love for this restaurant, which is as strong as ever.

In search of something a bit different, I headed to Café Smörgås for breakfast one Saturday morning. Because, you know, who doesn’t want a good Swedish breakfast while in Paris? I loved the very Scandinavian brown bread, and overall it was a nice change of pace from the ever-present croissant. The café is attached to an awesome Scandinavian home goods store (La Trésorerie) that was super fun to browse…and which I left wanting to buy one of everything.

In other “am I really eating this meal in Paris??” news, I popped into The Beast for some barbeque. My brisket, mac & cheese, and biscuit were all excellent, and it was nice to have a taste of home (never mind the fact that I rarely eat barbeque at home…something about it just feels so wonderfully American and homey to me).

Given that I’m a fan of a good afternoon tea, I knew I had to try at least one while in Paris. I opted for Le Meurice, where I met up with a friend one Saturday afternoon. Under the ornate ceiling of Restaurant Le Dalí, we enjoyed some of the best savories I’ve ever had at a tea (none of the sandwiches were duds, which is so, so rare) and indulged in an incredible amount of sweets. They also came around with trays of fresh-from-the-oven madeleines, a fun and très Parisian touch.

I loved taking a food tour through the Marais last year, so this year, I signed up for one on the other side of the river. I plan to write about my Taste of the Left Bank tour in more detail later, but for now, suffice it to say that I found my new favorite cheese shop, ever, and tasted some seriously good chocolates and wine.

While the food was good at Terroir Parisien (particularly the Paris Brest I had for dessert), the service was not great. I generally think stereotypes of the French as rude and haughty are way, way off the mark, but every now and then you run into a person who absolutely embodies those notions, and that was our waiter here. When we couldn’t order things in flawless French, he got very uppity – a shame, since the restaurant was otherwise good. 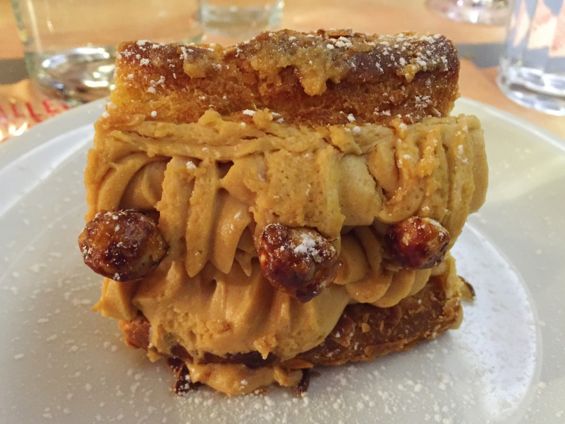 In November, I saved the best for last: the tasting menu at Pottoka, which at 60 euros is one the best values I’ve found here. Each of the five courses were incredible and beautifully presented. I loved the langoustine tempura, which came with a mixture of very colorful and flavorful veggies. The dessert was also amazing: exotic fruits topped with all sorts of meringues. I genuinely loved every bite of this meal. The service here was also fabulous and friendly; our waiter made us smile every time he popped by with a new course.

And with that, I bid November farewell. Since I’m behind on everything at the moment, I write this post as we’re already a week deep into December and – spoiler alert – it’s gonna be a good one for Parisian fine dining. Bon appétit!