This is my favorite post to write each year, without a doubt. No matter what ups and downs occurred during the year, somehow looking back on it at the end makes everything seem pretty okay. I’ve forgotten the day-to-day annoyances and bigger problems, and all I see now are the highlights: the travel, the times with friends and family, the amazing meals, and the new discoveries. 2015 was, without doubt, a good one.

January: Visited the Central Park Zoo with my best friends on New Year’s Day. Toured the Brooklyn Brewery in Williamsburg. Saw Cabaret on Broadway. Met Patrick J. Adams at the Suits: Behind the Lens exhibit. Brunched at the Tipsy Parson and wandered around Chelsea in the rain. Survived the non-blizzard of 2015. Took winter walks through Prospect Park and Central Park. Turned 29. Ate breakfast pizza at Shelter, a hipster-friendly spot in Williamsburg. 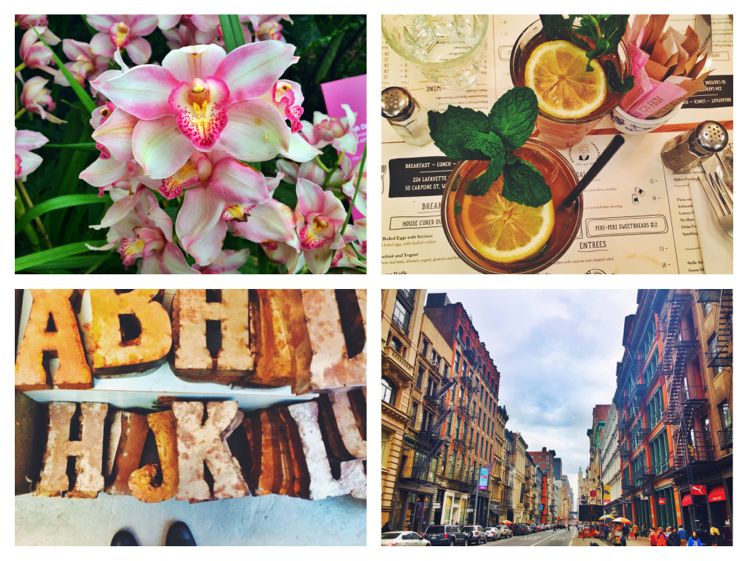 March: Browsed the treasures of the Brooklyn Flea. Watched a tennis exhibition (Federer v. Dimitrov) at Madison Square Garden. Ogled the flowers at New York Botanical Garden’s Orchid Show. Had Pimm’s Cups at Jack’s Wife Freda and then wandered through a sunny Soho. Danced the night away at Bedlam in Alphabet City. Struggled with the never-ending winter weather. Brunched at Sunshine Co. in Brooklyn, The Smith on the Upper West Side, and Narcissa in the East Village. Booked a trip to Norway and Finland!

April: Walked the High Line with law school friends. Admired the Macy’s windows, decked out in florals for spring. Brunched at Piquant in Brooklyn on Easter Sunday (and followed up our brunch with more bottomless mimosas at Woodland). Admired Central Park in full bloom. Won tickets to a Yankees game. Saw The Audience, Beautiful, and Phantom of the Opera on Broadway. Went to the Radio City Spring Spectacular with my family. Got sworn in to the New York bar! Ate amazing food at Smorgasburg – twice. Took a pizza tour in Cobble Hill. Had the seven-course pasta tasting at Babbo.

May: Cruised through the fjords in Norway. Explored Bergen’s colorful harbor and adorable back streets. Ate reindeer tongue, wandered through sculpture gardens, admired the funky street art, and saw “The Scream” in Oslo. Had a memorable lunch at a Michelin-starred restaurant, toured the cathedrals, sampled Finnish tapas, and fell in love with Finnish design aesthetics in Helsinki. Participated in a surprise mountaintop proposal in Atlanta with some of my best friends. Saw – and adored – An American in Paris on Broadway. Brunched at Buvette, Rubirosa, and Collichio & Sons.

June: Saw The Tempest at Shakespeare in the Park, listened to the music with friends at Philharmonic in the Park, and watched Ingrid Michaelson perform at SummerStage. Admired the costumes at China: Through the Looking Glass at the Met. Trekked to the Bronx with a friend to view the Frida Kahlo exhibit at NYBG. Puzzled over the bizarre Yoko Ono exhibit at MoMA. Saw Amy Schumer and friends do stand-up on the Trainwreck comedy tour. Went to the Village to watch the Pride Parade. Saw Les Mis on Broadway. Brunched with my sister at Estela (and followed it up with speculoos ice cream at Davey’s). Sampled the cereal milk ice cream at Momofuku Milk Bar.

July: Explored Quebec City’s upper town and lower towns, had an elegant tea at the Frontenac, and marveled at Montmorency Falls over the Fourth of July weekend. Flew home for a family reunion. Watched the Women’s Soccer Team dominate Japan in the World Cup final at a bar in midtown. Got ca-razy busy at work. Made scones and Pimm’s Cups for Breakfast at Wimbledon. Booked a trip to Argentina for the fall! Went on many summer lunches at work. Saw Les Mis on Broadway. 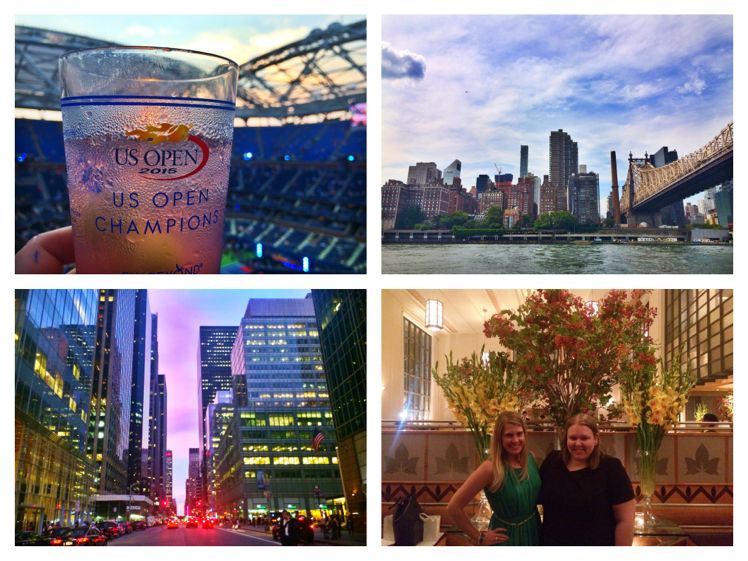 August: Splurged on an epic dinner at Eleven Madison Park. Visited the Mad Men exhibit at the Museum of the Moving Image in Queens. Rode the tram from Roosevelt Island into Manhattan. Cooled off with salty caramel ice cream in a red velvet cone at Sprinkles. Grabbed drinks at Surf Bar in Williamsburg then went to Hip Hop Karaoke at Brooklyn Bowl. Attended a taping of Late Night with Seth Meyers. Visited NYBG to see the Frida Kahlo exhibit again, followed by a trip to Little Italy in the Bronx. Saw Serena and Rafa play at the US Open’s opening night. Said goodbye to my sister as she moved from NYC to LA. 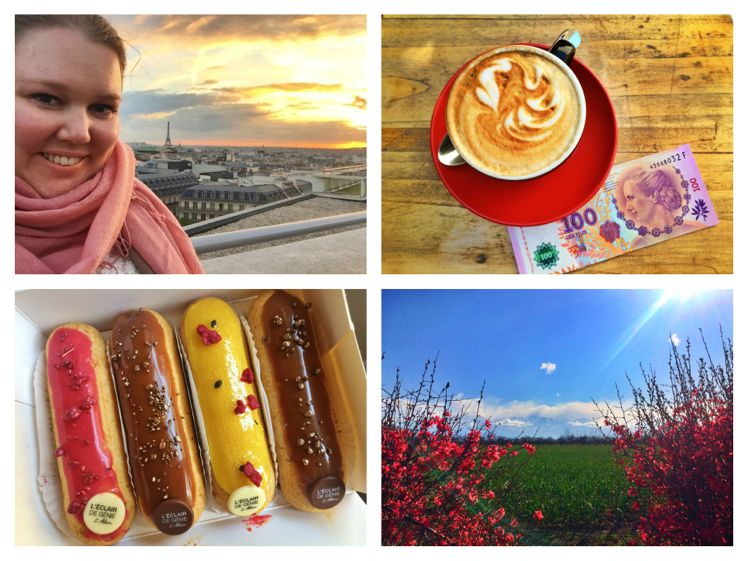 October: Took two weekend trips to London. Shopped at Portobello Road Market, had a high fashion afternoon tea, explored East London, saw Bend It Like Beckham on the West End, and admired the windows at Selfridges. Day tripped to Reims and had champagne at Veuve and Taittinger. Spent a lovely autumn afternoon in the Luxembourg Gardens. Visited Versailles and admired its autumn splendor. Toured the chateaux at Vaux le Vicomte and Fontainbleau. Had awesome dinners at Au Passage and Spring and a lovely brunch at Angelina.

November: Had afternoon tea at Le Meurice. Ate delicious cheese, chocolate, and choux pastry on my Left Bank food tour. Spent a weekend in Dublin, admiring the Christmas decorations, wandering through St. Stephen’s Green, and eating lots of good meals. Tried (and loved) the tasting menu at Pottoka. Flew back to the US for Thanksgiving. Saw Phantom of the Opera in New York. Visited Los Angeles (and California!) for the first time ever. Brunched at Gjelina, walked around Santa Monica Pier at sunset, and admired the Christmas lights on Rodeo Drive. Hopped on a flight back to Paris. 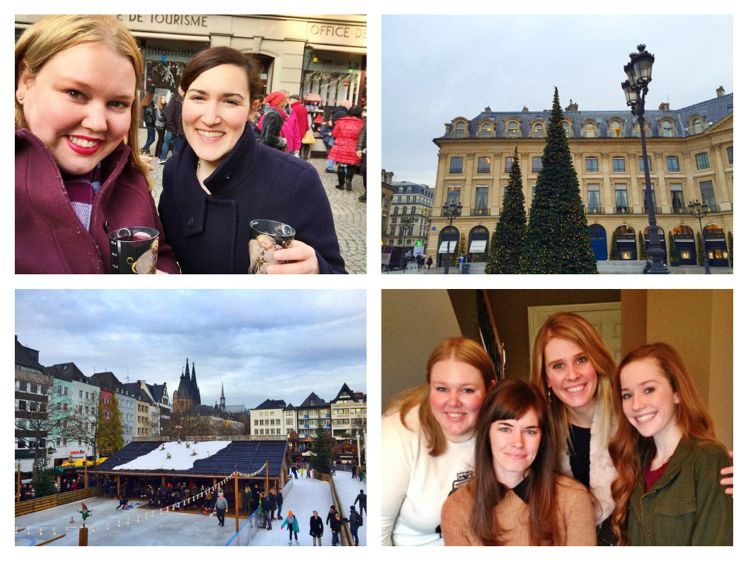 December: Fell in love with Paris at Christmas. Had phenomenal tasting menus at Dersou, Verjus, and Sola. Spent a weekend in Strasbourg, geeking out over the Christmas markets. Explored the seven Christmas markets of Cologne. Bought a million ornaments at Le Bon Marché and all the gourmet food at La Grande Épicerie. Ate amazing lunches at Ober Mamma, Tannat, and L’Ami Jean. Revisited the Rodin Museum. Stocked up on chocolate at Patrick Roger and pâte de fruit at Jacques Genin to bring home. Flew to New York for a day, then home to Michigan for the holidays. Had tea at the Townsend Hotel. Rang in the New Year in the mitten state!