When I spent a semester in Geneva back in 2014, I spent most of my time trying to escape Geneva. Sure, I liked Switzerland well enough, but it was never quite as exciting as other places. Budapest! Lisbon! Berlin! They all sound just a wee bit sexier than neutral, efficient, clean Switzerland.

Funny thing, though: for the last few months, I’ve found myself actively missing, of all places, good old Switzerland. The beautiful landscapes? The trains that always, always leave right on the dot? The melt-in-your-mouth, ruin-all-other-chocolates-for-you-for-life chocolate? I wanted all of it, and when I found myself headed to Paris for a two week work stint, I knew exactly what I wanted to do with that middle weekend. To Zurich I went.

I arrived in the middle of a snowstorm, which felt very Swiss to me. The walk from the train station to my hotel was a liiiiiittle bit cold, but man, it sure was pretty: 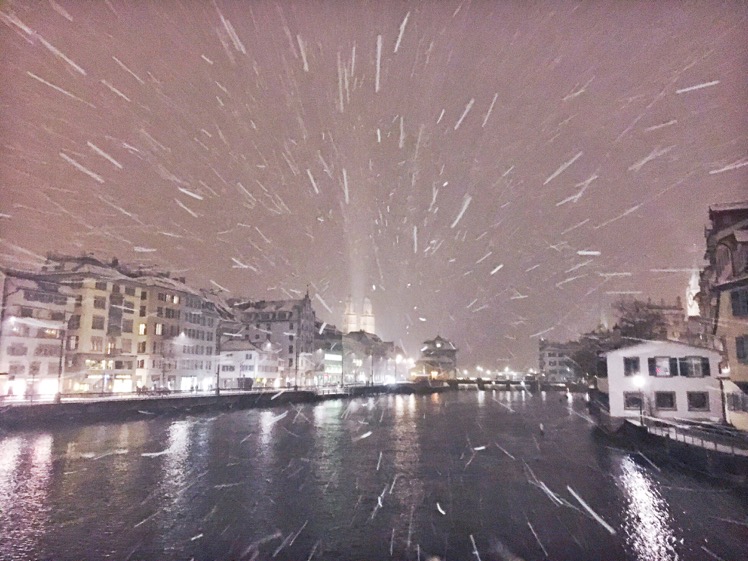 I stayed at Marktgasse, a nice little hipster boutique hotel tucked away in the Old Town. Their restaurant Delish was one of my favorite hangouts that weekend, and I loved picking out my breakfast from their selection of fresh food and baked goodies. I discovered my first morning that their cinnamon roll was basically to die for, and after that it was game over for me, as I had to have one for the next day’s breakfast too. Good thing I did a ton of walking that weekend!

I know I should probably expand my horizons beyond Zurich’s Old Town, but it’s hard when that part of the city is just So. Damn. Charming. Truly, I could poke around in its cobblestone streets forever. 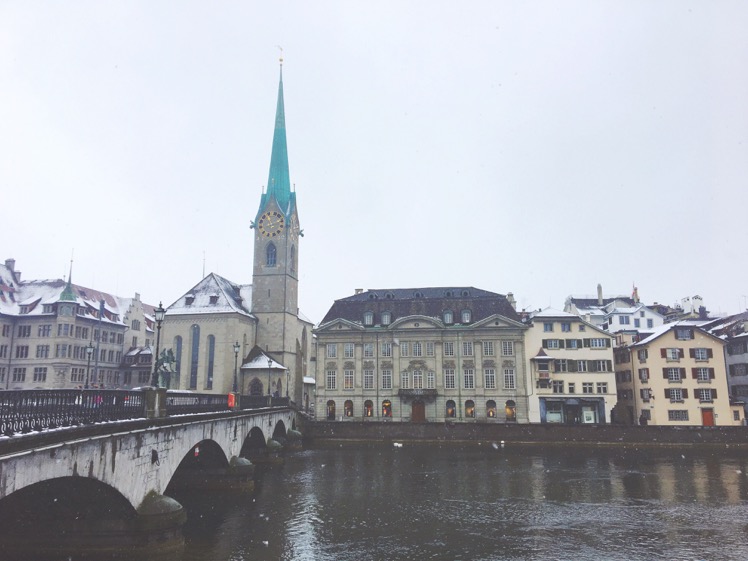 The last time I visited Zurich, it was a bit sunnier and Lake Zurich was sparkling in the sun – which sounds like a cliche but is actually true. This time? It was … a bit different, but still beautiful. 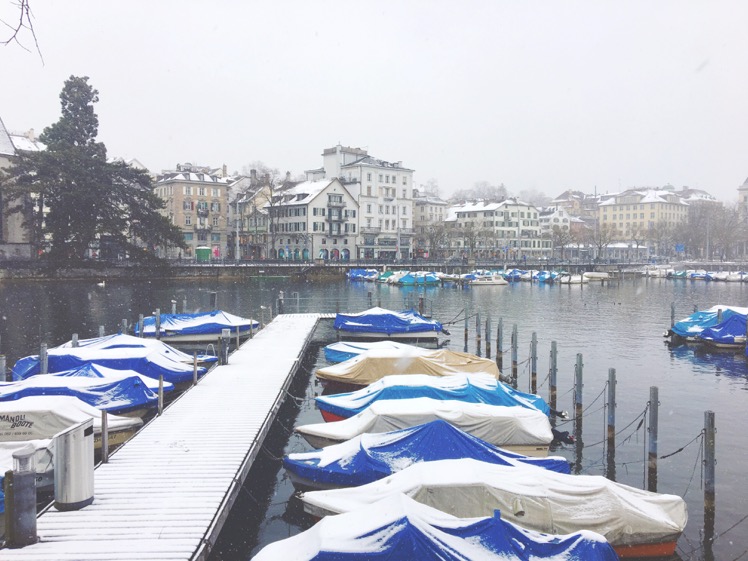 Given that it snowed almost constantly the entire time I was in Zurich, I got pretty good at finding places to periodically pop into to get warm. Sprüngli is a Zurich institution, and their hot chocolate is truly wonderful (my server claimed it was the “best in the world,” but then he would think that, wouldn’t he?) (still, it was pretty damn good). After savoring my hot chocolate, I popped over to Sprüngli’s store to stock up on goodies for friends.

One thing I had forgotten about Switzerland? How freaking expensive it is. I’m talking truly, shockingly, crazily expensive – and I say this as someone who lives in New York City. So while I didn’t do much actual shopping there, I did quite a bit of window shopping. 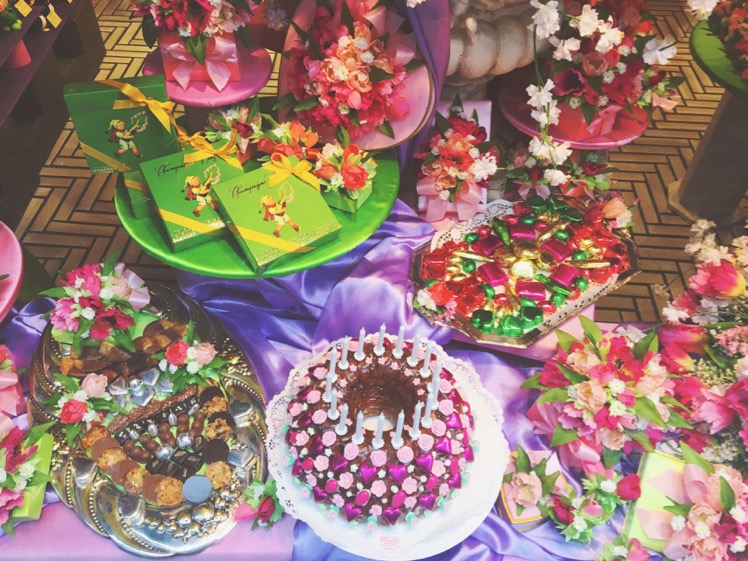 (^Chocolate abounds, and God bless Switzerland for that.) 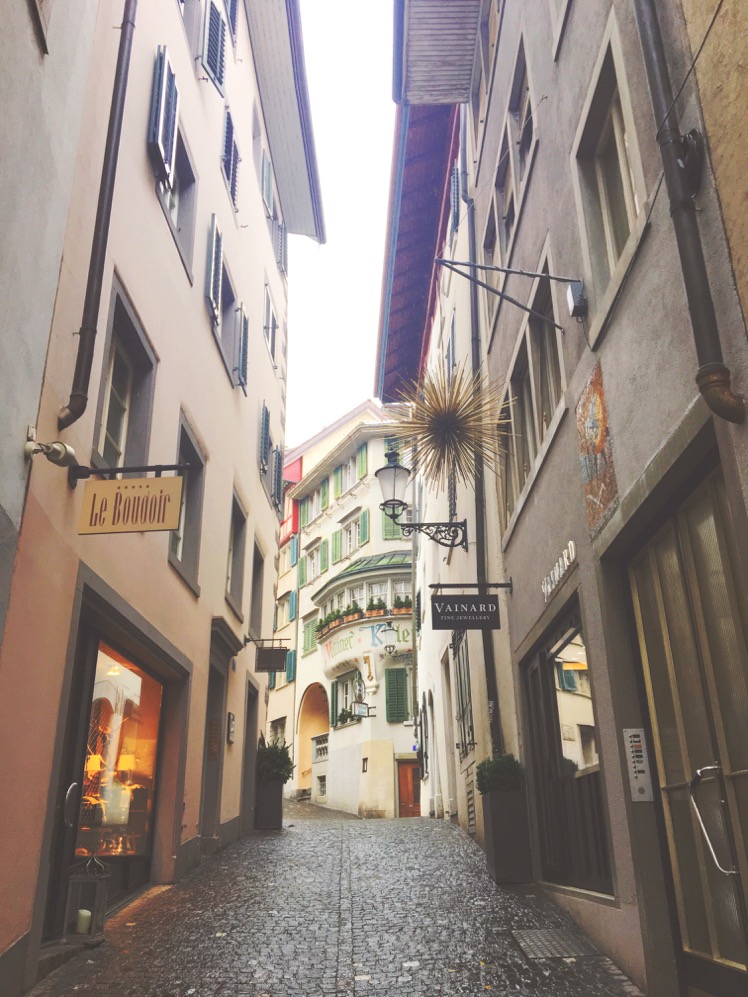 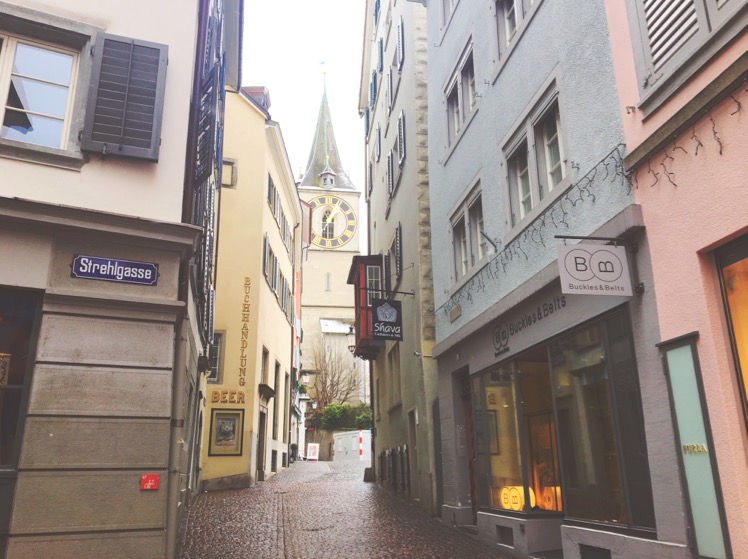 I found myself in the area near Augustinergasse, which is basically the cutest ever. Think: flower shops and major #DoorGoals every which way you look.

Nearby, I also found a water fountain filled with roses, which was…pretty much the most beautiful thing ever. I mean, come on! 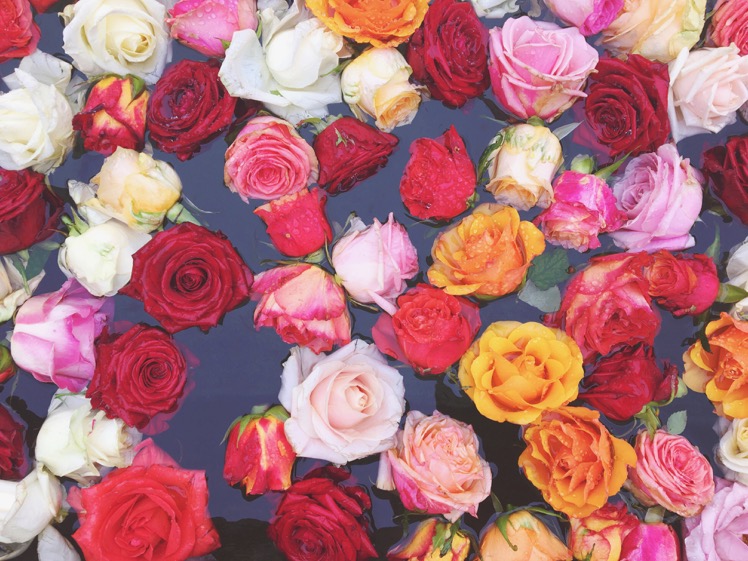 And Augustinergasse itself is in contention for the coveted “cutest street in Zurich” (or anywhere?) award. Rows of colorful buildings, need I say more? I need not. 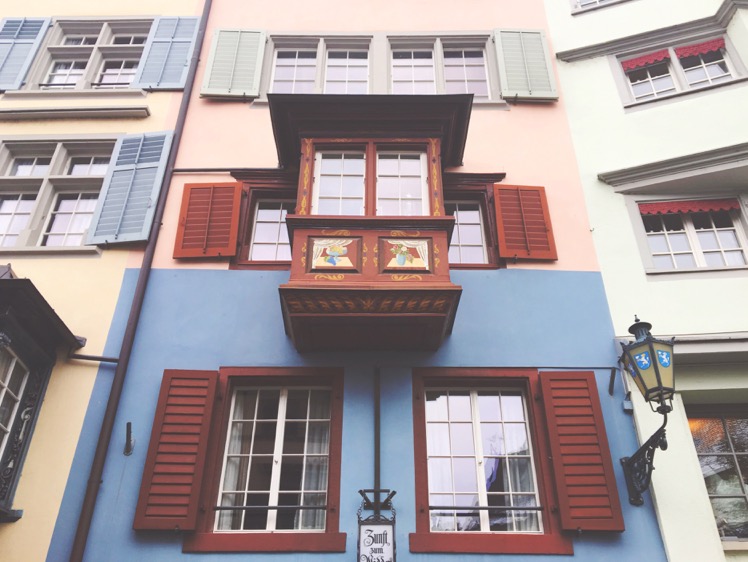 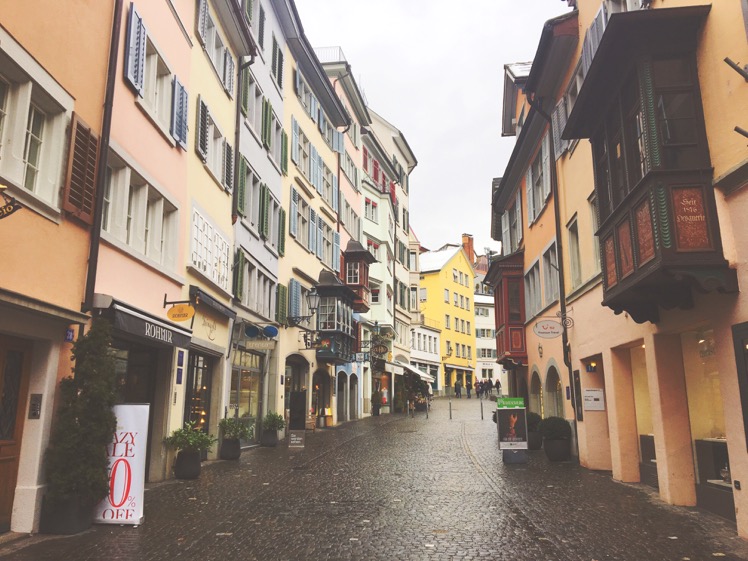 I’m not sure how I missed this last time I visited, but the Lindenhof – a park perched atop Zurich – has great views of town. It is definitely worth hiking up a few slippery, snow-covered cobblestone streets to see this:

And as I hiked back down from the Lindenhof, I learned that the surrounding neighborhood is pretty cute, too. Again, more to-die-for doors. 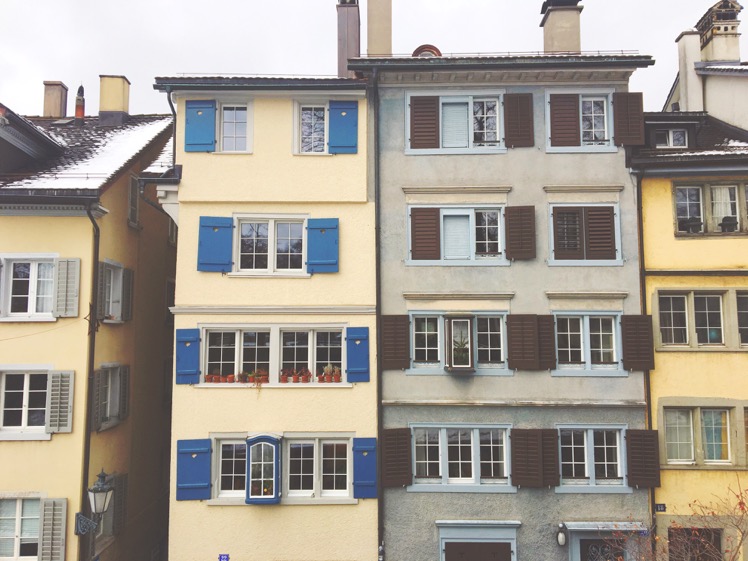 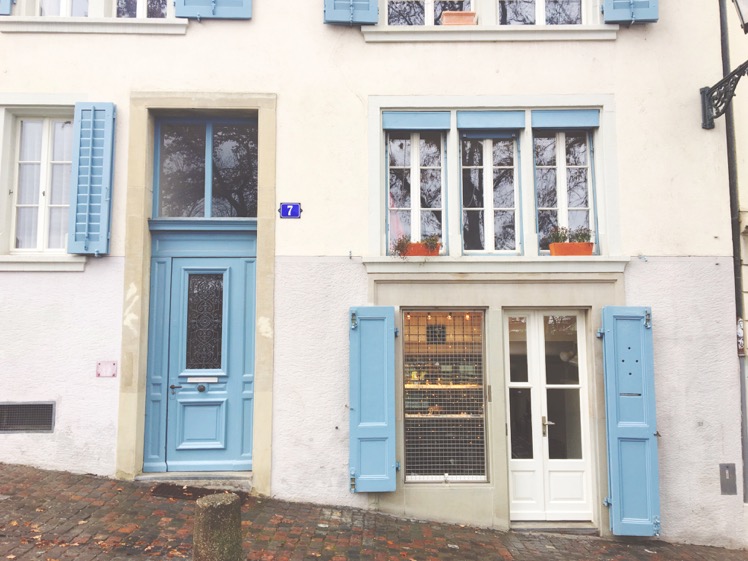 I had a cozy lunch at Mère Catherine, a restaurant specializing in provençal favorites. I got a big bucket of moules and frites, a glass of white, and had myself the most leisurely of lunches. 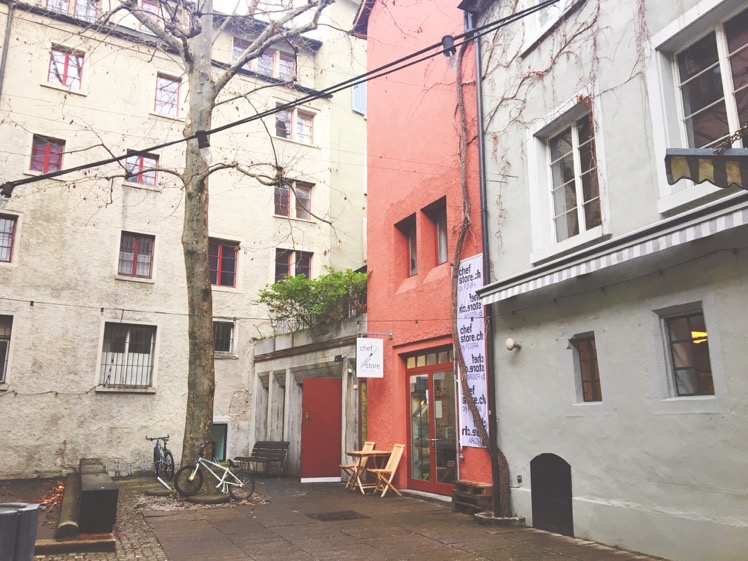 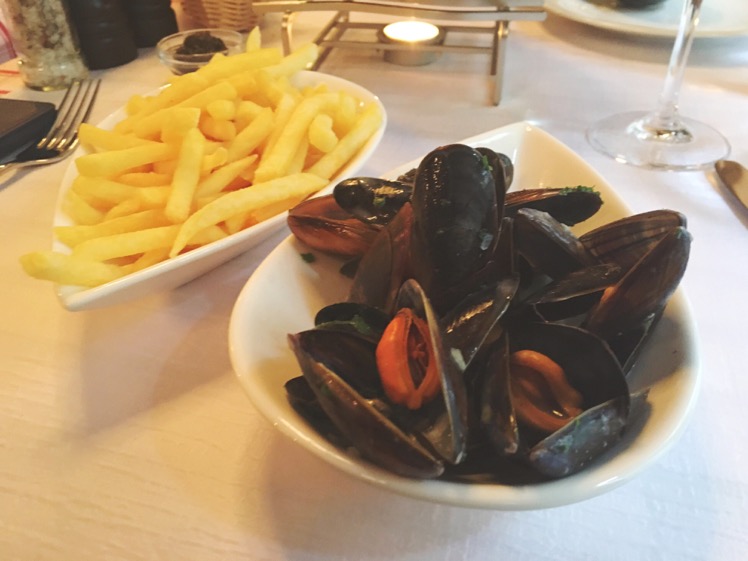 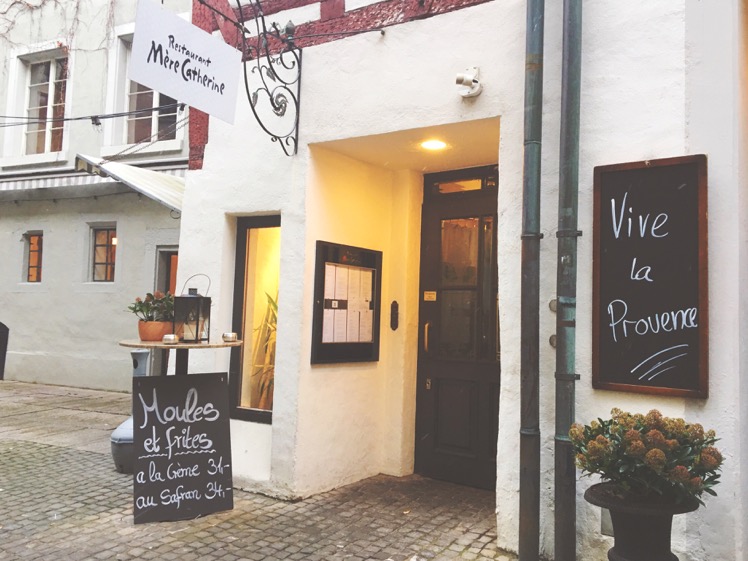 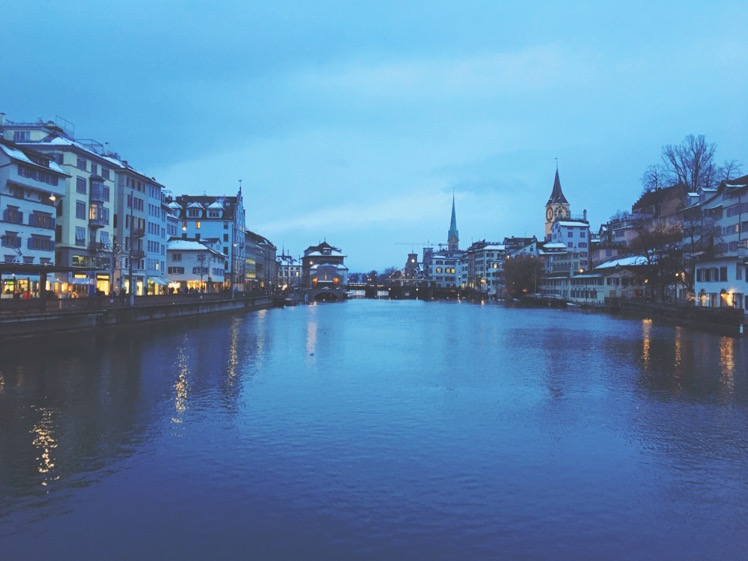 For dinner, I tried Zeughauskeller, a super traditional restaurant in the Old Town. It reminded of a German beer hall, almost: huge, bustling, and packed to the brim. There, I enjoyed one truly gigantic piece of wiener schnitzel: 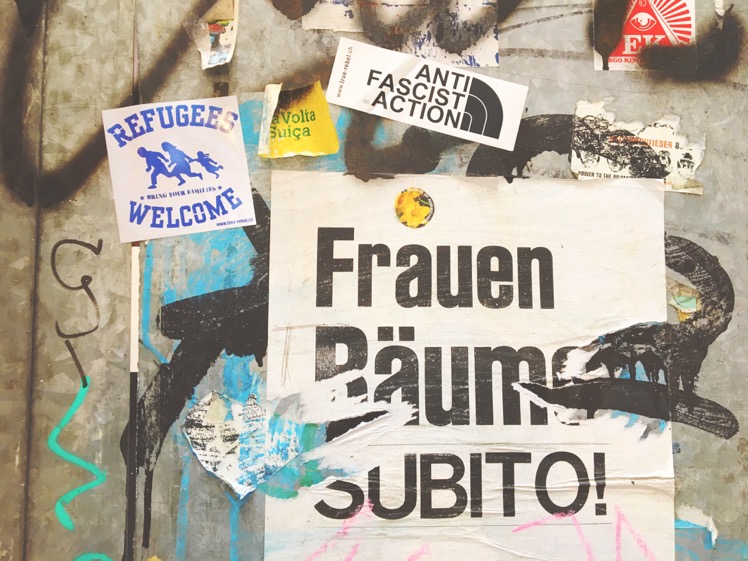 On my last morning in Zurich, I took a long walk around the lake. Well, not around it – that would be absurd – but I walked along it for quite a while. It reminded me of some of my favorite strolls along Lake Geneva. 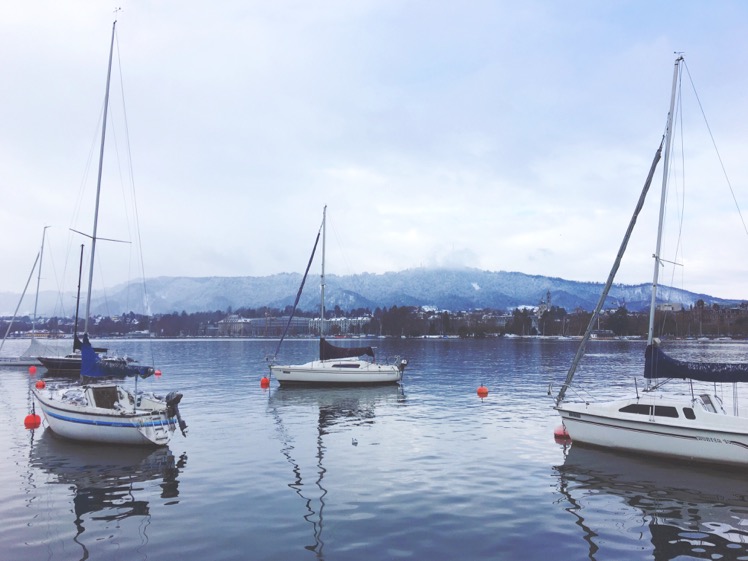 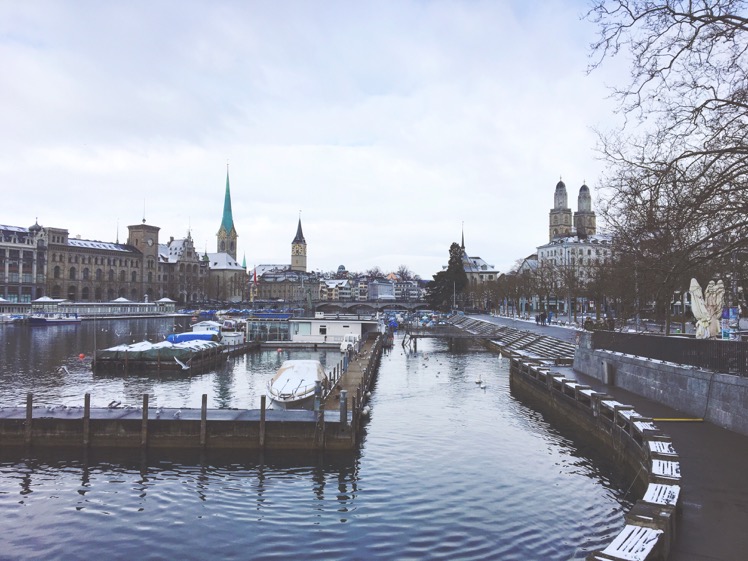 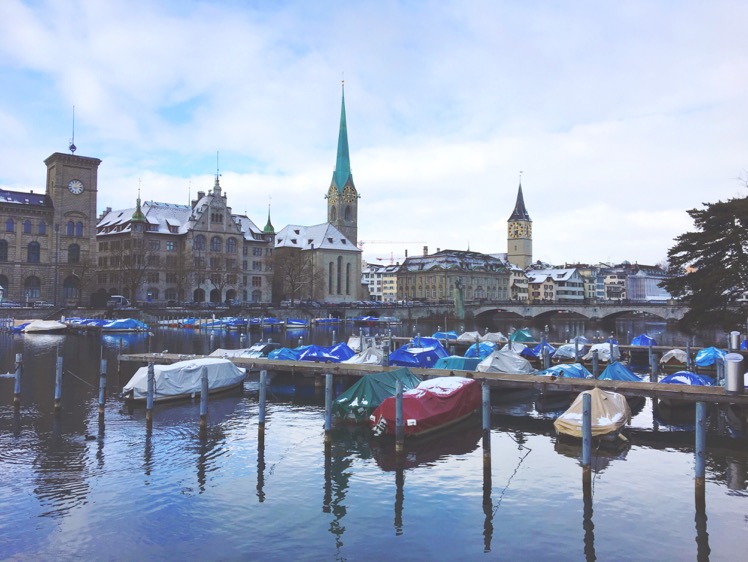 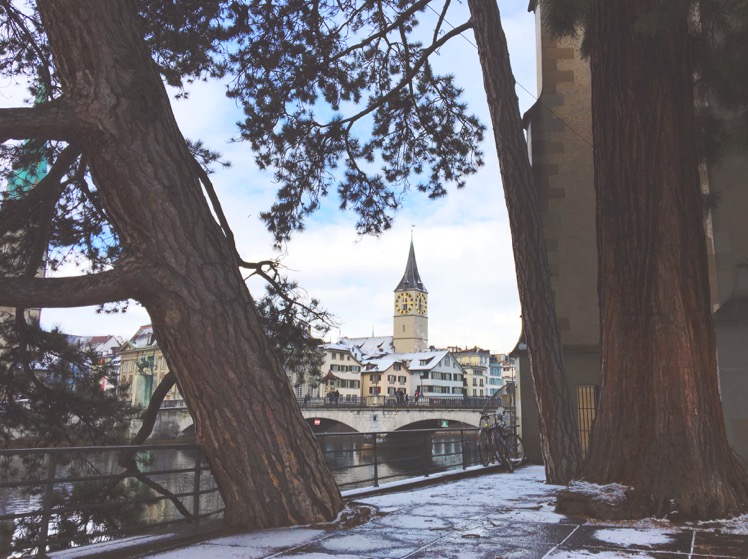 My last meal in Switzerland was a fitting one: a big ol’ pot of fondue. I have to admit that fondue is still not my favorite dish, but it felt mandatory to have it at least once while in town.

And then, it was back to the train station and back to Paris. But first, I paused to grab one last shot of the lovely city before I left. 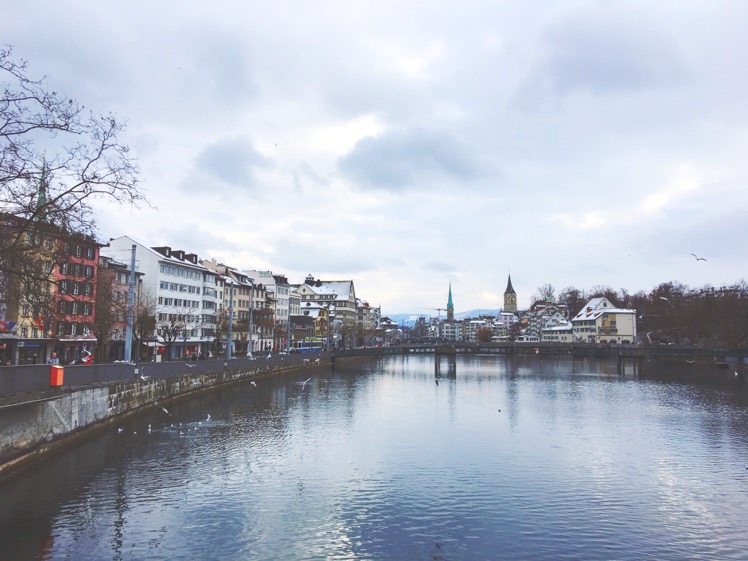 The Bottom Line: My weekend in Zurich was low-key but comforting or, in other words, pretty much just what I like. It’s not the most thrilling of destinations, but it turns out that Switzerland will always have a piece of my heart. And, in turn, I will always want a piece of its chocolate.

One thought on “Zurich: A Comforting, Chocolatey, Cheesy Return to Switzerland”