Upon returning from a trip, I always tend to gravitate toward that country’s cuisine for a while. And perhaps no country’s food has stuck with me quite the way Greek cuisine has; after my first trip in 2008, I became obsessed with all manner of Greek favorites: feta, spanakopita, moussaka, and more. While you can find great Greek food in the States, the fact is that nothing tastes so good as Greek food in Greece (the slabs of feta alone are worth the plane ticket). So, needless to say, when I returned to Greece last fall, I was quite pumped to revisit the culinary scene.

Wanting to make sure I left no foodie stone unturned, I signed up for Culinary Backstreets’s Plaka tour. I was intrigued by the promise of finding hidden gems in the Plaka, also known as the most touristy neighborhood in Athens. The Plaka is filled with hawkers trying to lure unsuspecting visitors into subpar restaurants, so I was interested in going beyond the tourist mainstays and finding out where the true gourmet spots were. And find them we did.

We began our day, naturally, with breakfast. It’s not uncommon to see busy Athenians starting their days with a koulouri (essentially a gigantic ring of sesame seed bread) and a coffee. We grabbed ours off a bright yellow cart; I was immediately taken by how enormous they were. 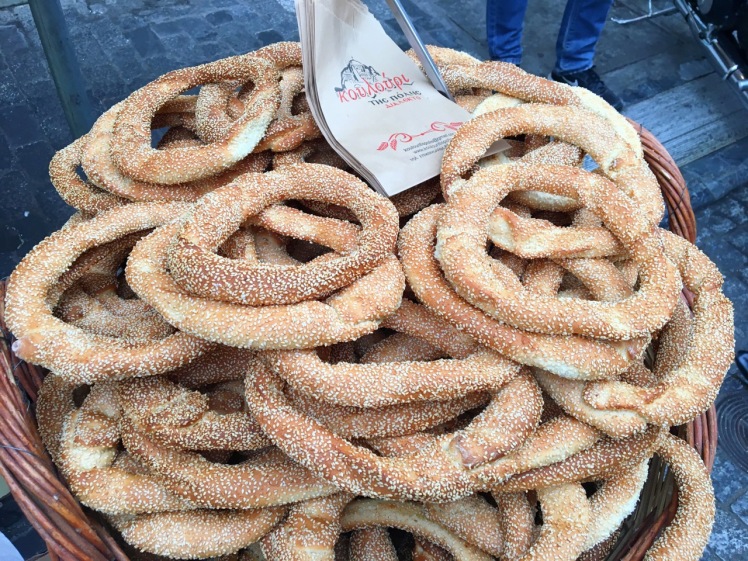 Our carb-fest continued at Pnyka, a nearby bakery. Our tour guide referred to Pnyka’s owner as a “bread evangelist,” a man dedicated to using natural and high quality ingredients. At Pnyka, we tried a bunch of goodies: a traditional spanakopita; a sesame, honey, and pistachio bar; an orange cake (incredibly sweet but so good); and a moustalevria, a traditional Greek grape pudding.

We stopped in one of Athens many little squares to try some homemade koliva, cups of which our guide whipped right out of his backpack. Koliva is boiled wheat mixed with walnuts, pomegranates, and a bunch of other goodies, and is traditionally eaten in Greece at funerals. 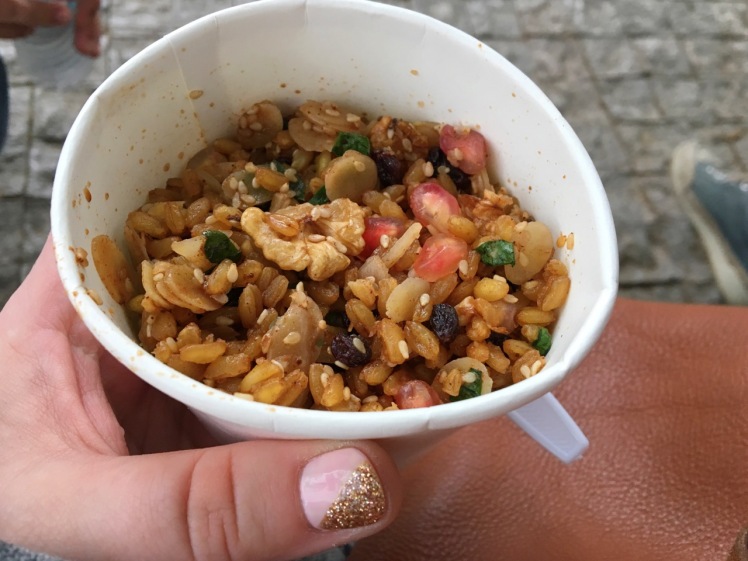 At Malotira Deli, we tried a variety of different bites: bread with a Greek salad spread, caper leaves, goat cheese, honey, and various liqueurs. The shop itself was extremely cute, and filled with a bunch of products I wish in retrospect I had brought home with me. 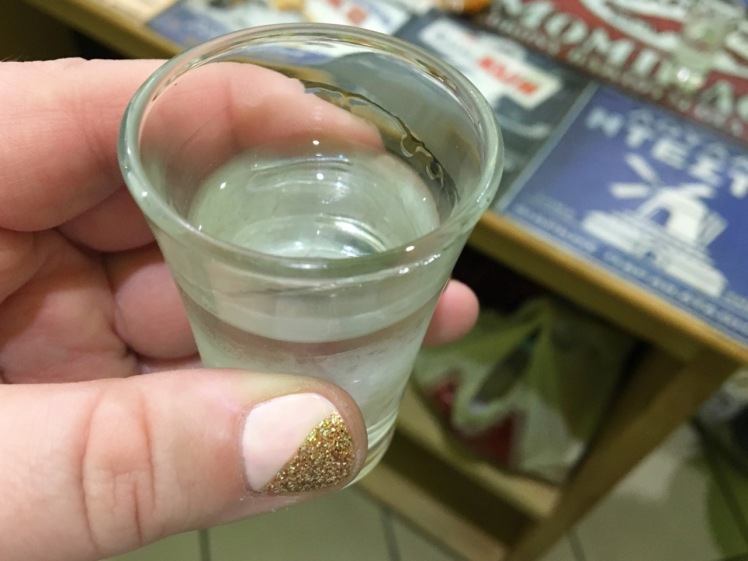 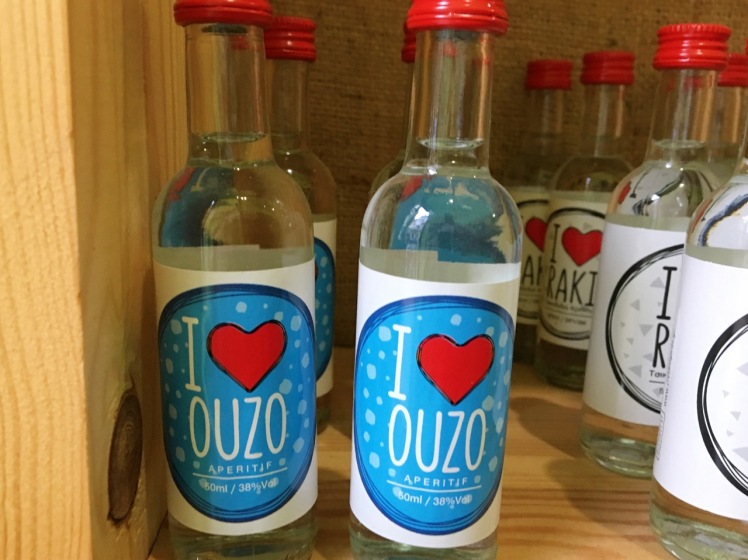 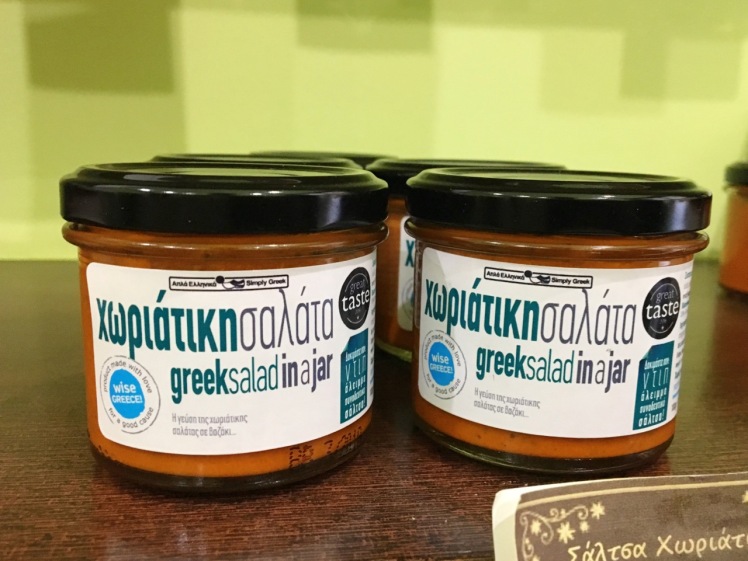 Not much says Greece like souvlaki, so of course our tour included a stop at a souvlaki shop. I didn’t catch the name of the place where we went and, to be honest, it was pretty nondescript, albeit damn good. We crammed in – the shop was tiny! – and ate our piping hot souvlaki at the bar, squeezed between several bewildered locals. 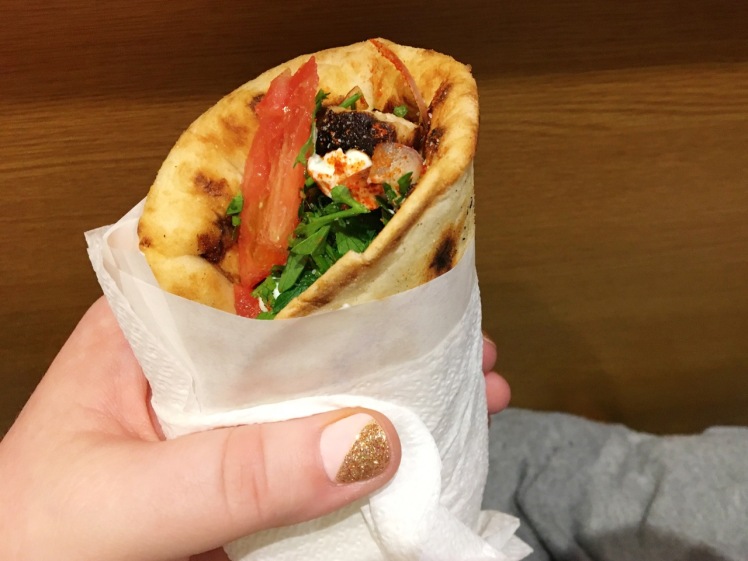 It rained on and off throughout our walking tour, so our coffee break under the awnings at O Glikis was particularly welcome. Of course it’s always a bummer to get semi-rained out while on vacation, but sitting in Athens, drinking a cup of very strong coffee while the rain drizzles around you is kind of nice in its own way, too.

By far my favorite stop of the day was To Kafeneio, a restaurant tucked in the shadows of the Acropolis. It’s a bit hidden away, so the crowd was more local than other Plaka haunts. As for the food? It was incredible! We had saganaki (pan-seared cheese) with honey, Greek salad in a gigantic edible pita cup, and meatballs with what our guide referred to as THE red sauce. I loved this place so much, I bestowed it with the highly coveted honor of being one of the best things I ate in 2016. 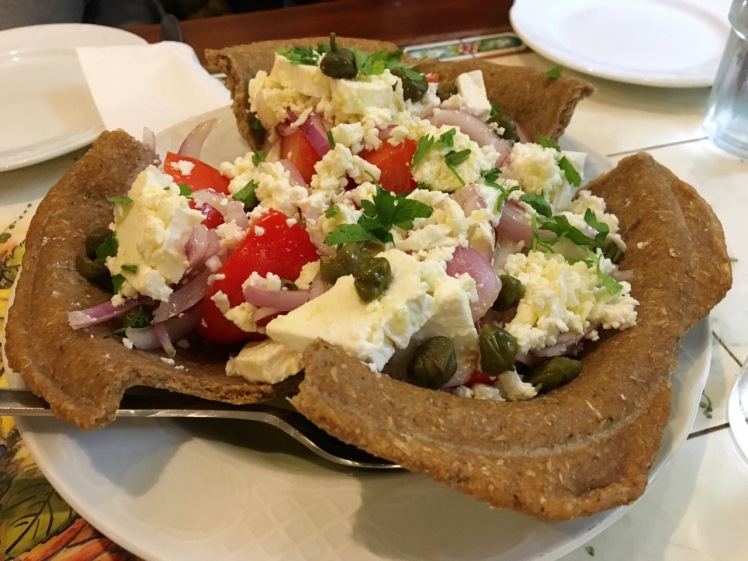 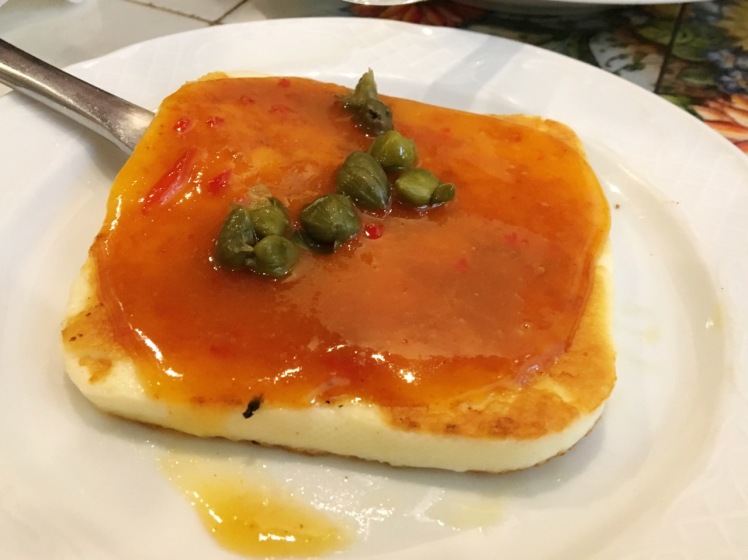 We finished our day of eating at a seafood restaurant whose name I did not catch. And, much like the saganaki place, this stop was relatively nondescript; I would have walked by without giving it a second glance. I would have been wrong to do so! We tried a bunch of amazing things here: puréed fava beans; grilled feta topped with tomato and peppers; codfish with garlic mashed potatoes (very garlicky but VERY good); and stuffed peppers with rice (real flavor bombs). 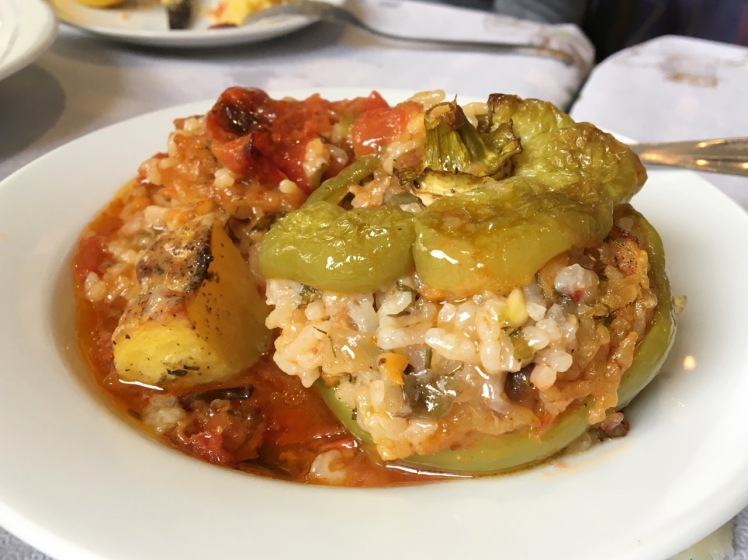 The Bottom Line: I cannot recommend taking food tours enough. I take them in almost every city I visit, and I’ve found some of my best bites and restaurants through them. Athens was no exception! Greek food is excellent, and can be found even in someplace as tourist-centric as the Plaka.