The last few years, for reasons both work- and personal vacation-related, I’ve found myself spending a lot of time in both Paris and London during the holiday season. And while there’s pretty much no place I’d rather be than those two cities, I figured it was time I gave my own city a bit more love during Christmas.

And so it was that I found myself getting up at dawn one Saturday morning, determined to be on 5th Avenue at the first light of day. Why so early? This area in particular becomes absolutely mobbed by tourists this time of year, and I wanted to look at the gorgeous window displays without having to constantly jockey for position. Happily for me, my early rising strategy worked perfectly, and I was able to view many of the windows along my route completely undisturbed. A Christmas miracle!

My plan was to walk down 5th Avenue with a few detours along the way. I started at the top, at Bergdorf’s, which always has some of the city’s glitziest windows. This year was no exception! The theme was “To New York With Love”, and each window was sponsored by one of seven local cultural institutions (think NYBG, the Philharmonic, etc.) 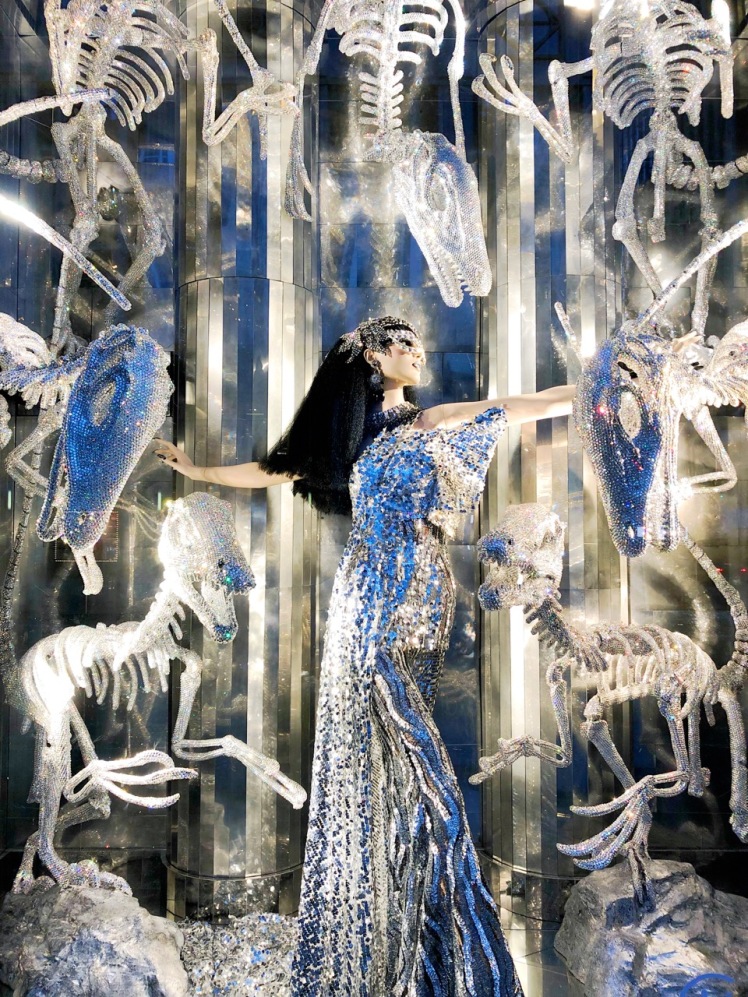 (Who doesn’t hang out with bedazzled dinosaur skeletons while in a ballgown?!)

Diagonal from Bergdorf’s is Tiffany’s, with its signature peacock plume lights:

I detoured a few avenues over to see the windows at Barney’s, which were a bit childish for my taste (though still fun!): 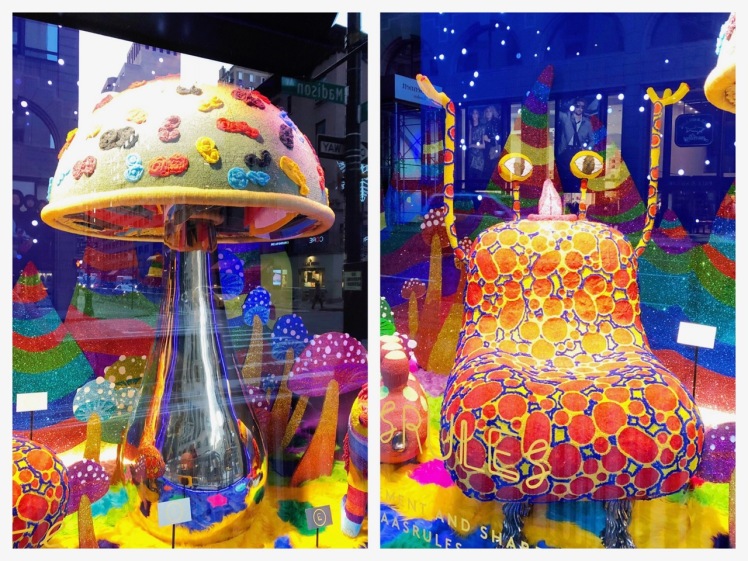 At Bloomingdale’s, the windows are The Greatest Showman-themed this year. They are as sparkly and extravagant as you would expect circus windows to be. 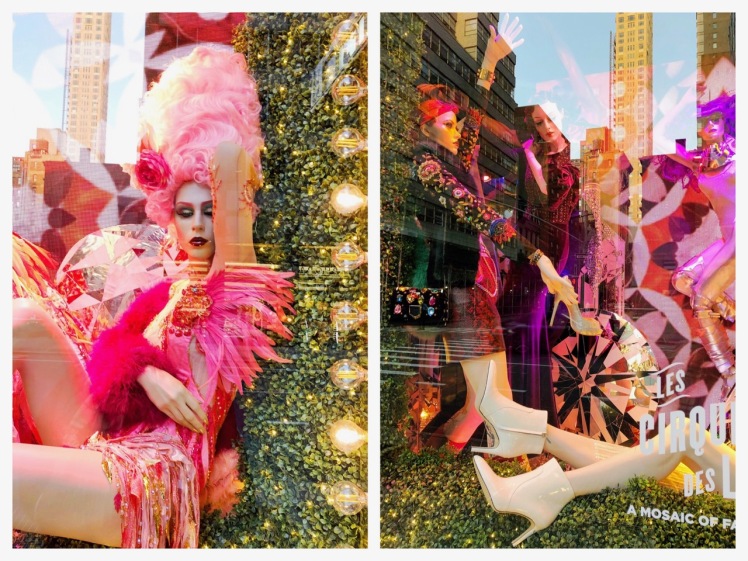 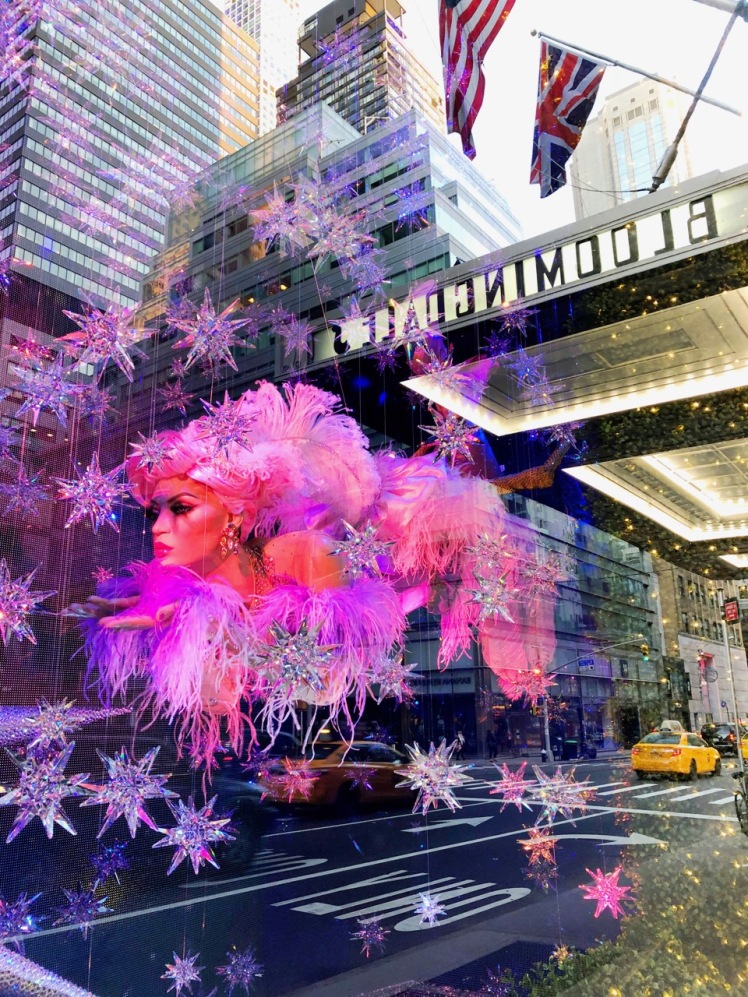 I love Cartier’s practice of literally wrapping their stores up in gigantic bows – isn’t it stunning? Their windows were pretty cute too.

Just across the street from Cartier, the Ferragamo store also had some jazzy decor:

One stop that I always wanted to visit but somehow never quite made it to was Lotte New York Palace, a luxury hotel with a stunning Christmas tree in the courtyard. I finally made it here and thank goodness: this might have been my favorite stop of the morning! 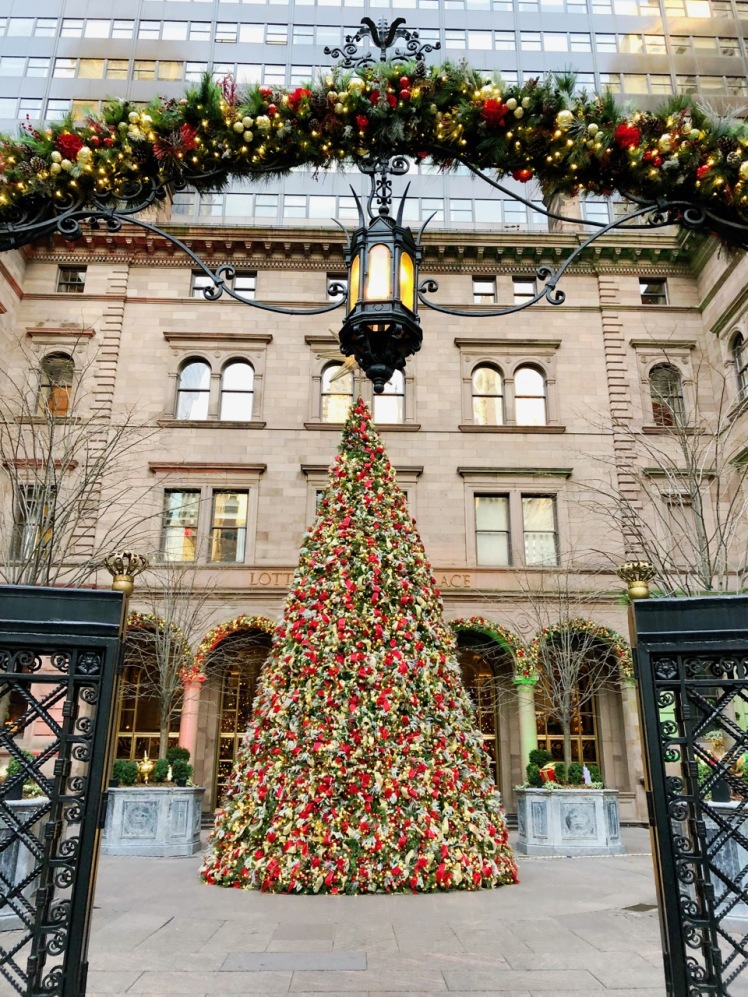 I stopped next Saks 5th Avenue, whose main windows this year celebrate the 80th anniversary of Snow White. These were nice but, honestly, I liked the windows on the side of the store even better, as they were filled with pure couture glamor. 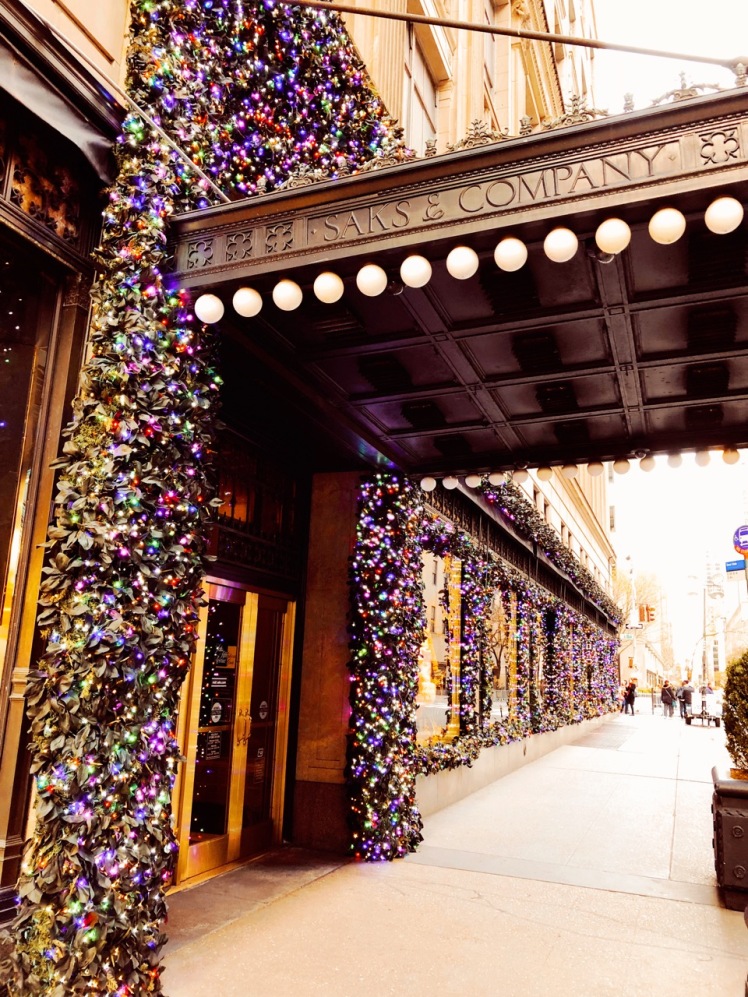 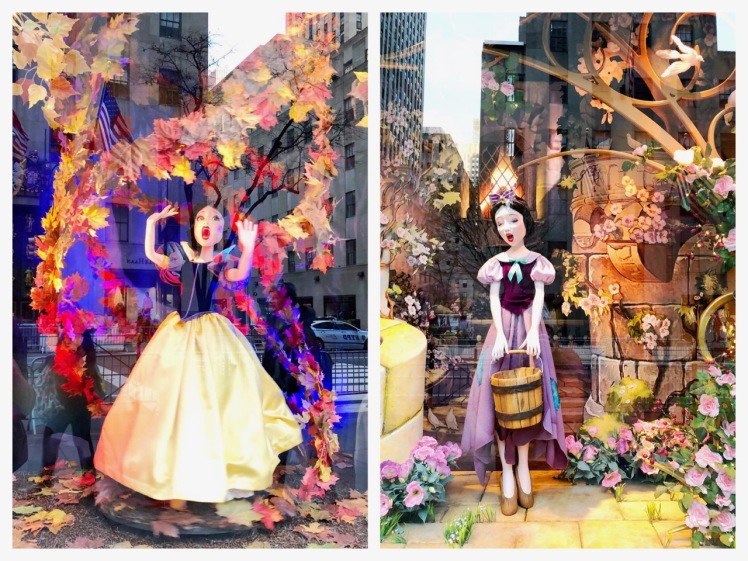 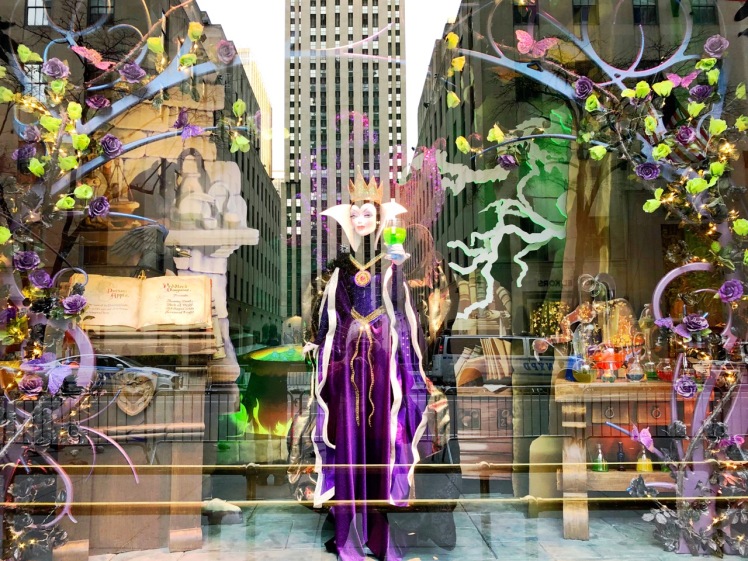 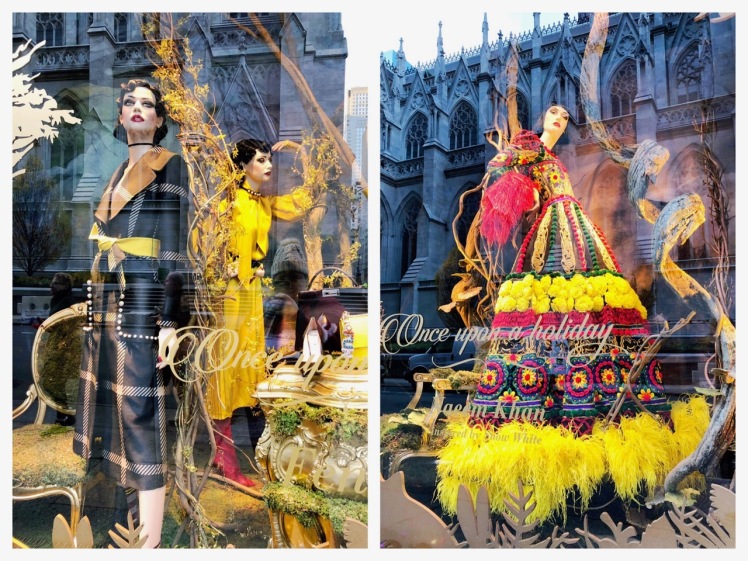 I also popped by Rockefeller Center to see the tree. Of all New York’s Christmas attractions, this is the one most liable to be a zoo – and though I was there around 9am, it was already beginning to get crowded! The tree is beautiful but, damn, it’s a hassle.

I continued down 5th, stopping briefly to pay my respects to the New York Public Library’s lions (who naturally get in on the holiday spirit too!): 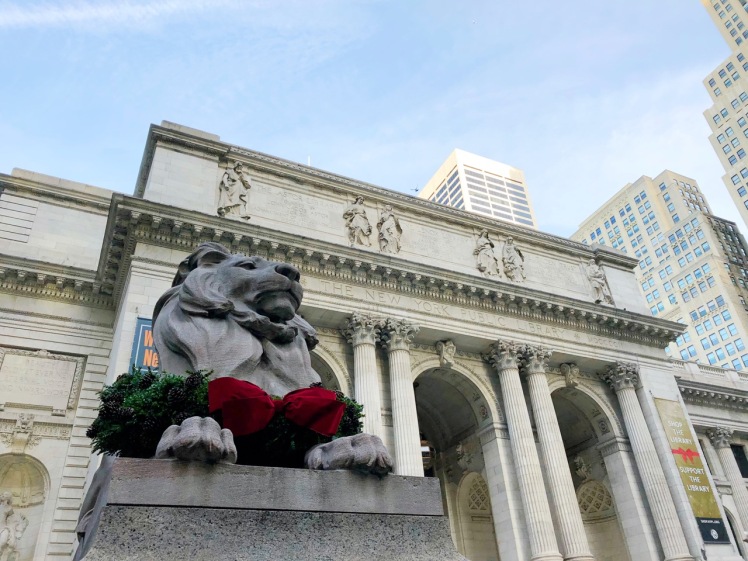 At Lord & Taylor, this year’s display is entitled “The Best and the Brightest.” Each window is meant to evoke the feeling that you’re peeking into a snow globe.

And finally, I ended my morning at Macy’s. Their windows, entitled “The Perfect Gift Brings People Together” celebrate New York City and Macy’s itself. They were fun! 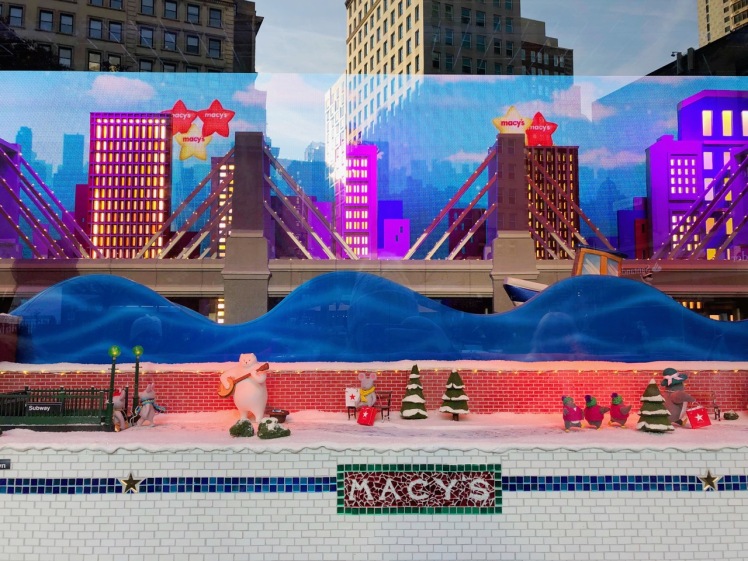 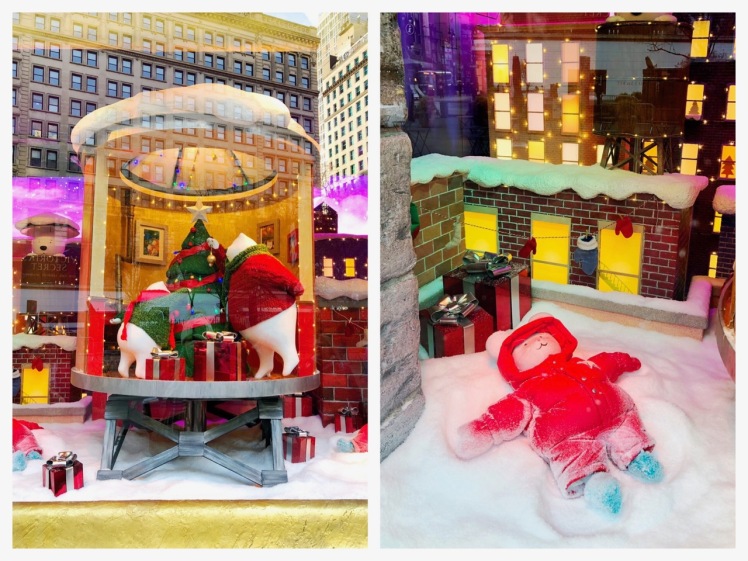 And so, with more than a little Christmas spirit in my heart, I headed back home … and promptly took a nap. New York is definitely a bit of a hassle during the holidays but, ultimately, worth it (if you get up very, very early, of course).

One thought on “New York: A Christmas Walk Down Fifth Avenue”