So…2017. Looking back, I’m not quite sure how to feel about this funny little year: it was a complete garbage fire for the world at large, but pretty successful, personally speaking. Let’s review. 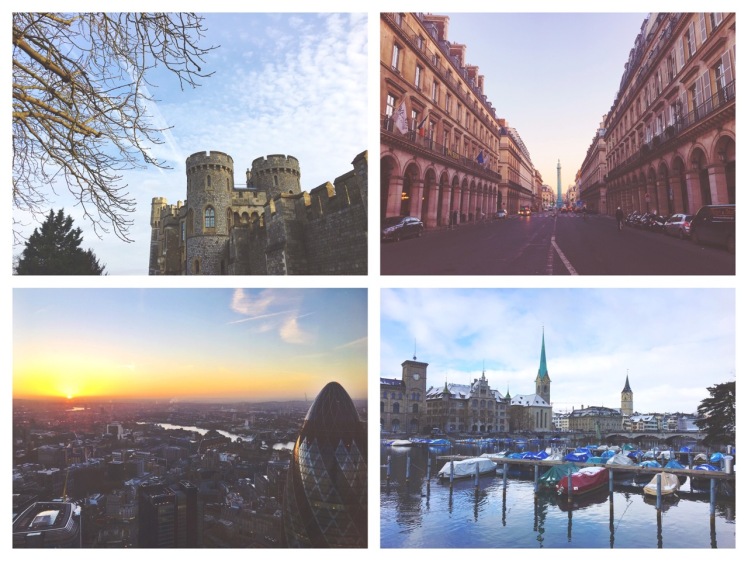 January: Kicked off the new year in London. Indulged in Pret-a-Portea at the Berkeley. Visited Fashion Rules at Kensington Palace. Took the loveliest of day trips to Windsor. Ate my way through East London (and London generally). Spent an elegant afternoon at Claridge’s. Indulged in the tasting menu at the Clove Club. Took an exclusive, small group tour of Buckingham Palace (so cool!). Photographed all the street art in Shoreditch. Traveled to Paris for work. Visited Fondation Vuitton. Ate many great Paris meals. Spent my birthday weekend in Zurich, sampling chocolate and cheese and braving snowstorms. Finally returned to NYC. Watched Johnny Weir skate in an exhibition at Bryant Park. Ate spicy curry at The Lucky Bee in the LES.

February: Had a lovely afternoon tea at the Ritz. Traveled to Curaçao and spent the most relaxing of long weekends at Lions Dive Beach & Resort. Explored the colorful corners of Willemstad, Curaçao. Saw Josh Groban perform in Great Comet on Broadway and became absolutely obsessed with the musical. Saw Jake Gyllenhaal in Sunday in the Park With George and became…not so obsessed with that musical. Saw Ben Platt in Dear Evan Hansen and was blown away by his talent. Explored Central Park and then worked from home during our big snow of the season.

March: Attended the annual tennis exhibition at Madison Square Garden. Had a lovely dinner with my sister at Cosme (and hung out together the next day as the city shut down for a “blizzard”). Moved offices at work, and acquired a standing desk in the process. Celebrated a friend’s birthday with a feast in Chinatown. Saw Sunday in the Park for a second time, but didn’t like it any better. Attended a friend’s divorce party (super fun, believe it or not!). Breakfasted at Lafayette Grand Café. Saw Amélie on Broadway, and liked it more than the critics did. Had the best and gossip-iest dinner at the Llama Inn in BK with girlfriends.

April: Made my annual pilgrimage to the Orchid Show at NYBG. Watched The Devil Wears Prada at Syndicated Bar with a bunch of Meryl Streep fans (so fun!). Took many springtime walks through Central Park. Perused the pysanky exhibit at the Ukranian Museum. Waited in a long line for a cup of cookie dough at Do. Went home to Michigan for Easter, and had my traditional post-airport breakfast with dad at Toast in Birmingham. Tried the (kind of disgusting) Unicorn Frappuccino at Starbucks. Saw Come from Away on Broadway (and cried a lot). Brunched at Pequeña in Fort Greene, Murray’s Cheese Bar in the Village, and Maison Pickle on the UWS. Took a meandering walk through Riverside Park. 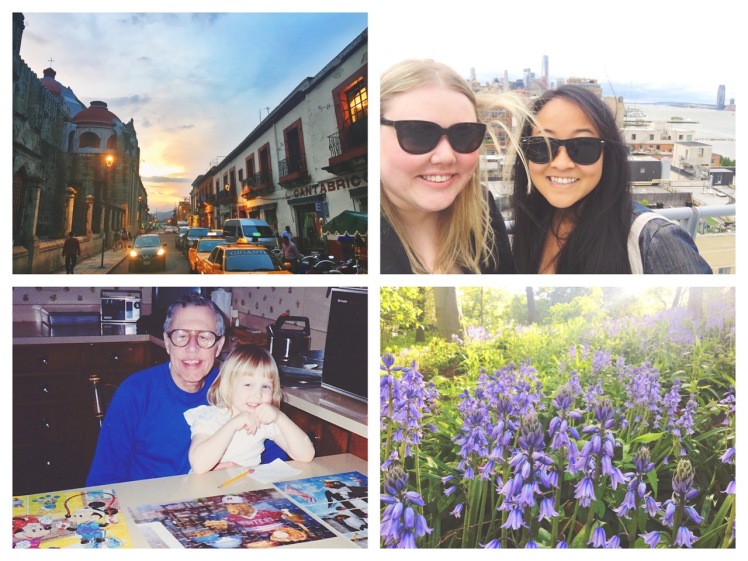 May: Stood in line to meet Doug the Pug at the Strand. Visited the Whitney with my BFF, then had lunch at Santina. Perused the annual Met Costume Institute exhibit. Saw Groundhog Day on Broadway. Went on a taco crawl, ate churros for breakfast, and battled the altitude in Mexico City. Admired the pretty colors and watched a lucha libre show in Puebla. Took a fantastic cooking class and went mezcal tasting in Oaxaca. Explored the ruins at Mitla. Relaxed by the Pacific Ocean in Mazunte. Flew home to Michigan for my Grandpa’s funeral.

June: Spent time with my family at home in Michigan. Browsed quirky CW Pencil Enterprise on the LES. Grabbed a coffee at the very pink Café Henrie. Breakfasted at Nomo Kitchen. Attended the Tony Awards! Saw Great Comet on Broadway again (and loved it even more the second time around). Explored the Jazz Age exhibit at the Cooper Hewitt. Spent time on the Upper East Side-side of Central Park. Ate a yummy lunch at Ivan Ramen. Tried the dessert tasting menu at ChikaLicious. Felt fancy during my office’s summer gala at the Plaza. Flew home to Michigan for our family reunion.

July: Attended my family reunion in Michigan. Tried the amazing pizza at Emily West Village. Signed a lease on a new apartment! Saw Anastasia on Broadway (but did not care for it). Went to Nashville for a girls weekend, where we ate hot chicken at Hattie B’s, listened to live music downtown, and visited a farmers market. Spent an afternoon hanging out on Lake Waccabuc with my colleagues. Saw Hamlet, starring Oscar Isaac, at the Public Theater (super weird). Brunched at La Pecora Bianca. 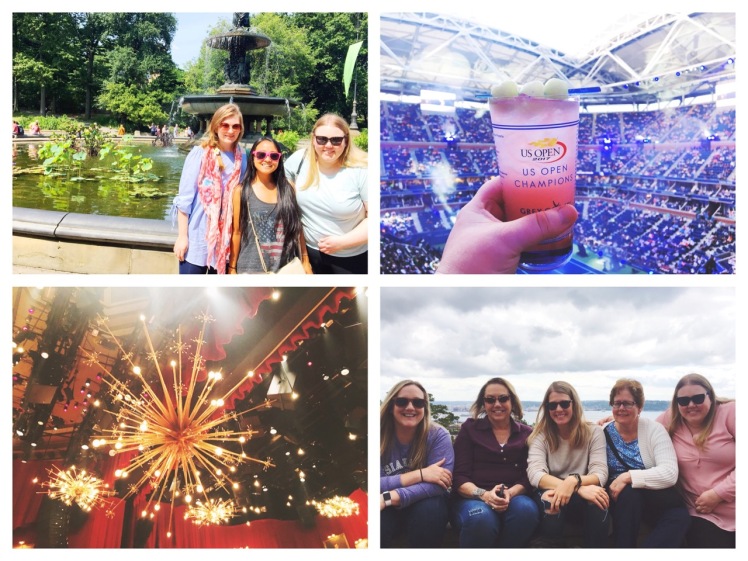 August: Got a beehive wax pedicure (weird but good). Visited the Chihuly Museum, rode the ferry, and spent lots of good quality time with family in Seattle. Packed up my apartment and got ready to move! Took a daytrip to Detroit for work. Finally went rowboating with friends in Central Park. Attended opening night of the US Open for the third year running. Saw Great Comet a few additional times before it closed (officially my favorite Broadway show EVER).

September: Went to Mackinac Island with my family. Finished packing up my old apartment (far too much work). Moved into my new apartment – and loved it so, so much! Hosted my Mom in town for the weekend. Saw Come From Away and dined at the Standard Grill with Mom. Had a crazy month at work. Flew to Spain for vacation with my sister! Explored Gaudi’s Casa Battlo in Barcelona.

October: Daytripped through the Catalan wine (and cava!) region. Explored La Boqueria and ate paella in Barcelona. Took an amazing cooking class and ate at three different Michelin restaurants in San Sebastian. Visited the Guggenheim Museum in Bilbao. Went on a wine and tapas tour, relaxed in Retiro Park, and bought cookies from cloistered nuns in Madrid. Toured Palacio Real and caught a flamenco show in Sevilla. Explored the amazing Alhambra in Granda. Had the incredible tasting menu at Babu Ji and pancakes at Bubby’s when my Dad visited NYC. Cooked my first meals in my new apartment.

November: Survived trial craziness at work. Became obsessed with the HQ Trivia app. Went to Michigan and Indiana for Thanksgiving weekend. Spent a Saturday morning at the Louis Vuitton exhibit downtown. Brunched at Cafe Alto Paradiso (dat cinammon roll tho). Got up early to snag a cheap ticket to Hamilton London! Put up my Christmas tree obscenely early (no regrets). Saw Lady Bird twice – my favorite movie of the year. Got the iPhone X! Cried – and marveled over Nia Vardalos’s performance – while watching Tiny, Beautiful Things at the Public Theater.

December: Saw the Rockettes Christmas Spectacular (and visited the Rockefeller Tree after). Walked down 5th Avenue, checking out all the gorgeous holiday windows. Went to the Nutcracker at Lincoln Center with a few friends after work. Attended the Bryant Park tree lighting. Had boozy brunch in Brooklyn. Relaxed for an hour in a salt cave (really). Finally got Global Entry. Visited the Union Square and Columbus Circle Christmas markets. Went home to Michigan for Christmas. Traveled to London to end the year, where I had tea at the Goring, saw the Harry Potter exhibit at the British Library, and stocked up on goodies at Fortnum & Mason.