Well, here we are, already a month into 2019, and I haven’t finished writing about much of 2018. Though it’s more than a little late, I love recapping my best eats each year, and I couldn’t let 2018 go by without a recap either. As far as foodie years go, this was a good one, highlighted by both the expected (everything in Paris, duh), and the unexpected (Philly, who knew what culinary marvels you contained?). Here are the best things I ate in 2018.

One: The Tasting Menu at Res Ipsa (Philadelphia)

This list is not ordered, but if it were, this meal would be my number 1, by a mile. I’ve been feeling disenchanted with tasting menus lately – perhaps burned by far too many that were expensive but not actually, you know, good – but this was a great tasting menu. The dishes were all simple, but so damn delicious, from the delightful gnocchi arrabbiata to the spaghetti alle vongole with the tastiest broth to the rich chocolate mousse to finish. Honestly, I’d go back to Philly just for this meal. 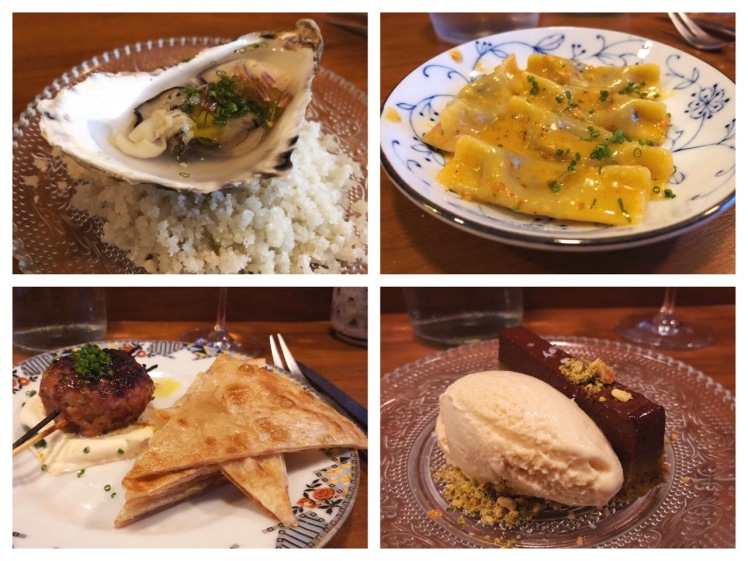 Words I would use to describe Le Rigamarole: unique, inventive, creative, thoughtful (and probably many more, but this post is long enough). Even though I didn’t love every single dish I was served, I appreciated what they were trying to do with each one. And the ones I loved were really great: fried spring onions (salty perfection), a grilled oyster with black garlic oil (I stan for oysters, always), and a dessert of almond, pistachio, and chocolate (like a gourmet version of the indulgent chocolate, peanut butter, Special K bars I make at home).

There are a lot of tried and true dessert combinations, and then there are some that are a bit further afield. Take for example rye bread ice cream, mixed with chocolate, and topped with whipped cream and rhubarb syrup. Rye bread in Iceland is actually somewhat sweet (even cake-like), meaning that it makes for a perfectly delightful – not to mention surprising – dessert accompaniment.

Guelaguetza isn’t a Mexican restaurant (no burritos here), it’s Oaxacan, and it’s pretty great. It doesn’t look particularly remarkable from the outside, and it’s probably a place I wouldn’t have found on my own had someone not taken me here, but it’s definitely worth a stop. We ordered one of the family style options and were delivered a feast: piles of meat, cheese, beans, and guacamole. Everything was phenomenal, and we all left completely stuffed.

Five: Oysters with Roasted Chilis at the Smoking Goat (London)

I’m pretty sure I include at least one oyster on this list each year, and this year I have multiple. But who can pick favorites when they’re all so good, including these oysters with roasted chilis. I love an oyster with a nice contrasting accompaniment, and these chilis were just that. I am a notorious spice wimp, and these certainly had a kick, but I enjoyed them regardless.

As if French toast weren’t decadent enough on its own, the good folks at Green Eggs Café decided to make it even more so, packing it with cookie dough and topping it with chocolate chips and syrup. Rich, crazy tasty, and impossible to finish in one sitting, this was pretty spectacular as far as splurge dishes go.

I feel a bit silly listing these on my “best of” list – aren’t they basically just fancied up toast? – but oh boy did I love them. The toppings were super flavorful; in my journal, I wrote that they were “tiny little flavor explosions,” and I stand by that. If I lived in Paris, I’m pretty sure I would come here for breakfast All. The. Time.

The Barbary can best be described as cozy – it’s all counter seating, and they pack you in – but a smidgen of discomfort is worth it when the food is this good. I’m a terrible blogger who wrote down zero about what the components of this dish were, but all I know is that the octopus and garnishes were all flavorful AF and oh so good. 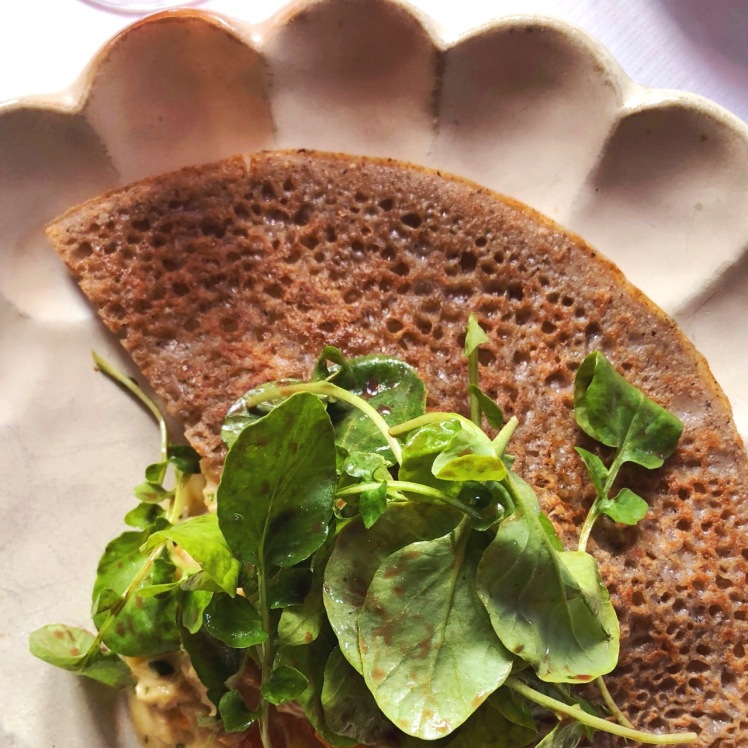 Probably my favorite new restaurant in NYC last year was La Mercerie, a delightful if somewhat overpriced French restaurant in SoHo. I’ve had several great meals there, but my favorite dish just might be their chicken crepe. It consists of what can best be described as a classy chicken pot pie filling in a perfectly cooked crepe. Yum.

Ten: The From Rome with Love Pasta at Pink Mamma (Paris) 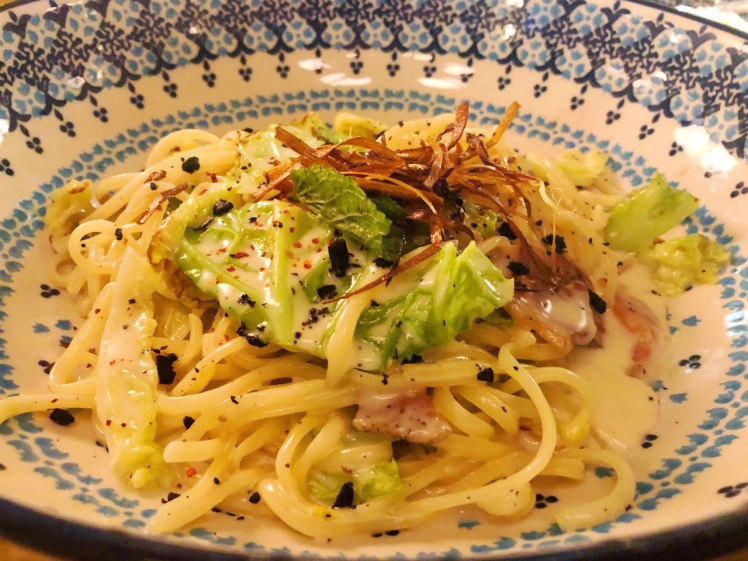 When it comes to service, I wasn’t a big fan of Pink Mamma. Happily, though, the food was on point, particularly this pasta. Made with guanciale (pork cheek), pecorino, leek, cabbage, and mint, this was a fab pasta, rich – but not overwhelmingly so – with good salty notes.

Eleven: The Scallops at Kol (Reykjavik) 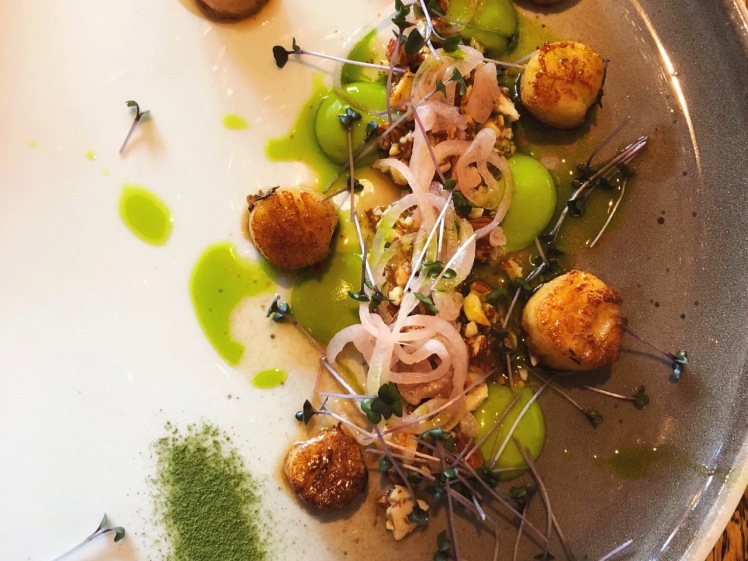 These weren’t just scallops; they were scallops served with dill mayo, almond praline, pickled shallots, langoustine bisque, and a bunch of other accoutrements I can’t even recall, save for the fact that I know they were good. The plate was packed full of interesting flavors, textures, and tastes, and I was very there for that.

I know, I know. A scone on a best of list? How can something so simple be worthy of inclusion? And, if a scone were to make the list, wouldn’t it be from one of the teas I had in England last year? It defies explanation, but goodness, I really did love these. A study in contrasts – the perfectly flaky exterior and the perfectly soft interior – these bad boys are not to be missed.

A food blogger I follow described these as “like an artisanal Reese’s Cup,” and that was reason enough for me to seek them out. And am I ever glad that I did: these were damn, damn tasty. My only regret is that I didn’t buy a few extra to take home.

An odd combination, and not one that I ate simultaneously, of course, but I loved these two components of my meal at Sportello. The ravioli were delightful little flavor bombs; my only complaint was that the portion was small and I could have happily ate a plateful. And, as someone who usually opts for a chocolate or caramel dessert, the coconut cake was a departure for me – but such a rich, tasty, and satisfying one at that. 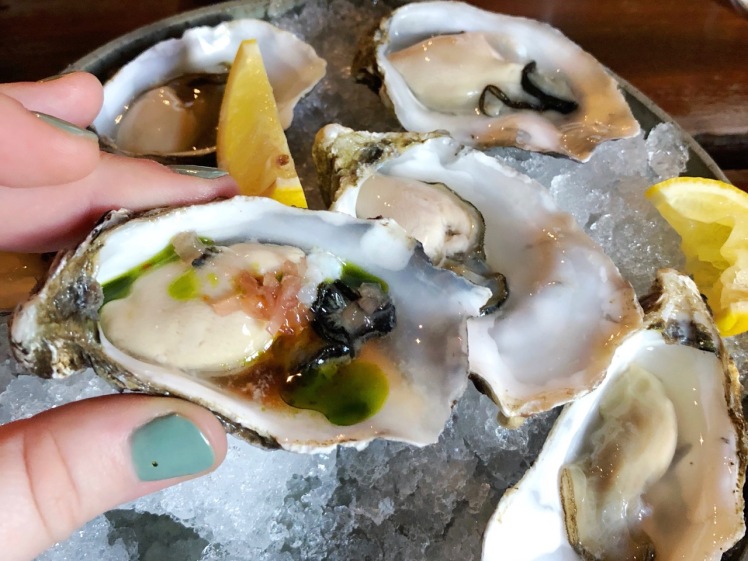 Yep, oysters again! These guys were perfectly fresh – seriously, like taking a gulp of the sea – and accompanied by interesting, tasty garnishes. Who can argue with that? 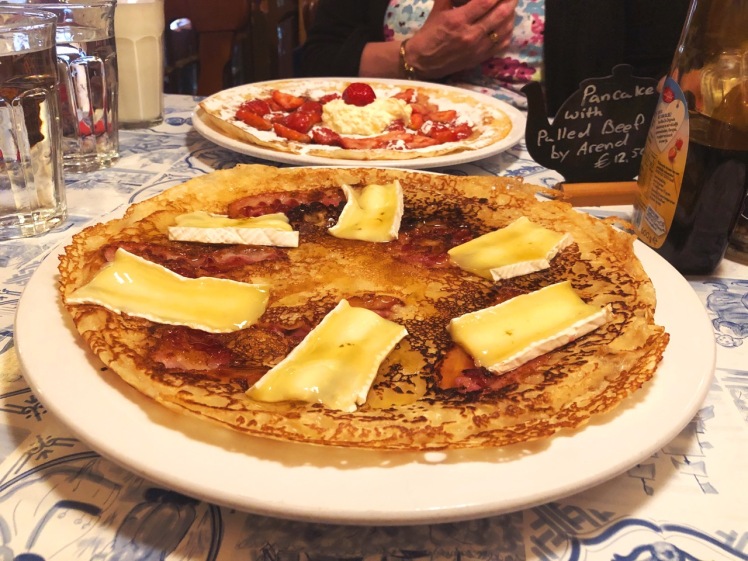 When they say this restaurant is “upstairs,” they aren’t joking: it’s up the narrowest, scariest staircase I’ve ever walked upon (we even had to walk backwards down it on our way out!). But if you can brave the stairs, it’s worth it, as their pancakes (more like what we would call crepes) are quite awesome. I had the “Kai,” made with honey, bacon, and brie, and it was straight up delish.

Little Fatty serves up Taiwanese soul food, which is not a food genre I knew I was missing in my life until I went there. We ordered a ton of dishes to share, and all were excellent. My favorite was the orange chicken – it was nothing like the orange chicken you might have at your typical Americanized Chinese restaurant, but it was damn good.

While the entire tasting menu at Pramerl & the Wolf was solid, the food didn’t truly wow me until I got to the dessert course. First, there was a cheese course meant to mimic a deconstructed spaetzle (pictured above on the right), and then there was a dessert of walnut, grape, and candied radicchio. Both dishes were so unique and inventive; I quite simply could not get enough. 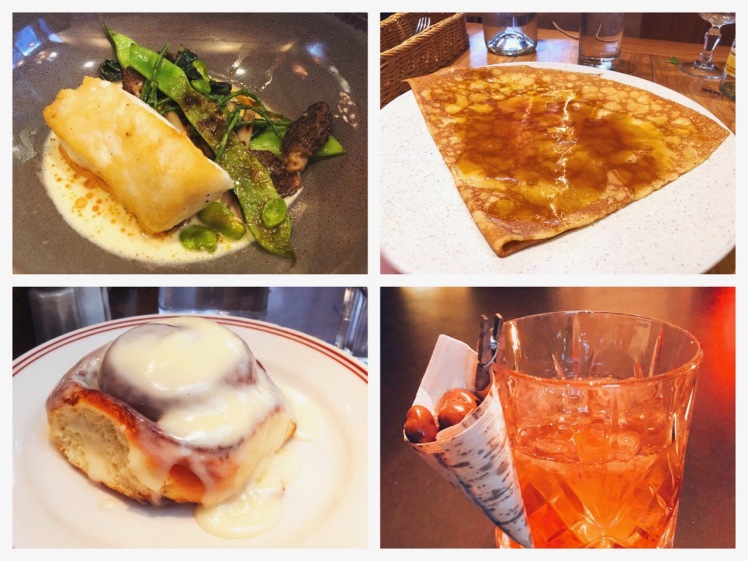 Honorable Mentions, Part 2 (clockwise from top left): the meatballs at Polpo (London); Jerusalem cheesecake at Balagan (Paris); the tasting menu at Dill (Reykjavik); the chocolate and caramel tart at A Room in the West End (Edinburgh).