Reykjavík is a relatively small city but, to my great delight, it’s also a really good city if you are a foodie. Though prices feel a bit like they range from exorbitant to sell-your-firstborn high, if you’re willing to endure the sticker shock, you can have some great meals.

I began my time in town by joining a food tour with Wake Up Reykjavík. Led by Ben and his assistant Eva, we wandered through the heart of the city, stopping at six places along the way. We began at Íslenski Barinn, home to Icelandic comfort food (our guide told us that all their recipes are from grandmas). We tried the Icelandic lamb meat soup, which was super tasty, and washed it down with Einstök white ale. We also had the chance to sample Iceland’s most notorious dish – fermented shark. It’s universally hailed as disgusting, but I ate my piece very quickly and covered it with a slug of beer so, luckily, I didn’t really notice the grossness. 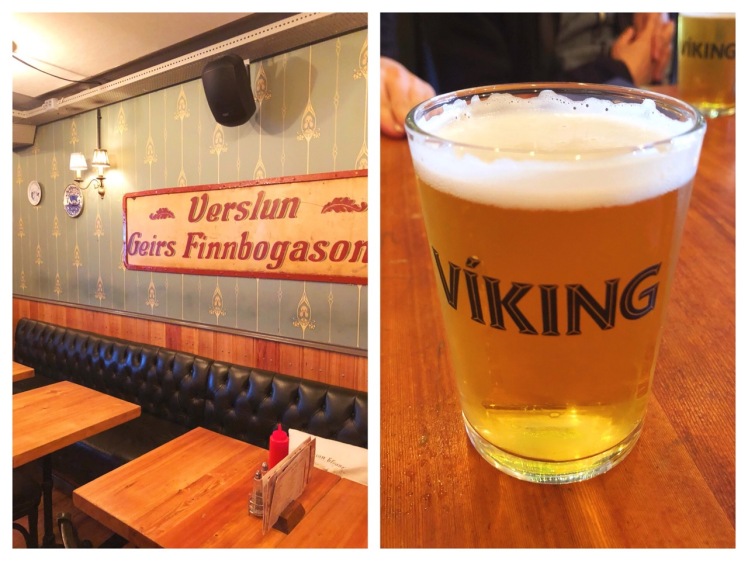 Next, we visited Ostabúðin, a gourmet deli where we sampled three cheeses and three meats. Our cheeses were a black gouda, a gull ostur (an Icelandic brie that literally translates to “good cheese”), and a blue cheese. Our meats were a beef cured in thyme and paprika, a horse cured in rosemary, thyme, and curry, and a wild goose with raspberry and champagne vinaigrette (super tasty!). 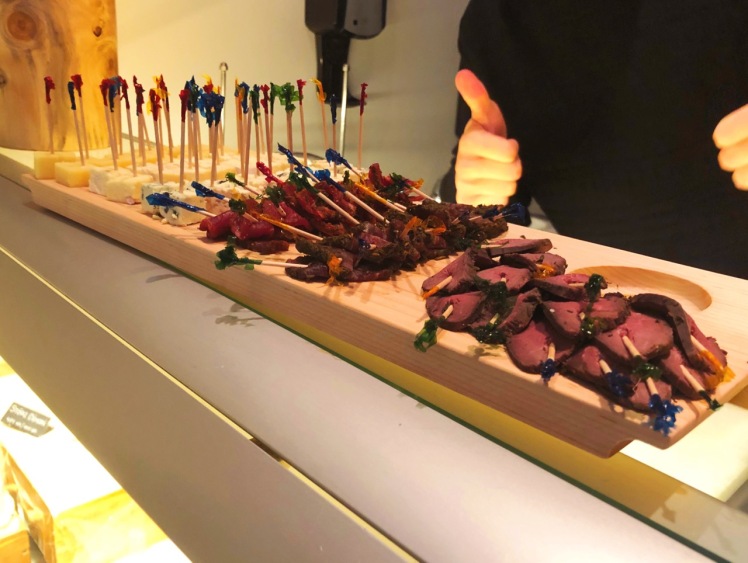 At Café Loki, we tried one of the more unique ice creams I’ve ever had, rye bread ice cream! Mixed with chocolate, topped with whipped cream and rhubarb syrup, and tasting much sweeter than you expect rye bread to taste, this was seriously delicious. I even counted it among the best things I ate last year.

We followed up our dessert with … seafood at Messinn. Here, we tried plokkfiskur (aka cod stew) and arctic char with honey and almonds. While the cod stew was fine, the arctic char was truly to die for; I loved the addition of the crunchy almonds to the dish. 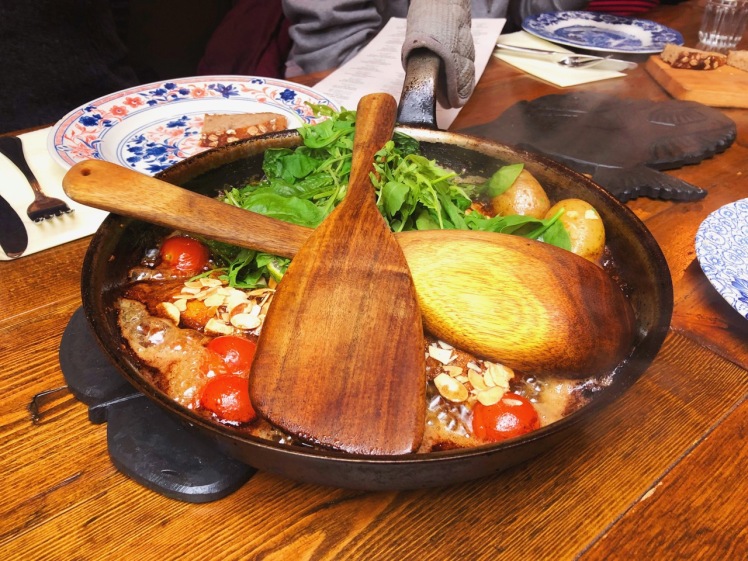 At Bæjarins bestu, we had one of Iceland’s most beloved treats: the hot dog! “Bæjarins bestu” literally translates to “the town’s best hotdogs,” and while I have no point of reference, I will say that it was damn good. Even though I typically eat my hot dogs plain (I know), I decided to do as Icelanders do and get one with everything, which means mustard, ketchup, remoulade, regular onion, and deep fried onion. It was great!

We finished our tour at Apotek, where we had coffee to drink and a chocolate mousse with raspberry filling for dessert. What I liked most about this food tour was how varied it was – we really tried everything, from dishes I had heard of to things that were way further afield. Needless to say, I was stuffed!

Outside of the food tour, I had plenty of other amazing meals in Reykjavík. And, while not a meal, one of the first things I grabbed once I arrived in town was a cinnamon roll from Braud & Co. From the minute I walked in the door at this bakery and was hit with the most incredible smell, I knew this would be amazing – and it was.

At Sandholt, I grabbed a breakfast not unlike what I could get at home: eggs, bacon, and sourdough bread. While not the most adventurous meal, it was very satisfying.

For my first dinner in town, I stopped by Kol, which was fantastic. To start, I had the scallops. But these weren’t just scallops; the plate was positively packed with all manner of things, including dill mayo, almond praline, pickled shallots, and langoustine bisque. So many interesting (and delicious) textures and tastes!

For my main, I had the salmon with fennel escabeche, dill apples, aioli, granola, and dill hollaindaise. This was my least favorite part of the meal (not that it was awful by any stretch). I did not especially care for the dill apples and there were lots on the plate. I did, however, love the other bites, especially the granola.

To finish, I had white chocolate cheesecake with blueberry and thyme parfait and granola. I really loved this – again, the dish had so many interesting textures and was so delish.

My second dinner in town was at Mat Bar, where I ordered a bunch of small plates: goal cheese with walnuts and flatbread; bok choy with chili, oranges, and almonds; and lamb belly with red onion and fennel salad. Everything was super tasty, though the bok choy was almost too spicy for me (a notorious spice wimp). 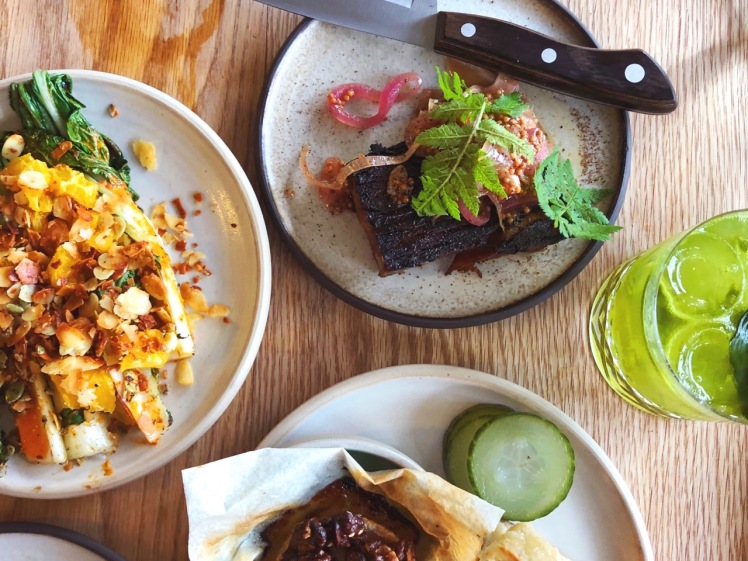 I grabbed lunch at Matarkjallarinn Food Cellar, a restaurant situated – as the name suggests – in a basement (though never fear; it’s still light and cheery). I had a nice meal here, getting the tuna tartar with wonton and avocado to start, arctic char with ginger, almond, and goat cheese for my main, and the chocolate lion bar with raspberries and salted caramel (drizzled tableside!) for dessert.

My final meal in Reykjavík was a big one: the tasting menu at Dill, also known as the first restaurant in Iceland to earn a Michelin star. Specializing in “New Nordic” cuisine, Dill features a 7-course tasting menu that changes based on what’s available that day. Many of the dishes were veggie-focused, so the meal didn’t feel as unbearably heavy as some tasting menus I’ve tried. Everything was very rustic and local and inventive. I was bummed because they made me sit at the bar (the eternal curse of the solo traveler), but otherwise the meal was lovely.

And with a very full stomach (and, let’s be honest, a cinnamon roll in my bag), I made my way back to New York. If I’m lucky enough to return to Iceland (which I hope to do one day), I cannot wait to taste what else Reykjavík has to offer.